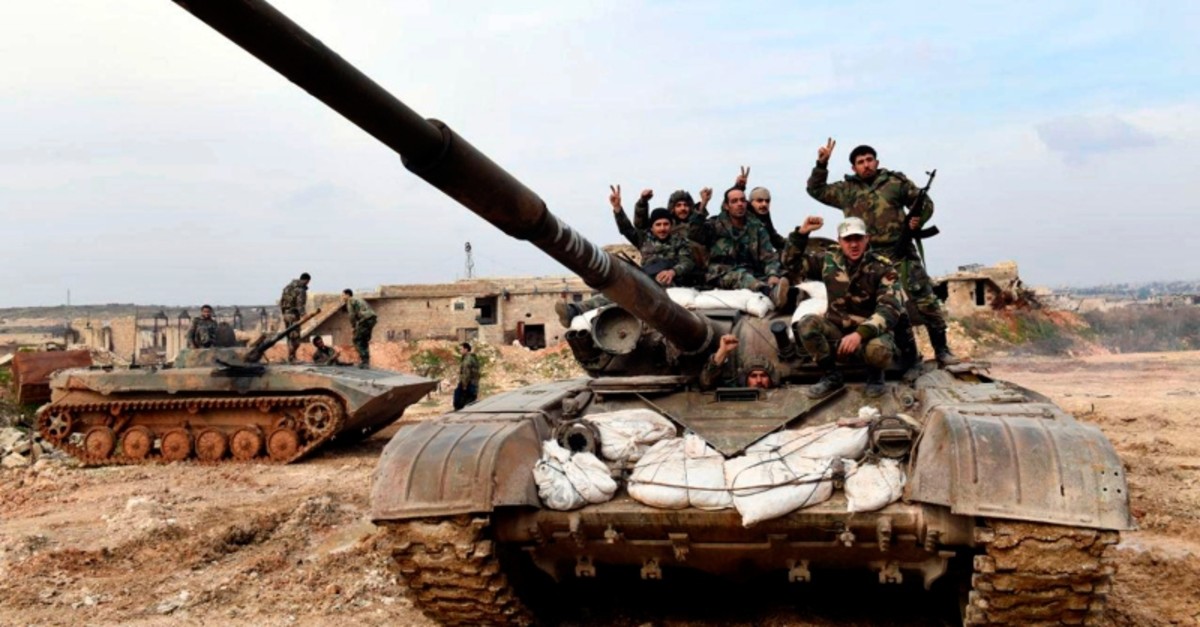 This Monday, Jan. 27, 2020, photo, released by the Syrian official news agency SANA, Syrian regime soldiers flash the victory sign as they stand on their tank in western rural Aleppo, Syria. (SANA via AP)
by Daily Sabah with AFP Jan 28, 2020 5:17 pm

Maarat al-Numan in the northwestern province of Idlib "is fully encircled and regime forces have started to storm a western section of the town," which is mostly deserted after months of bombardment, the Britain-based Syrian Observatory for Human Rights said.

"Fighting is now going on inside," said Observatory head Rami Abdul Rahman, adding that regime and Russian warplanes are pounding the area.

Maaret al-Numan lies on the M5 highway linking Damascus to Syria's second city Aleppo, a main artery coveted by the regime as it tries to rekindle a moribund economy.

It is also the second biggest urban center in the beleaguered opposition bastion of Idlib in northwestern Syria, and has been outside regime control since 2012.

Damascus loyalists have since Friday seized more than 23 towns and villages around Maaret al-Numan, fully encircling it, the Observatory said.

Meanwhile, the Turkish Defense Ministry said Tuesday that Turkey will not hesitate to retaliate if its observation points are threatened as Syrian regime forces advance through Idlib province.

The regime's violence has displaced around 358,000 people in Syria's northwest since December, the United Nations said.

In areas north of Maaret al-Numan, bombardment by regime ally Russia has prompted a fresh wave of displacement in recent days, with hundreds of vehicles packing a key exit route toward areas near the border with Turkey, according to the Observatory.

Most were fleeing the town of Saraqib and the Jabal al-Zawiya region, both of which are located north of Maaret al-Numan.

Russia has bombed areas around the main exit routes, despite the heavy outflow of civilians, according to the Observatory.

Misty Buswell of the International Rescue Committee warned the latest escalation "will only add to the humanitarian catastrophe that is already unfolding."

The Idlib region is home to 3 million people, half of whom have already been displaced from other parts of the country.