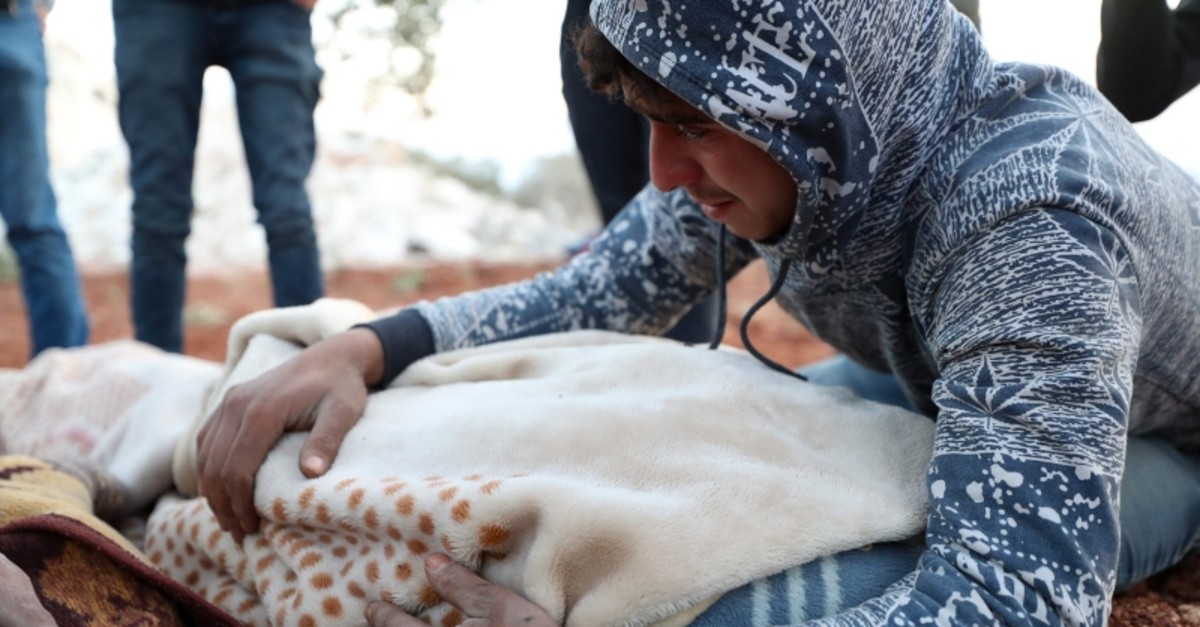 A young Syrian man mourns over the blanket-clad body of a child, killed along with six other members of a family, in a house hit in a reported airstrike by pro-regime forces in the town of Sarmin in the northern Syrian Idlib province on Feb. 2 (AFP)
by Daily Sabah Feb 02, 2020 7:48 pm

Russian and Bashar Assad regime warplanes targeted the city of al-Bab controlled by the Turkey-backed Syrian National Army (SNA) early Sunday, marking yet another violation by Moscow of the Sochi and Astana agreements. A Syrian civil defense group announced that the air strikes have killed at least 11 civilians.

According to local sources, a Russian jet took off from Hmeymim airbase in western Syria's Latakia on Saturday night and targeted the city's Sheikh al-Doshel mosque and two other places in the first airstrike since 2017. A video captured by locals showed the aftermath of the airstrike.

The Syrian opposition aircraft observatory said Russia targeted villages near the town of Saraqib, as well as the district of Darat Izzah in Aleppo.

In the wake of attacks, additional military vehicles were deployed on Sunday to Turkey's border provinces of Gaziantep and Hatay.

President Recep Tayyip Erdoğan said last week that Turkey would change its stance if attacks on civilian areas of Idlib continued. The area has seen the death of nearly 2,000 civilians and the displacement of hundreds of thousands more in recent months.

The latest military deployment following Russian and regime attacks included howitzers and armored vehicles positioned in towns along the border.

Turkey, already a host to nearly 4 million refugees, recently announced that it will not accept fresh waves of refugees from northern Syria. Despite the warnings, however, the regime's offensive continued Sunday with the capture of six more villages in southern Idlib. During recent airstrikes by the regime and Russia yesterday in Idlib, nine civilians were killed, the U.K.-based Syrian Observatory for Human Rights (SOHR) reported. It said seven of those killed were all members of one family in the town of Sarmeen.

Assad regime forces, backed by Russian air support, made rapid advances in Idlib last week, capturing the town of Maarat al-Numan, located about 100 kilometers (60 miles) southwest of al-Bab. The district lies on the M5 highway linking Damascus to Syria's second city Aleppo, the main artery coveted by the regime as it tries to rekindle a moribund economy.

In areas north of Maaret al-Numan, bombardments by regime ally Russia have prompted a fresh wave of refugees to emerge in recent days, with hundreds of vehicles filling a key exit route toward areas near the border with Turkey, according to the SOHR. Most have fled the town of Saraqib and the Jabal al-Zawiya regions, both located north of Maaret al-Numan. Russia has bombed areas around the main exit routes, despite the heavy outflow of civilians, the Observatory added.

Despite number variations, between 400,000 and 700,000 civilians, according to several sources, have left their homes and found shelter near Turkey's southern border. U.S. special envoy for Syria James Jeffrey said on Thursday that some 700,000 people had fled toward the Turkish border, raising the specter of an international crisis. According to German charity institution Welthungerhilfe, between Dec. 1 and Jan. 29, some 520,000 had already fled from Idlib. Speaking to Deutsche Welle, the Syria director of the charity, Halil Kurt, said that the migrants are in a dire humanitarian situation: "73% of those people need urgent food aid," Kurt said.

Last week, Erdoğan said Ankara's patience regarding continuous attacks by the Assad regime in Idlib province is running out, adding that Turkey would take a new stance in the face of its interlocutors' failure to abide by the Astana and Sochi agreements.

"Unfortunately, Russia hasn't abided by either the Astana or Sochi agreements. We have waited until now, but from this point, we are going to take our own actions. This is not a threat, but our expectation is that Russia will give the regime the necessary warning," he said.