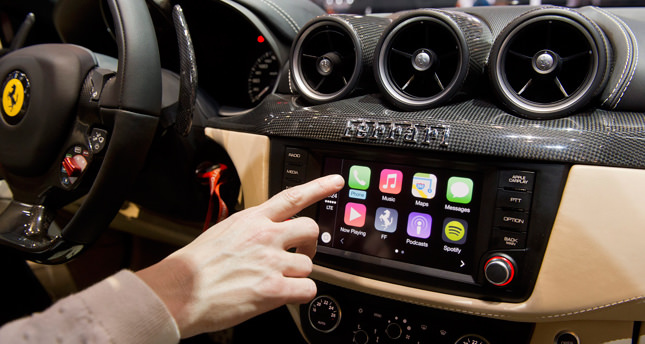 Apple is accelerating the race to make smartphone applications easier and safer to use in cars, with Ferrari, Mercedes-Benz and Volvo already interested in the technology that is also developed by competitors

Istanbul (Daily Sabah) - Making its debut at Apple's World Wide Developers Conference (WWDC), Apple showcased its originally named "iOS in the Car" to the world last year in Geneva, Switzerland. Now referred to as "CarPlay," iPhone intends for its new invention to take the automotive industry by storm. It is designed to allow the driver to access their iPhone and utilize all its apps through an inbuilt dashboard.

With Siri (as the driving force or behind the wheel navigating), "CarPlay" can be accessed through a light-enabled iPhone, and controlled through a touchscreen and an onboard button. Users will then be able to access iOS apps. It is intended to support iTunes radio, allow drivers to make calls, listen to their voicemail and receive alerts and messages through the touchscreen. The "Maps" app will guide the driver turn-by-turn through the infotainment system on the dashboard. "'CarPlay' has been designed from the ground up to provide drivers with an incredible experience using their iPhone in the car," Apple Vice President Greg Joswiak said in a statement. "iPhone users always want their content at their fingertips and 'CarPlay' lets drivers use their iPhone in the car with minimized distraction. We have an amazing lineup of auto partners rolling out 'CarPlay,' and we're thrilled about its debut this week in Geneva."

Apple stated that "CarPlay" will be available in cars featuring iOS7 and higher, and will be available in vehicles within the year. Car companies such as Ferrari, Mercedes and Volvo will be amongst the first to show off the new stylish dashboard. BMW, Ford, General Motors, Honda, Hyundai, Jaguar Land Rover, Kia, Mitsubishi, Nissan, Subaru, Suzuki and Toyota are amongst those who have pledged to include "CarPlay" in future models. Apple's innovative creation is fuelling the fire of the fast paced technology industry in entertainment with Microsoft, BlackBerry and a host of other companies filling the gap in the automotive market. Google announces its intention to introduce Androids in cars in an attempt to stay in the race.

Apple came out with all guns blazing and paved the way for others to follow. This new creative invention is no exception to the rule. Apple is linking its users with the iPhone to other aspects of their lives, infusing technology with entertainment.