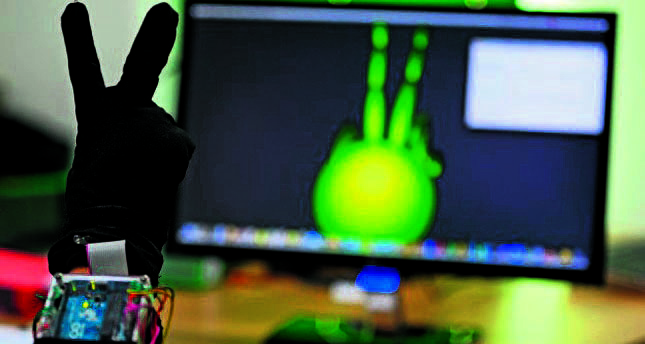 The revolutionary invention of computer engineer Elif Saygi Bavunoglu and her husband, Harun Bavunoglu, a Ph.D student in mathematics and computer science, has been chosen as one of the final projects at New Ideas New Businesses, Turkey's first and largest technology-based entrepreneurship competition. The competition is organized by the Middle East Technical University.

The prototype was created at the couple's tech start-up, Turtela, built at the Izmir Technology Development Zone in the Izmir Institute of Technology, a public research university.

"We have developed a pair of gloves to translate Turkish sign language into vocal language," Elif Saygi Bavunoglu told The Anadolu Agency. "These gloves are equipped with built-in sensors that can detect hand and finger movements, and transfer them to sounds with the help of artificial intelligence algorithms. Therefore, a person with hearing impairment gets the chance to express himself or herself verbally in addition to signing."

The Bavunoglus have applied to TUBITAK, The Scientific and Technological Research Council of Turkey, to get financial assistance for their project, which is titled "Talking Hands".

"The project is currently under evaluation," Elif Saygi Bavunoglu said. "If we can get support, we hope to launch the production process within a month, and initially produce gloves that detect movements. In the next stage, which should take about ten months, we will focus on equipping the gloves with the ability to perceive Turkish sign language and convert it to sounds. The whole process should take 22 months."

At this stage, the prototype can convert 15 signs into sounds. When the project is completed, the gloves will have the capacity to translate all of the nearly 2,000 words in the Turkish sign language dictionary, as well as their local variations, she said. She added that English and other sign languages could also be uploaded.

It will also be possible to learn which signs correspond to which words with the help of a sign language training module on a screen, which will be attached to the wrist with a hook and loop fastener, she said.

"After developing the commercial prototype, we will start investing in production," Bavunoglu said. "Our dream is to have these gloves handed out to impaired people through the Social Security Institution. Otherwise, we will work with several agencies that purchase such equipment and distribute to those in need in order to facilitate their lives. In that case, we will do our best to ensure that the gloves are handed out for free, or at a very low price."

This wearable technology, which converts movement to sound, can be utilized in many industries including defense, entertainment, advertising and cinema, and it could also be used to help establish communication between machines and humans, Bavunoglu said, adding that their priority at the moment is developing products for the handicapped, but they could also produce devices for other sectors down the road.

There are about 198,000 registered hearing impaired people in Turkey, but the actual number is estimated to be more than 500,000. Virtually all of them communicate using sign language.

"At the moment, there are only a few groups worldwide working to develop such technology, but we have not yet heard of a prototype", Bavunoglu said.

"With the help of talking gloves, we aim to eliminate the communication problems people with hearing and speaking impairments encounter every day."
Last Update: Apr 24, 2014 6:24 pm
RELATED TOPICS