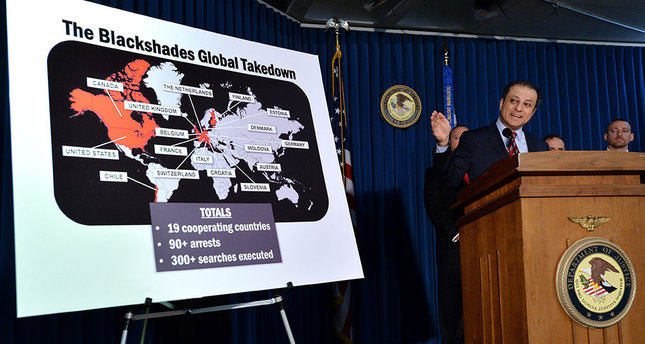 by May 20, 2014 12:00 am
NEW YORK — Police across Europe and North America have arrested nearly 100 people over a global scam that allowed hackers to infect 500,000 computers, steal data and demand ransom money.

An online business known as Blackshades sold thousands of cybercriminals the malware called RAT (Remote Access Tools) for as little as $40, US officials said Monday.

It allowed hackers to access private photographs, passwords, spy on victims through webcams, lock data and then send out "ransom notes" to extort money.

The RAT program could also harass or frighten victims through messages that computers would read aloud, and in some cases it gave hackers access to webcams to spy inside private homes.

US Attorney Preet Bharara told reporters the international operation meant cybercriminals could no longer hide in one country and avoid international justice.

"For just $40 the Blackshades RAT enabled anyone anywhere in the world to instantly become a dangerous cybercriminal able to steal your property and invade your privacy," he said.

Bharara said it was "alarmingly simple." The malware could be bought easily on the Blackshades website and victims tricked into clicking on links.

A "spreader" feature would then widen the infection to additional computers, the US attorney said.
The malware could also be used to bring down websites and send out "ransom notes" to extort cash after telling a user they had lost control of their computer.

"Warning! Your computer has been hacked and your private files encrypted and can only be decrypted by us," reads one such note along with blank spaces for bank account details.

Among the other countries involved in the operation were Belgium, Britain, Canada, Chile, France, Germany, Italy, Moldova, the Netherlands and Switzerland.

Over two days, police and the FBI raided 359 houses, arrested 97 people and seized "substantial quantities" of cash, illegal guns and drugs, as well as more than 1,000 data storage devices.

In the Netherlands, an 18-year-old man infected at least 2,000 computers, controlling victims' webcams to take pictures of women and girls, Eurojust said.

French police last week raided around 50 properties as part of the investigation, detaining 26 people.
Seven of them admitted possessing Blackshades for nefarious purposes, including hacking webcams or Facebook accounts, the public prosecutor said.

New York authorities have charged two alleged creators of the software and two cybercriminals who allegedly used the software to steal and spy on victims.

One of the alleged creators was arrested in Moldova and the US is seeking his extradition, Bharara said.

The other has been cooperating with the government and pleaded guilty in January 2013, the attorney added.

The charges in the United States carry a maximum sentence of 10 years in jail.

US officials Monday advised members of the public to make sure their anti-virus software is up to date and to not open emails or advertisements from strangers.

The operation came as, in a separate case, the United States charged five members of a Chinese military unit for allegedly hacking US companies.

The decision infuriated Beijing, which suspended cooperation on cyber issues.

In the first case me state actors have been prosecuted over cyberespionage, the five have been charged with breaking into computers to steal US trade secrets.