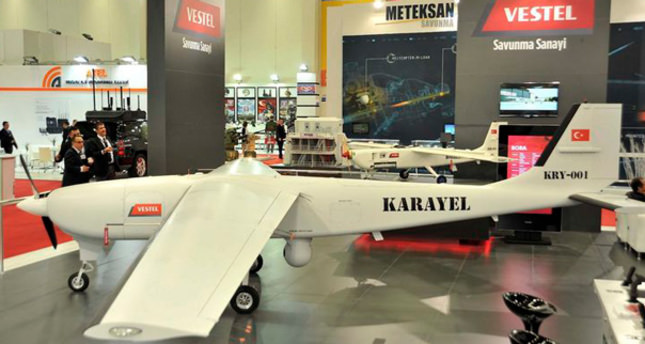 by Daily Sabah Jun 02, 2014 12:00 am
ISTANBUL — Vestel Defense Industry Corporation successfully tested Karayel, an unmanned aerial vehicle (UAV) which was designed for the Turkish Armed Forces (TSK) under an agreement between the Undersecretariat of Defense Industry and Vestel.

According to officials from the company, Karayel is the only Turkish UAV compatible with NATO standards on unmanned vehicles. Once tests are completed, Vestel is set to deliver six Karayels and three ground control systems to the TSK. According to experts, Karayel is regarded as one of the most advanced UAVs currently in use. Karayel is capable of medium altitude long endurance operations of up to 20 hours and at altitudes reaching 6,858 meters.

Another domestically engineered UAV, the Bayraktar, produced by a joint venture between the Kale Group and Baykar Makina, successfully completed its first full automatic flight at the Keşan Military Airport last month. Blazing a trail in the history of the Turkish Republic, the mini UAV's electronics, software and infrastructure were produced by Turkish engineers. The vehicle has a 12-meter wingspan and a 650-kilogram takeoff weight. It was reported to have software and flight systems superior to that of the Israeli Heron UAV.