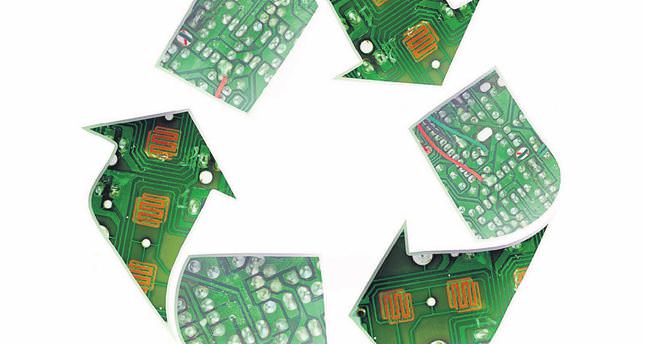 As countries across the world grapple with the massive amount of waste created by the digital age, Turkey is instituting a range of policies to raise awareness about the proper way to dispose of e-waste

Computers, smartphones, washing machines, coffee makers, air conditioners, music players and all of the others … They all have different places in our lives but they have one common issue which happens to be one of the biggest problems humankind is dealing with today, and will continue to do more so in the future. Considering that technology is changing and upgrading exponentially, what will happen to those electronic devices that are no longer being used? They become electronic waste, or "e-waste."

Assessing the statistics will help us understand the significance of the ewaste problem. According to the United Nations Environment Program, in the U.S. over 3 million tons of e-waste is being produced per year. In European countries the approximate overall number is 10 million tons per year. These figures vary depending on the country's development rate. In Turkey, per capita e-waste amount is almost 4 kilograms per year. As reported in the 2012 data of the Ministry of Environment and Urban Planning, Turkey is responsible for only 537,000 tons of e-waste each year. On the other hand worldwide numbers are increasing where each year around 20 million to 50 million tons of electronic devices become e-waste, which increases every year by approximately 5-8 percent.

Even if there were no environmental effects, disregarding ecological aspects such as disposing of e-waste is a crucial problem. Such waste includes highly toxic materials which can affect human life directly. Lead, cadmium, mercury, barium and phosphor are heavy metals often used in electronic devices. The metals that are sorted by name can affect the immune system after long-term contact, and the neural system, blood stream and reproductive system can also collapse. It has further been proved that exposure can have a negative effect on the development of children. Nine monitors have the potential to contaminate 1 million cubic meters of clean water due to highly intense lead and phosphor content. Furthermore, the mercury content of a fluorescent can make 30,000 liters of water unusable, while the chlorofluorocarbon (CFC) content of air conditioners and refrigerators also threatens the perforation of the ozone layer. That is why we need to think about how we can separate, reuse and export this material.

In order to find solutions regarding e-waste, authorities must first try to conserve e-waste as a normal solid waste, exporting it to other countries as a last resort only after recycling has been attempted. The first two solutions haven't helped, especially exporting, which poses the additional problem of where they would be exported to. This issue arises from the substances in the waste and their effect on the environment and human health. The world's biggest e-waste dumping site is in Guiyu, China. In this small town almost everyone works at the dumping site, earning between $1.50 and $2 per day for extricating e-wastes. Owing to the huge amount of e-waste, as stated in committed measurements in Guiyu, air, water and soil pollution caused by the heavy metals is a higher ratio than expected and due to the contamination there is no place for farming.

The European Union made some decisions about waste management, which were initiated in 2003, but were criticized due to the lack of Regulation on Control of Waste Electrical and Electronic Equipment (AEEE), which was revised in 2012 and passed with massive changes. Regulation of ewaste collection and recycling targets are deepening, which are enforced by severe sanctions on unruly member states. According to the regulations, after 2016 the recycling and disposal of all electronic devices which have been sold will be the responsibility of member states. In 2019, member states with e-waste levels of 85 percent will be held responsible. In addition to these objectives, according to the results of the impact assessment to be made, from 2018, the scope of the regulation to cover all electronic waste categories will be expanded. In Turkey, according to the May 22, 2012 Official Gazette, the Regulation provisions of the AEEE were put into force making it compulsory for local governments to collect and suitably dispose of e-waste. The Istanbul Metropolitan municipality has initiated awareness studies regarding electronic waste, especially the Kadıköy government whose officials collect e-waste and eliminate them properly. Within Turkey several special companies have licenses for recycling and disposing of electronic waste, but overall the best and easiest way to deal with the electronic waste is to reduce the amount we waste.
RELATED TOPICS