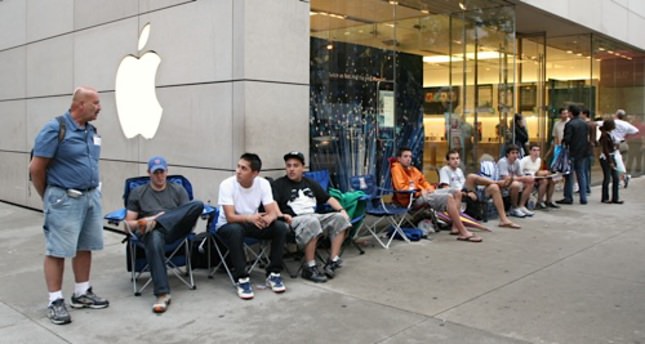 by AA Sep 06, 2014 12:00 am
Some people are already lining up for iPhone 6 at Apple's Fifth Avenue Store in New York. Apple fans started camping outside in front of the flagship store come rain or shine to get their hands on the latest iPhone.

Despite the fact that the actual release date has not yet been announced, company representatives and a handful of people are waiting there day and night. Twenty-five year old Mississippi actress and model Moon Ray sits at the head of the line with her husband Jason Ray. However, the couple is not waiting for the highly-anticipated handset. Speaking to an Anadolu Agency reporter, they are waiting to promote a new iOS app called VideoMedicine which allows patients to have telemedicine sessions via iPhone, iPad and Android smart phones. The couple will continue to stay in front of the store in the upcoming days. They have given interviews to different TV channels, radio and papers across the world. Ray said they are waiting in the queue from Sept. 1 and willing to stay for 17 days to break their record, set last year, 15 days.

Another person is representing an electronics company producing portable iPhone and laptop chargers while waiting at the front of the growing queue. Apple previously stated that CEO Tim Cook will hold a press event to unveil the new product on Sept. 9 at 10:00 a.m. (Pacific Time) at Cupertino's Flint Center, where Steve Jobs introduced Macintosh 30 years before.