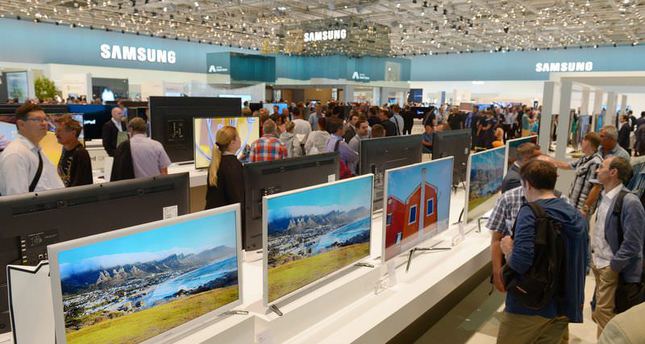 by Sep 14, 2014 12:00 am
Samsung said Sunday it had requested a state investigation of senior executives from its South Korean rival LG for allegedly destroying its products at stores in Berlin, renewing a bitter feud between the electronics giants.

Samsung said it had asked Seoul prosecutors to investigate "a president and other executives of a Korean company" for defamation, property damage and obstruction of business.
LG admitted Sunday that its executives were the target of the accusation.

Samsung complained earlier this month that several washing machines at two major electronics stores in the German capital were found damaged in the same manner.

The incident took place during the high-profile IFA trade fair in Berlin, where major electronics giants including Samsung and LG showcase their latest gadgets and appliances.

"The company in question has tarnished not only Samsung's brand image but also the reputation of Samsung employees by making slanderous claims that our washing machines were defective," it said in a statement.

"We also strongly believe that the truth must be revealed for the sake of fostering fair competition," it said.

LG rejected part of the accusation, saying its executives had made the visit only for market research and had no intention of destroying products on display.

But it also snapped back saying, "washing machines from a certain company appeared to have far weaker door hinges than those from others."

"We hope that this incident is not aimed at tarnishing our reputation as the world's top maker of washing machines," LG said in a statement.

Samsung produces a range of electronic products from refrigerators to TV, leading the global markets for mobile phones and flat-screen TVs.

Its smaller rival LG is one of the world's biggest manufacturers of home appliances including refrigerators and washing machines.
The two have for years locked horns in the home market over a series of bitter PR disputes over supremacy of their own products and technology patent lawsuits.

A high-profile legal battle involving display technology patents even led Seoul's trade minister to arrange a meeting last year between the CEOs of their display units, who later dropped all lawsuits.