Mount Nemrut makes it to the digital world 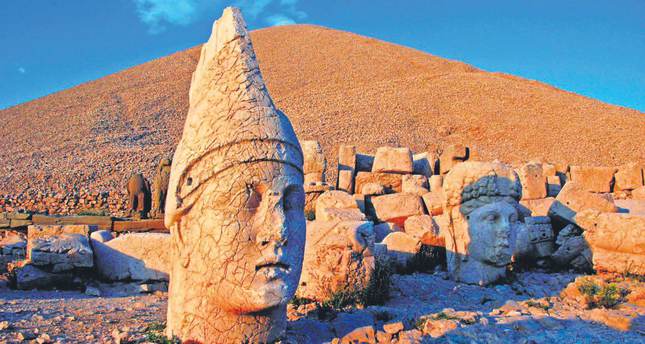 What should be the eighth wonder of the world, Mount Nemrut has made its way into the digital world. Trek around the mountain while identifying the monumental statues

Towering 2,134 meters over the city of Adıyaman in southeastern Turkey, Mount Nemrut has been transformed into a digital engagement platform. Visited by thousands of tourists every year, Adıyaman and Mount Nemrut will be promoted to a whole new level of fun and engaging tourism activity through gaming and social media applications.

After nine months of work, informatics teacher at Adıyaman Fine Arts High School, Mustafa Göksu, and Osman Dolaş of Adıyaman University invented two apps relevant to the region around Mount Nemrut. One of them is an interactive simulation of King Antiochus I of Commagene providing information about the statues, history and ways to trek around Mount Nemrut. The other is a game, "The Kingdom of Commagene: The Lost Treasure," which resembles the popular mobile game, "Subway Surf." Dolaş said the lack of applications promoting Adıyaman was their motivation in developing these games. "I hope people download these games, learn more about Mount Nemrut and visit Adıyaman," he said.
The games can be played on Android cellphones, computers and tablets, and is available on the Google Play Store.

The 2,134-meter high Mount Nemrut, which is notably at one of the highest peaks of the Eastern Taurus mountain range in southeastern Turkey, is assumed to be a royal tomb from the first century. In honor of himself, King Antiochus I built monumental sculptures including a temple tomb and house of the gods in the late Hellenistic period along with two lions, two eagles and various Greek, Armenian and Iranian gods, such as Vahagn-Hercules, Aramazd-Zeus or Oromasdes, Bakht-Tyche and Mihr-Apollo-Mithras. The statues that were once whole have since had the heads detached from the bodies and are now scattered throughout the site. The mountain has retained a great deal of its authenticity due to it being protected under the National Conservation Law No. 2863 and National Parks Law No. 2873. The Mount Nemrut Tumulus was registered as a First Degree Archaeological Site under Act No. 2863 in 1986.
Last Update: Sep 19, 2014 1:59 am
RELATED TOPICS