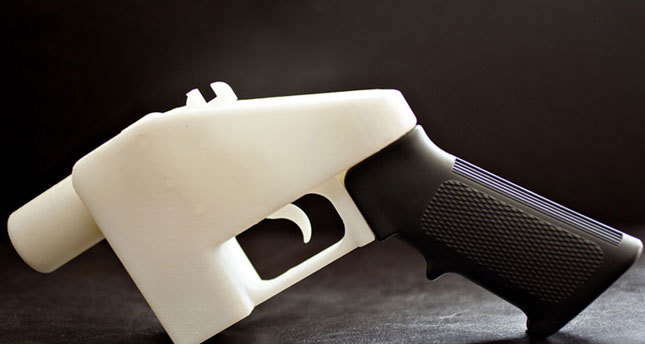 by French Press Agency - AFP
Oct 21, 2014 12:00 am
A Japanese court on Monday jailed a man for two years for making guns with a 3D printer in what is believed to be a first in a nation with strict gun controls. Yoshitomo Imura, 28, was found guilty of making two guns at his home and publishing a video online detailing the process, said the Yokohama District Court. "The criminal responsibility for this act is serious" as it could encourage others to replicate the act, said presiding judge Koji Inaba. Imura, a former employee of the Shonan Institute of Technology, used Internet-based information to build the two functional guns, according to the ruling. He then posted a video online detailing how he built them.

Imura's lawyers argued that he did not know his acts were illegal, a notion that the court rejected. The rapid development of 3D printing technology, which allows relatively cheap machines to construct complex physical objects by building up layers of polymer, has proved a challenge for legislators around the world. Weapons assembled from parts produced by the printers are not detectable with regular security equipment, including scanners found at airports, leading to fears that they could be used in hijackings. The debate about home-made guns took off last year in the United States when a Texas-based group, Defense Distributed, posted blueprints for a fully functional 3D-printed firearm: a single-shot pistol made almost entirely out of hard polymer plastic. In December the U.S. Congress renewed a ban on guns that contain no metal. While Japanese police do carry guns, Japan has very strict firearms control laws and few people possess guns or have ever come into contact with them.