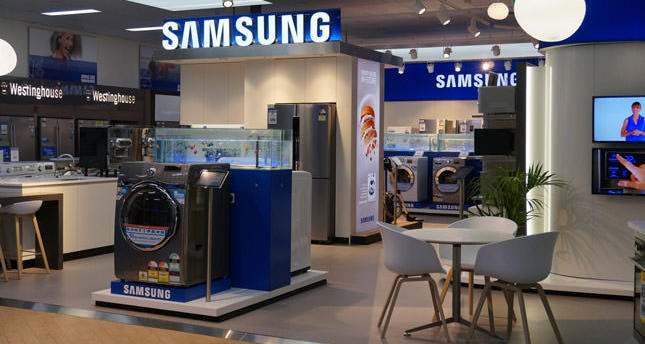 by Associated Press
Jan 09, 2015 12:00 am
Samsung Electronics Co. said yesterday its annual profit fell for the first time in three years as its smartphone growth lost steam. The company's 2014 operating profit is expected to be about 24.9 trillion won ($22.6 billion), down 32 percent from 2013, based on preliminary figures. It will release its full financial results including net profit and a breakdown of business divisions later this month.

For the fourth quarter of last year, Samsung said operating profit was about 5.2 trillion won ($4.7 billion), down 37 percent from a year earlier. The result was still higher than analyst expectations of 4.9 trillion won according to FactSet, a financial data provider, due to robust demand for memory chips.

Analysts said Samsung's smartphone business, which contributed two-thirds of its profit in the last two years, continued to struggle but improvements in its semiconductor division helped the company rebound from the third quarter, its worst quarter in nearly three years. "It's time to see Samsung as a semiconductor company," said Lee Sei-cheol, an analyst at Woori Investment & Securities. Quarterly sales dropped 12 percent to 52 trillion won, in line with the expectations of analysts. Samsung's semiconductor division, which develops memory chips, mobile processors and solid state drives, will generate more profit than Samsung's Galaxy phone sales this year, according to Lee and other analysts.

Samsung's Galaxy smartphones were all the rage in 2012 and 2013, pushing the Korean phone maker past Nokia, Motorola and Apple Inc. in sales volume. But that growth stopped in 2014 partly because of missteps in Samsung's flagship models and it had to heavily discount older phone models to keep them selling. The company was also squeezed in low- and mid-end phone segments by Chinese smartphone makers such as Xiaomi which took over Samsung in China and India. Samsung adopted metal to give a more sophisticated look to its smartphones and introduced a curved side display in the Galaxy Note Edge. The company also said it would reduce the number of models to lower costs.

Despite those efforts, Samsung's smartphone business is unlikely to repeat the growth momentum it had in the past, according to analysts. Growth instead will come from demand for memory chips but that gain will not be enough to stop Samsung's earnings from dropping again this year. To develop new revenue sources other than smartphones and semiconductors, Samsung is pushing hard in the emerging industry known as the Internet of Things with Internet-connected televisions, smart homes and smart cars.

BK Yoon, Samsung president of consumer electronics, said earlier this week that by 2017 all Samsung televisions will be Internet connected. He also said in five years all Samsung hardware products will be ready for the Internet of Things. The company is taking its software, which is designed to challenge Google's Android operating system, to television sets. Samsung said its all-new Internet-connected televisions this year will run on Tizen, its own operating system.