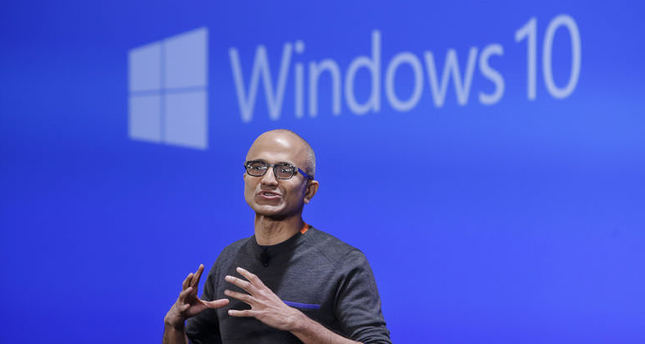 by Anadolu Agency Jan 21, 2015 12:00 am
Microsoft unveiled its Windows 10 operating system on Wednesday in front of a crowd at the company's Redmond, Washington headquarters.

Windows 10 introduces a flock of new features for computers, tablets and smartphones including holograms, a signal Microsoft is attempting to move beyond the realm of screens.

"Today really is a monumental day for Windows," Terry Myerson, the head of Microsoft's operating systems unit, told attendees. "Windows 10 is so much more than the latest version of Windows. Windows 10 changes the rules of the game."

The previous iteration of Microsoft's legendary operating system, Windows 8, saw such a mediocre reception that many users continued to use Windows 7. From the layout to the new features to the marketing - the Windows team noticeably skipped a number in naming the new system - Microsoft demonstrated Wednesday that it had listened to the criticism.

The company is also giving away Windows 10 for free to anyone using Windows 8.1-a flashy strategy considering the amount of money Microsoft, still the world's largest software maker, hauls in from Windows sales.

Microsoft's digital assistant and answer to Siri, Cortana, will be heavily featured in the new OS, as will a replacement for the often maligned Internet Explorer Web browser. The new browser, Spartan, functions more like Mozilla's Firefox or Google's Chrome.

Microsoft is also bringing back the Start menu, a famous feature conspicuously absent from Windows 8. Instead of the three different versions of Windows out now (Windows 8.1 for desktops and laptops, Windows RT for tablets, and Windows Phone), all devices will run on a single version of Windows 10, although there will not be total compatibility among apps and other software.

The most buzzed-about new feature was "Windows Holographic" which allows users to see and interact with three-dimensional holographic images while wearing a special headset known as HoloLens.

Microsoft did not announce a specific release date, but claimed Windows 10 will be available later this year.
Last Update: Jan 22, 2015 9:21 am
RELATED TOPICS