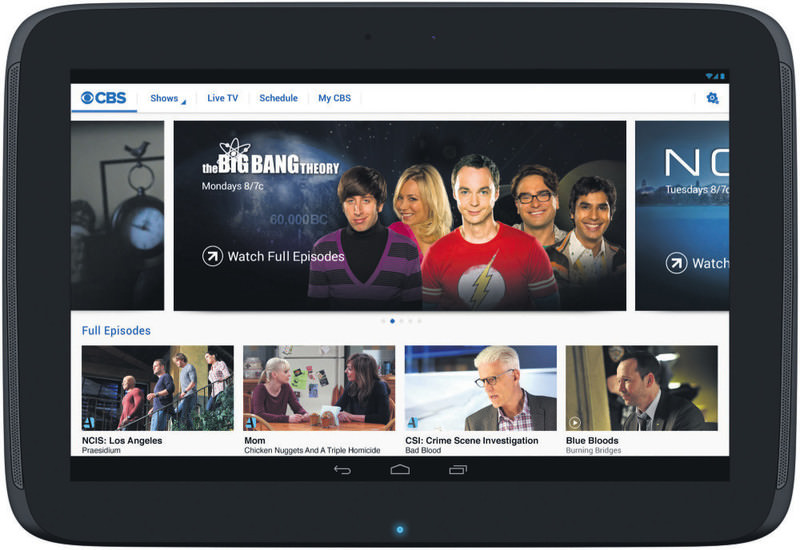 by May 04, 2015 12:00 am
Streaming television is now mainstream, although it has not caused many people to "cut the cord" for traditional pay TV. Not yet, anyway. More than half of Americans now stream movies or television programs using the Internet, according to various surveys.

The vast majority of American households subscribe to cable or satellite services that offer "bundles" of dozens or hundreds of channels in addition to free over-the-air broadcasts. But increasingly consumers are using Internet TV services, both free and paid, viewing on a computer or delivered to a large-screen television display. And the number of streaming options continues to grow: Netflix is the leader with more than 40 million U.S. customers, but viewers can opt for Amazon, Hulu and others on a subscription or a la carte basis.

Live programming - the missing element from most streaming services - is now available from the recently-announced Sony's PlayStation Vue and Dish Network's Sling TV. Sony includes both live and on-demand programming, combining features from cable TV and streaming services, starting at around $50 per month. Sling TV offers live sports through ESPN, news from CNN and Bloomberg, and some on-demand programs, starting at $20 a month. Single channels are also streaming directly to consumers as well, with HBO and CBS leading the way with subscription plans. And Apple is expected to launch a service later this year which features live program channels.

Does streaming spell trouble for the pay TV industry? So far, it's not the case, but change is coming fast. "We are hitting an inflection point and the conditions are right for [streaming] to accelerate if the players can put together the right offering," said Jim Nail, an analyst with Forrester Research. "We're all waiting to see what Apple does," Nail said. "Will they be as innovative and reshape this as they have done with other sectors?"

A study by Leichtman Research Group found that the largest pay TV operators lost only about 0.2 percent of subscribers over the past two years, hardly a threat to an entrenched industry. However, research group president Bruce Leichtman said the impact may be felt in viewing habits. "Where it is impacting the industry is in eyeballs, in time watching TV," Leichtman told AFP. "People's time is not unlimited and the time spent watching Netflix and other services take away from other pay TV." Over time, this trend could cut into revenue for traditional pay TV, he said.

A Deloitte survey found that live television accounted for 45 percent of viewing time for all of those surveyed but much less for young adults. "The notion of consumers sitting in their living rooms to watch television shows at programmed times, especially among younger generations, is quickly giving way to a market of viewers using multiple devices inside and outside the home to consume content when and where they choose to watch," the Deloitte report said.

A Forrester Research report argues that cord-cutting is "a legitimate threat to linear TV," especially for younger consumers. Forrester found 38 percent of 18- to 32-year-olds do not watch enough TV for it to be worth the money, and 36 percent are not willing to pay the going rate. With streaming, viewers are getting new options for how they get TV content. But Dan Rayburn, an analyst who follows streaming media for Frost & Sullivan, said these services are not likely to pose a major threat to big cable firms like Comcast and satellite services like DirecTV.

"Streaming services are giving customers more options but it's not a replacement for cable," Rayburn said. Yet, consumers are unlikely to save money because any service must pay the content owners - sports channels, broadcast networks and independent channels - and pass on those costs to viewers. "None of these services can compete with cable and afford the licensing fees for content," Rayburn said. Some cable services are looking to fight back. Cablevision, a major regional cable operator, recently unveiled a "cord cutter" package aimed at users who watch only streaming content, including a digital antenna that allows customers to watch free over-the-air broadcasts. Verizon, a telecom group that offers TV service similar to cable, unveiled a "custom" service allowing its user to pick and choose groups of channels based on interests, but is facing litigation from some content providers objecting to the breakup of packages. Over time, Forrester's Nail argued, on-demand TV will become overwhelmingly dominant, with live broadcasts reserved for special events like the Super Bowl. "Consumers do not want to be constrained by the tyranny of the linear broadcast schedule," he said. Although it is not clear which players will dominate, Nail said, "The vast majority of viewing in 10 to 20 years will be time-shifted and on-demand."
Last Update: May 04, 2015 1:27 am
RELATED TOPICS