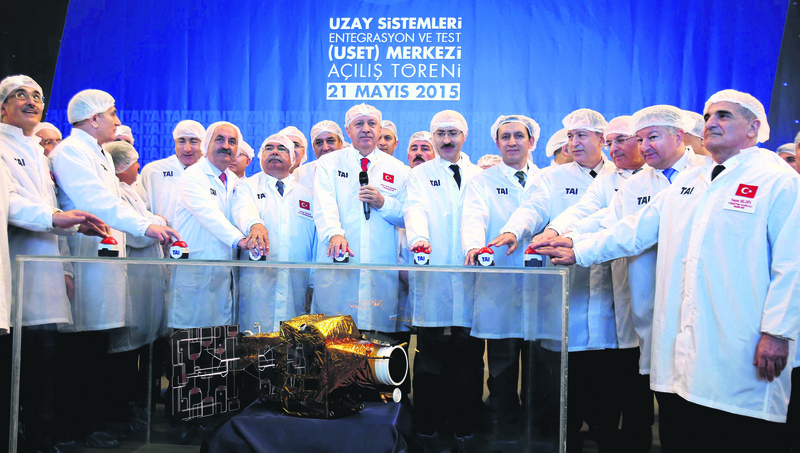 President Erdoğan on Thursday inaugurated the country's first space center, which he described as a significant step toward self-sufficiency in telecommunications and satellite technology while allowing Turkey to participate in international projects

The first Space Systems Integration and Test Center (USET) in Ankara was inaugurated yesterday as part of the Göktürk-1 Satellite Program by Türk Havacılık ve Uzay Sanayii AŞ (TUSAŞ). Speaking at the opening ceremony of the center, President Recep Tayyip Erdoğan said Turkey will now become one of the leading countries in space studies and a national fighter aircraft will hopefully be included in the inventory of the Turkish aviation force in 2030. Erdoğan also said in terms of defense and space industries, Turkey has potential and should become self-sufficient. The Göktürk-1 Satellite, which will become Turkey's first reconnaissance and surveillance satellite with an "under-meter solubility" will be utilized for assembly and construction, advanced integration and for performing the environmental tests of Turkey's first domestic/national satellite, Türksat 6A. The investment costs of the center, of which the foundations were laid on Oct. 29, 2011, have been covered by the Undersecretariat of the Defense Industry and TÜRKSAT AŞ, and the center will be managed by TUSAŞ.

Integration and tests of more than one satellite up to a mass of 5 tons will be performed at the center. Further, all mechanical, heat, acoustic and electromagnetic environments the satellite may be exposed to during the launching will be created and qualification tests at international standards will be performed. The center will also be used for international space projects and after the advanced integration and environmental tests of Göktürk-1 Satellite are completed, the satellite will be delivered to the launching site from TUSAŞ. With direct connection to the military airport, the need to transport the satellite via highways will be eliminated, thus, creating a great advantage in terms of security, safety, costs and risk management.

Transportation, Maritime and Communication Minister Feridun Bilgin said that the construction of Turkey's first national communication satellite, Türksat 6A, will take place at the center under the supervision of various institutions such as The Scientific and Technological Research Council of Turkey (TÜBİTAK), Turkey's state-owned defense company ASELSAN and TAI. "When Türksat 6A is completed, Turkey will become one of the first 10 countries capable of producing its own communication satellite," added Bilgin and will become one of the few international players in the assembly, integration and test services of space systems.

Bilgin further said they have big targets for the aviation and space sector and are planning on creating the national regional airliner, national communication satellite, observation satellites and satellite launching systems as the Undersecretariat of Defense Industry together with universities, industrial institutions and all other related parties in Turkey with Turkish engineers. Bilgin added that this center will be one of the main steps in reaching this aim.

Bilgin also announced that they have reached the final stage in the foundation of the Turkey Space Agency, which will be coordinating all activities in the space industry. He also added that they have determined the lack of qualified labor and are taking steps in order to create such human resources required for space and aviation technologies. Noting that Turkish engineers have attended satellite design and production training and activities in France and Japan and have gained experience and expertise for the production of satellites launched by Türksat, Bilgin said the testing of the Göktürk-2 satellite was carried out in France as Turkey was lacking such a center. "With the foundation of this center, we will not have to send our satellites abroad for testing," added Bilgin.

The satellite tests at the center will take place in a sterile area clear of the external environment in order to detect possible electromagnetic interactions and to confirm that all equipment of the satellite work in electromagnetic consistence with each other.

The vibration tests to be performed by electro-dynamic vibrators will observe the effect of mechanical loads occurring with the activation of the launcher. Further tests of shock loads that occur during phases such as when the fuel tanks are thrown after the launcher is activated and also when the satellite separates from the launcher. Verification of the solar panels to open toward space and that the shock force due to explosive screws do not damage the satellite and the solar panels will be tested by the Solar Panel Opening Test Mechanism. The satellite will be ready for delivery to the launcher only after the environmental and operational tests are successful and such phases are also carried out smoothly without any problems.
Last Update: May 21, 2015 9:23 pm
RELATED TOPICS