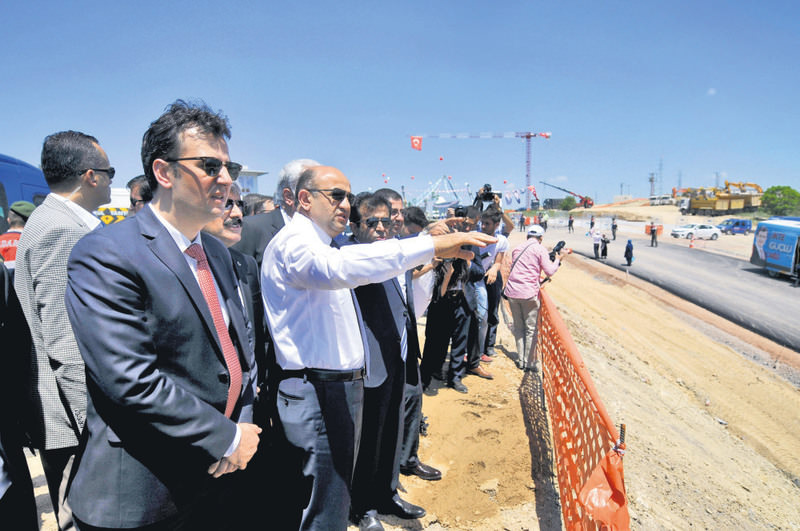 High-tech valley's groundbreaking ceremony was held in Kocaeli's Gebze district with a ceremony attended by Science, Industry and Technology Minister Iu015fu0131k. Iu015fu0131k examined the construction area with his team after the ceremony.
by Daily Sabah with AA May 26, 2015 12:00 am

Turkey's high-tech valley, which has begun being constructed across 740 acres in Kocaeli's Gebze district, will include 5,000 R&D companies and is expecting an annual turnover of $50 billion

The foundation of high-tech valley was laid on Tuesday to become a town with 5,000 research and development (R&D) companies and 100,000 employees, with a ceremony attended by Science, Industry and Technology Minister Fikri Işık.

High-tech valley, which is being established to increase Turkey's competitive power in the field of global innovation and information technologies, is being constructed on 740 acres in Kocaeli's Gebze district. $50 billion in annual turnover is expected from the project. The purpose of the town will be to transform information into technology, and technology will be transformed into production.

High-tech valley will include 309 acres for R&D activities where academics, industrialists, entrepreneurs, ideas, logic and hard work will come together. Not only information firms, but also all R&D firms that want to continue their manufacturing activities based on information technologies, will also take their place in the town along with international innovation and technology transfer centers and prototype (Fab-Lab) and test workshops, creating a strong synergy.

Around 5,000 R&D companies will be located in the town along with recreational and sports areas and education and social facilities with a capacity of 100,000 people, offering a rich social and living environment for both employers and employees alike.

The region, with around 87 out of the 500 biggest industrial organizations in Turkey, 37 organized industry zones, 14 universities and centers of the Scientific and Technological Research Council of Turkey (TÜBİTAK) and Turkish Standards Institution (TSE), are located, will be an attraction center for information technologies.

Further, at only a three-and-a-half hour flight and $25 trillion market volume, the region will reach a population of around 1.5 billion and will be an important logistic location including airports, high-speed train routes, highway connections and transit to the Gulf. Cooperation will be established with national and international universities to turn the town into an education center in addition to hosting the first thematic information center.

Slogan: "Made from Turkey"

Once the project is initiated, Turkey will become one of the most important centers in terms of information technology in the region. "Turkey, which has a crucial location that unites Europe, the Far East, Middle East and Africa, plans to increase its share in technological exports with products 'Made in Turkey' along with the slogan 'Made from Turkey' to offer goods based on its own technology," Işık said. He added that with the initiative it will be possible to turn high-tech valley into a catalyst for innovation, technology-based growth and capital accumulation and development while offering an economic and social development model.
Last Update: May 26, 2015 10:52 pm
RELATED TOPICS