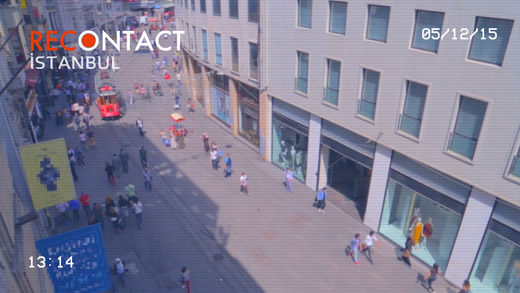 by Anadolu Agency Sep 02, 2015 12:00 am
The app has been featured among the most recommended in the puzzle game category by the Apple Store.

Recontact Istanbul was developed by an all-Turkish cast and has known considerable success in a little over a month.

"One month after the game Recontact Istanbul was released on July 8, it was listed among the most suggested games by App Store editors," says 27-year-old Eray Dinç, who devised the game application.

Recontact Istanbul puts you in the shoes of a security officer who is tasked with finding various suspects - of whom you are given a description - on footage said to be captured by security cameras.

The streets of Istanbul serve as the backdrop for this unique detective mission. The videos use images specially shot for the game. However, faces of individuals are purposely unclear "to avoid legal problems", says Dinç.

Currently a doctoral student in the department of Cinema and TV at Istanbul's Beykent University, Dinç has been fascinated by film for years.

In fact, he has directed quite a few short films, which he has presented at various film festivals, even claiming some awards along the way.

"The most significant prize was a jury's special award at the 21st International Istanbul Short Film Festival [in 2009] for me because I was as old as the festival at the time," he says.

Passionate about detective stories, Dinç was looking for a way to involve audiences within the action.

"I was working on a detective film story about spying and the story turned into a mobile game in my mind."

He then decided to join the Oyunder Game Producers and Developers Association in Istanbul, which was founded in 2012 to teach the various skills needed to develop a video game.

After completing the game design and filming, he sought the help of his friend, Can Aksoy, an application developer, and of Umut Saruhan Özgüler who came up with the game's soundtrack.

"The development phase took approximately five weeks," says Dinç. "The most delightful part of making the game was our friends' reactions because I saw that they were having fun."

But his biggest supporter during the whole process was his older sister Simay Dinç, 29, the producer of all of her brother's films since 2008.

"We grew up with Eray almost as twins and that is an advantage for us because we have been brainstorming all of these ideas together," says Simay, also a media director for Arya Women's Investment Platform, which creates investment opportunities with strategic partnerships for women-led entrepreneurship.

Simay Dinç is especially proud to recount that it was a five-person Turkish team that brought something new to the crowded market of the app world.

"Eray and I needed to do something bold to be preferred between millions of applications in the world," she adds. "This is our first project and we had a shoe-string budget with a small team."

Recontact Istanbul is available in more than 150 countries and is playable in 11 languages.

The game will also be featured on Sept. 4 in a pop-up experimental video exhibition at the Pera Museum in Istanbul.