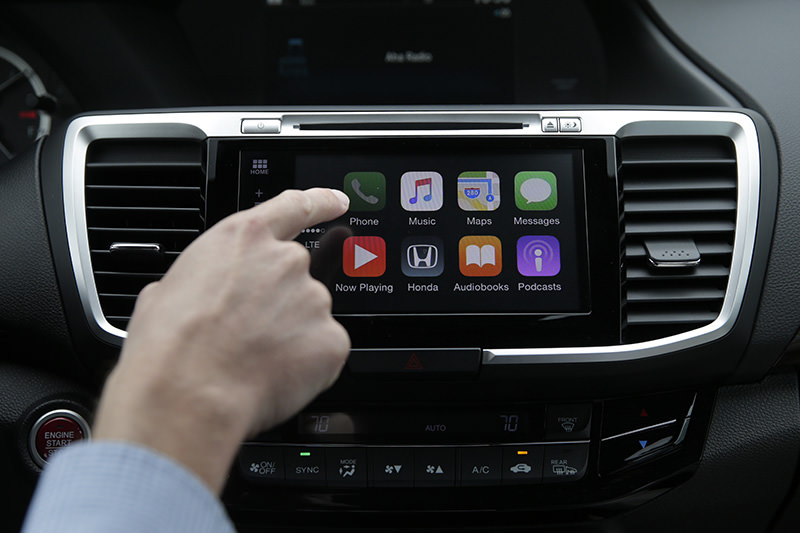 by Associated Press
Sep 04, 2015 12:00 am
Playing deejay with voice commands will get easier for more Americans this fall as some best-selling cars get updated with software that integrates smartphones into the dashboard.

With the 2016 model year, Apple's CarPlay and Google's Android Auto will turn cars as affordable as a base model Chevy Spark into rolling robotic assistants that give directions to nearby restaurants or play the latest hits with commands as simple as "Play Ellie Goulding."

The Associated Press recently tried out both systems on a 2016 Honda Accord. As with phones, voice-activated car technologies don't always work as intended, bringing up inaccurate directions or failing to open an app, for example. But overall the two systems are convenient and incredibly intuitive.

Both CarPlay and Android Auto should give drivers more time to keep their eyes on the road compared with the automakers' own voice systems, which can require multiple steps and looking at on-screen menus. Still, as with any system that requires driver input, there are concerns about distraction.

"Anything that takes your attention away from the task of driving is not something you want to engage in," said Kathy Lane, a spokeswoman for the National Safety Council, a nonprofit organization created by Congress to promote safety.

Neither system has been tested yet by the Insurance Institute for Highway Safety, says spokesman Russ Rader. The institute studies both human and mechanical factors in trying to reduce the number of vehicle crashes.

Consumers increasingly want to use their smartphone while driving without running afoul of the law. For the last few years, drivers of most new cars have been able to speak to their phones and have audio stream through a car's speakers using the nearly ubiquitous Bluetooth wireless standard. However, doing so can require fiddling with the phone, like holding down the home button first.

Both CarPlay and Android Auto allow voice commands to be turned on with a touch of a steering wheel button. Phones need to be plugged into the USB port, where the phone is kept charging and powering the in-car entertainment. You can access maps, voicemail, phone contacts and music apps using a touch screen embedded in the dashboard no need to grab your phone.

One wrinkle is that Apple reserves voice commands for its proprietary apps phone, maps, texts and Apple Music. That means the magical ability for iPhone users to ask the digital voice assistant Siri such complicated tasks as "play the top song from 2011" will only work if you're paying $10 a month for Apple Music. (It's Gotye's "Somebody That I Used to Know," if you were wondering.) However, you can use your voice to play songs you have downloaded and own on your iPhone.

The less restrictive Android Auto will allow you to use apps like Spotify as long as you specifically tell it to "play Aerosmith on Spotify," or set Spotify as the default music app. A Spotify subscription also costs $10 a month.

The systems themselves can cost users a lot more.

The 2016 Honda Accord EX with manual transmission is the lowest trim on which Honda is offering CarPlay and Android Auto support. At $25,480, the EX is $1,315 pricier than the Sport trim, and includes things like a moon roof, keyless remote and a better touch-screen display. Volkswagen's entry level 2016 Jetta 1.4T at $17,680 offers CarPlay and Android Auto as part of a $995 technology upgrade that includes a larger touch screen and rearview camera.

Some automakers believe that such features could motivate buyers to move up the trim level, rather than to more expensive models. "It's going to provide a good benefit to the Accord shopper," says Jay Guzowski, manager of product planning for mid-size cars at American Honda Motor Co.

General Motors stands alone in offering CarPlay and Android Auto as standard equipment on cars as inexpensive as the Spark the 2015 version retails for upward of $12,170 and as high-volume as its Chevrolet Cruze and Malibu sedans and Silverado trucks. Chevrolet marketing director Steve Majoros calls the decision "revolutionary," and one the automaker hopes will improve its market share.

"CarPlay and Android Auto are about to really hit the mainstream," says Kelly Blue Book senior analyst Karl Brauer. "We're talking about some 40 to 50 models that'll have it in probably the next 12 months or less, which is maybe about 20 percent of the entire car market."

IHS analyst Colin Bird predicts that automakers in the U.S. and Canada will sell a modest 497,000 cars with CarPlay, Android Auto or both this year. The number should jump to 5 million in 2018 and nearly 10 million in 2020.

As smart and helpful as the CarPlay and Android Auto are, they aren't perfect.

On a quick demo of a fully-loaded, coffee-colored 2016 Accord Touring, the Android Auto voice assistant helped me play songs from artists like Adele, Sting and Ellie Goulding but would not recognize "U2" as anything other than "YouTube." It also failed to open the iHeart Radio app despite being told to (a later check showed the app hadn't been set up to recognize its location, which may have thrown a wrench into things).

CarPlay users won't be able to use the superior Google Maps through the interface, even if the app is on their phone. In the demo, Apple's notoriously quirky maps app directed me to drive to Honda's American headquarters in Torrance through the research and development back way, bypassing the front driveway and visitor parking lot even though it was a more direct route.

There's still work to be done on making the integration better.

One problem is that when phones must be plugged in rather than left in a pocket or purse usage of Internet-connected apps goes way down, says Pandora's vice president of automotive business development, Geoff Snyder. "When it's required for use of the system, utilization falls off pretty dramatically." So for now, certain automaker-made infotainment systems with apps will be more convenient for people who just want to get in their cars and go.

Apple software engineering executive Craig Federighi said in June that the iOS 9 mobile operating system update coming this fall will make CarPlay work without taking out your iPhone. But according to Apple, that may require another hardware update from automakers: support for Wi-Fi.
Last Update: Sep 04, 2015 8:45 am