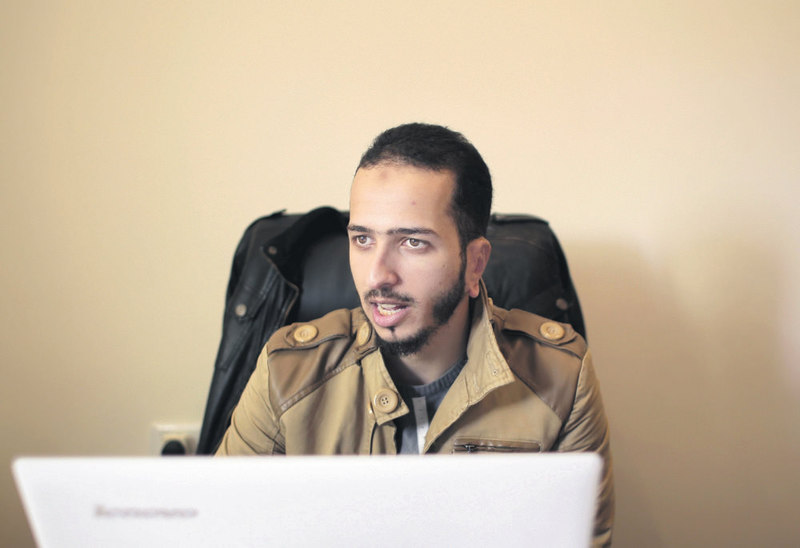 by Associated Press Dec 09, 2015 12:00 am
As a student graduating from computer college two years ago, Mohammed Qudih was dreading the "painful" unemployment in the Gaza Strip a war-battered territory where nearly half the population is without work. Today, the 25-year-old engineer boasts about his company, its 20 full-time staff and the final check he is issuing to cover the $40,000 spent on designing and furnishing the office. The firm, called Haweya for Information Technology, specializes in branding for new or restructuring businesses. Its name in Arabic means "identity." "I was shocked by the painful work situation in Gaza; there were no jobs and getting a job is very, very difficult. That's where the idea came from," Qudih said, sitting behind a white laptop on his dark wooden desk.

It is a rare success story in Gaza, whose economy has been battered by an Israeli and Egyptian blockade and a 50-day war between Israel and the territory's Hamas rulers last year. Qudih said the idea for his startup had been in his mind since he entered university in 2009. Five years later, Haweya saw light after receiving support from the Mobaderoon project. The program, which means "entrepreneurs" in Arabic, is administered by the Palestinian Welfare Association, a development agency, with funding from the Kuwait-based Arab Fund for Economic and Social Development.

In all, there are now four business incubators and accelerators in Gaza, offering advice and financial assistance to aspiring high-tech entrepreneurs. One is run by the U.S. charity Mercy Corps. "We can say it's a trend," said Yousef Elhallaq of Mobaderoon. "It has been an actual phenomenon in Gaza and the interest in it, in part, is driven by unemployment."

Haweya is one of dozens of startups that have survived despite the conflicts, the blockade and Gaza's run-down infrastructure. At best, they get eight hours of electricity on any given day. The Israeli-Egyptian blockade restricts the movement of people in and out of Gaza, and the territory is still recovering from the damage of last year's war. The closure has been a driving force for the entrepreneurs, who are forced to innovate in order to confront the unique challenges they face. Gaza startups are currently developing cheaper, local alternatives to expensive products like 3-D printers and stabilizers for video cameras.

In May, the World Bank put the unemployment rate in Gaza at 43 percent and warned the economy is on the "verge of collapse" due to the war, blockade and poor governance. The Mobaderoon program has created about 100 jobs so far, a small number in a territory of 1.8 million people. Still, it is a notable achievement, especially in light of the public sector turmoil.

In November, young entrepreneurs gathered at a hall co-managed by the Islamic University's Business and Technology Incubator, auditioning to be among 20 startups accepted into the third round of the Mobaderoon program. Each successful startup is entitled to about $10,000 in cash, machines, consultation and support, according to Elhallaq, their supervisor. In one of the few projects that don't employ information technology and communication, Dalia Abu Tahoun and her colleagues offered visitors white cheese cubes on toothpicks. Their idea was to naturally fortify soft cheese with calcium and phytoestrogens to make the nutrients cheaply and easily available for women and children suffering from fragile bones.

On another desk, Ahmed al-Shuraffa, 22, showed off a project that allows smartphone users to take a 3-D tour of Jerusalem's Al-Aqsa Mosque compound. The mosque, Islam's third holiest site, is a key Palestinian religious and national symbol. Al-Shuraffa, like most Gazans his age, has never been to Jerusalem and he counts this as one of the main difficulties for his project. He relies on images and data provided by friends. "Working in an environment and trying to recall it virtually in a place you have never visited, or which is difficult to imagine, is a big problem," he said.

Haweya offers event management as well as web, architecture and interior designs to local and international clients, many of them in the Arab Gulf. They remotely designed the logo and stage setup for the third International Forum for Humanitarian Action, which was held in Qatar in May. The closure prevents them from signing more deals, and Qudih prays for the opening of the crossings to boost business. However, he is satisfied with what he has done so far. "It's a beautiful feeling to reach a result, where the idea has become a reality and the dream has come true in Gaza's difficult circumstances," he said.
RELATED TOPICS