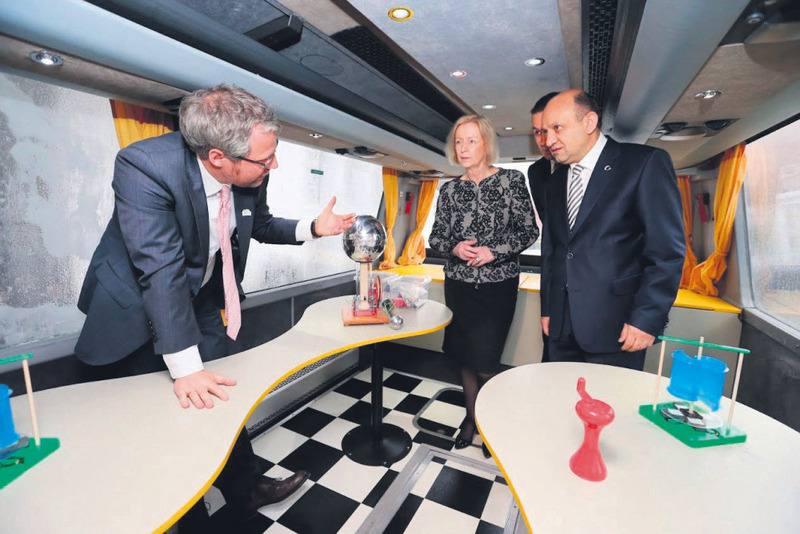 Science, Industry and Technology Minister Fikri Işık underlined the production of more valuable goods requires fruitful research and development that aims to save Turkey from the median income trap

Minister of Science, Industry and Technology Fikri Işık said the ministry will present a research and development (R&D) reform package to the Economic Coordination Board on Monday, adding, "We have revised all R&D practices that have been carried out so far. This is one of the packages that we want to address foremost in Parliament after the 2016 budget is announced."

Underlining the importance of structural reforms, Işık said the economy is one of the most important priorities of the government. Stressing that qualified production is not possible without innovative R&D, Işık stated that the government increased the number of techno-parks from two to 63in 2002, adding 35,000 qualified staff members to more than 3,000 companies within these techno-parks. "In parallel with these studies, we will rapidly actualize the Bilişim Vadisi (Informatics Valley)," the minister said, adding that, upon completion of the first phase of construction for the valley and the İzmit Bay Bridge in 2016, significant contributions will have been made to Turkey's R&D sector and innovation system.

According to Işık, the number of R&D centers has surged by 50 percent and reached 227 in the past year-and-a-half. He said that, even though Turkey has no problems with allocating funds to R&D-related projects, it does face problems regarding project quality, and has invited the Chamber of Industry and Commerce to establish a project unit.

He pointed out that the ministry will present an R&D reform package to the Economic Coordination Board on Monday,

Işık also stated that the ministry wants to actualize projects which will make cooperation between universities and industries more efficient, under the contingence that the state will not levy taxes on the revenue obtained by researchers as a result of R&D studies, in accordance with a new regulation to be passed soon. The new regulation will also limit the cuts imposed on such revenue to 15 percent.

Işık also said that a production reform package is being prepared to restructure organized industrial zones and new regulations will be introduced to eradicate the problems being faced by organized industrial zones. The minister further noted that they wanted to restructure the Scientific and Technological Research Council of Turkey (TÜBİTAK) with the objective of fostering council support of the private R&D centers, rather than making it a rival to them. "We cannot carry out R&D activities with the logic of the state," he added.

Underlining that TÜBİTAK will focus on basic and qualified R&D studies, Işık said the 13-year Justice and Development Party (AK Party) rule has encouraged industrialists to be engaged in R&D activities.

Speaking at the 9th Court Meeting which was organized by the Anatolian Businessmen's Association (ASKON) under the theme of "qualified production" in Ankara, Işık said that countries are evaluated based on different economic criteria. Turkey could move to the upper-middle income group in 50 years, while South Korea completed this process in 17 years, he noted.

He also said the per capita income in 2015 might drop below $10,000, which is lower than that of 2014, due to the change in the dollar-to-euro parity and the dollar's appreciation against all other currencies in the world.

Işık emphasized that Turkey must make great endeavors to achieve its objectives for 2023 and achieve high growth rates in the next four years of the AK Party rule, adding, "Turkey can no longer grow by gaining from demand and making use of a cheap labor force. Turkey must focus on goods with high added value and enhancing its production quality. Also, it must make innovative understanding the basis of production."

Stressing that it is of great importance to invest in future technologies, Işık stated that Turkey must prepare its industry to this end. Touching on the domestic car, the minister said that it will be a Turkish brand and all discoveries and intellectual property rights will belong to Turkey. Additionally, Turkey aims to produce more than 85 percent of all car parts for the domestic car in Turkey - an important step towards establishing Turkey's presence in the technologies of the future.In reference to the fact that there is a major paradigmatic shift in automobile production, Işık said if Turkey cannot produce a domestic automobile brand, it cannot escape being a sub-supplier in the automotive sector. However, the minister added, if it can produce one or more domestic brands and implement new technologies, the Turkish automotive industry will be confident about the future and will be a strategic sector of the Turkish economy. "In this regard, we consider the domestic car to be a technology development platform," he said.

Işık noted that the automotive industry is advancing towards the production of electric cars, the most important part of which is the battery. According to Işık, TÜBİTAK has the technology necessary to develop batteries and Turkey can be a producer and exporter of batteries if the country seizes the opportunity. Considering that batteries are used in a many different sectors, the production and export of batteries will be an important source of income for the country, he added.

Underlining that the most important part of qualified production is a qualified human resource, Işık emphasized that an understanding of education will be actualized step- by-step to build a qualified staff.
Last Update: Dec 21, 2015 1:37 pm
RELATED TOPICS