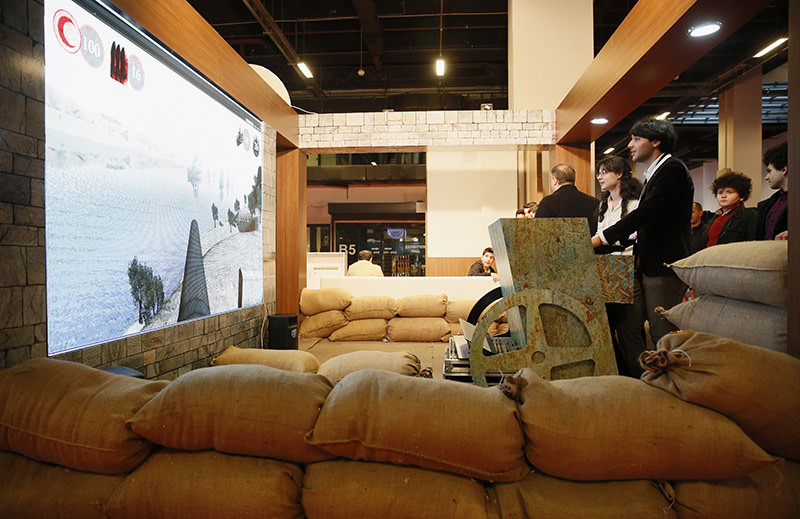 by Anadolu Agency Feb 20, 2016 12:00 am
The world of computer games has steadily grown from the preserve of teenage bedrooms to become a powerful and profitable business sector, and Turkey is home to a multi-million-dollar piece of that industry.

Total revenue of Turkey's digital game industry hit $464 million in 2015, forming part of a $91 billion worth industry worldwide, according to a report published by Turkish Game Developers' Association.

The popularity of gaming in Turkey can be partly explained by the high number of Internet users, which is roughly 41.3 million out of a population of 78 million. Over 54 percent of these online Turks play games.

The Turkish Game Developers Association data show that the country's game industry needs to be improved to take advantage of the domestic market's potential. "There is serious consumption in Turkey. People love to play games", one expert tells Anadolu Agency.

Güven Çatak, a professor of computer architecture at Istanbul-based Bahçeşehir University and also the founder and director of the university's Game Design Graduate Program, said: "The reason why the Turkish sector's output is not enough is that there is no strong 'production line' in the game industry."

Professor Çatak stated that although the Turkish game industry accelerated in the last five years; it is an "interdisciplinary zone" which requires art, design and technology, and musical skills. "Creating a game only is not enough; it must be marketed," he said.

Today's products appeal to the visual and auditory senses; even the characters' costumes in the game can be commercialized. Therefore, programmers, designers, scenarists, musicians, marketers must work together if a game is to succeed.

Prof. Çatak said this production-line approach should to be stretched to improve Turkey's position, adding that the "first phase of the production line is academic education."

There are several academic programs about game creation, in Ankara and Istanbul based universities, mostly post-graduate degrees, which aim to provide for the needs of the Turkish game industry.

Alongside higher study, secondary-school education is important to improve the gaming sector because intermediate staff have a crucial role in the industry, Çatak said. Turkey can take Germany as an example, which has two-year vocational high schools to train the people the sector needs in its 'production line'.

According to Newzoo, a leading research company in the game market, Turkey ranks sixteenth in a list of total national game revenue with $464.3 million with a 78.6 million population. However, Germany was fifth with games revenue of $3.6 billion for its 80 million people and the U.K. was in sixth place with $3.5 billion and a 64.7 million-strong population.

Çatak gave Canada as an example. The North American country changed policies nearly 10 years ago to provide tax allowances to game developers. This prompted many Europe-based game creators to shift to Canada to lower costs. Consequently, Canada's game industry revenue has risen to $1.8 billion despite only having a 35.9 million population.

In Turkey, game studios, developers, software companies and designers have established two associations in Ankara and Istanbul. "They have become a communication tool between the sector and the government and they are trying to fit the regulations to the industry," Çatak said.

These associations play a significant role in the global market as they organize exhibitions, conferences and open-space meetings. They represent the Turkish gaming industry in the international arena by participating in events abroad.

Çatak said that Turkey would be a partner country of the Game Developers' Conference that will be held in Germany in August 2016, which is the largest gaming industry event in Europe.

Turkey had held only one comprehensive game exhibition before 2016: 'Gamex' organized by the Oyunder Association.

The organizer of the Istanbul expo, GL Exhibitions Turkey's CEO Mustafa Gürbüz, told Anadolu Agency that Turkey would be a country that links Asia and Africa and Europe in the digital marketplace. He added that Turkey had potential to be a hub in the digital game industry with 22.5 million gamers and an annual growth rate of 7.8 percent.

Gürbüz said the expo would be repeated next year "with b2b meetings to develop cooperation among game firms".

These fairs, which are repeated every year, could raise the prospects for the potential game market in Turkey.

"Turkey is the biggest digital game marketplace in Europe with more than 77 million people, 40 percent of whom have an Internet connection at home," said Bartosz Skwarczek.

Skwarczek said that Turkey had the potential in digital game market in terms of the number of players: "There are 22.5 million gamers in Turkey. I believe this can be much more."

"Twenty-five percent of Turkish players are under the age of 25. It means that every year new players come and play."

However, while Turkey stood at sixteenth position in the total revenue list of the world's game industry in 2015, China was first with $22.2 billion and the U.S. followed on $21.9 billion. A reason why the Turkish digital game market is not very profitable, despite a huge number of gamers, is that the money spent per gamer is very low.

"The purchase investment per customer is $30 in Turkey, compared to Poland, for instance, where it is about $60, $120 in Taiwan [and] higher in the U.S. and Japan," Skwarczek said.

The worldwide digital game industry's total revenue last year was $91 billion, which overtook the music and filming sectors combined, according to a recent report published by the Ankara-based Digital Game Developers' Association. That digital game sector is now punching at the same weight as some heavy and conventional industries.

However, the total income of Supercell, a Finland-based video game company that owns just three mobile games [Hay Day, Clash of Clans and Boom Beach] was $1.5 billion last year. Despite this, Supercell has only 180 employees.

Turkey has some outstanding game companies; one of those is Peak Games, which produces global-scale mobile offerings; it is very successful in its business and marketing phases, Prof. Çatak said. It has released 18 products up to now and had 30 million monthly active users last year.

Another popular Turkish company is TaleWorlds, creator of the Mount & Blade series that feature medieval role-playing games. Released in 2007, the series has been a "huge success story," Prof. Çatak said. "It is a company that has been created from nothing and now sold millions having achieved significant turnover," Çatak added.

TaleWorlds announced in July 2015 that the game series has sold six million units worldwide; this is the highest number for a Turkish-made games.

So the market is there, the potential is there. As the games industry continues to overtake Hollywood the only question is this: what next for Turkish designers and gamers?
Last Update: Feb 20, 2016 1:06 pm
RELATED TOPICS