Apple's fight with US could speed development of gov't-proof devices 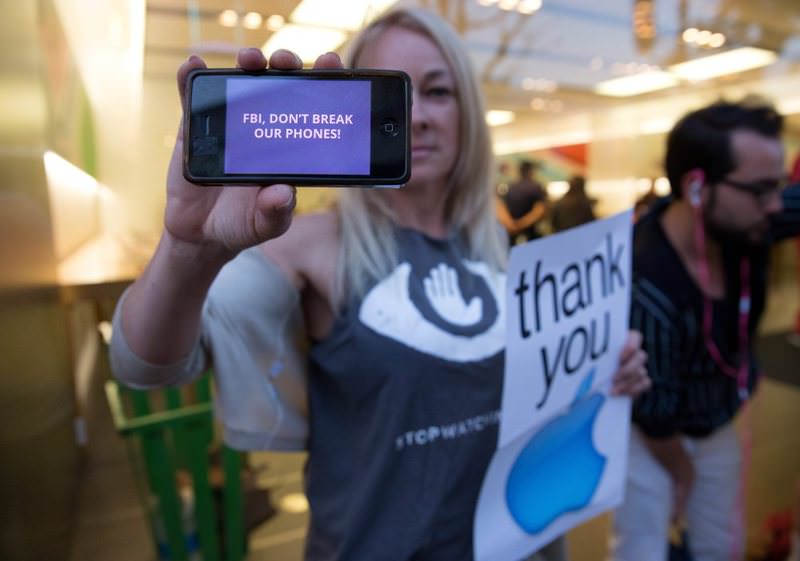 A demonstrator shows a cellphone with a banner in front of an Apple Store in San Francisco.
by Daily Sabah with Wires Feb 25, 2016 12:00 am

Apple will tell a federal judge this week in legal papers that its fight with the FBI over iPhone encryption should be decided by Congress, not by courts, The Associated Press has learned. Already, an emerging industry is marketing super-secure phones and mobile applications, according to Reuters. An Apple executive said the company will strengthen its encryption if it wins its court battle with the federal government, which last week secured a court order requiring Apple engineers to help extract data from a phone associated with the mass shootings in San Bernardino. The executive spoke on condition of anonymity.

If Apple loses the court case, the legal precedent could give the U.S. government broad authority to order companies to assist in breaking into encrypted products. But even a government victory could have unintended consequences for law enforcement, potentially prompting a wave of investment by U.S. tech companies in security systems that even their own engineers can't access, said Jonathan Zittrain, co-founder of Harvard University's Berkman Center for Internet & Society.

"A success for the government in this case may further spur Apple and others to develop devices that the makers aren't privileged to crack," he said. The fast-growing online storage provider Box has already made it a priority to give customers sole custody of data, said

Joel De la Garza, chief information security officer at the company. The intent is to make it impossible for the company to access its customers' data - even under a government order, he said.

"Our goal is to achieve a `zero-knowledge' state" for the company, he said, "where our customers have total control over their data."

It's unclear whether Apple can - or would even want to - make smartphones the company can't access. Two Apple employees familiar with the company's security strategy said the company had no such plans.

One immediate beneficiary of the government's case against Apple is the niche industry, based mostly overseas, that has sprung up to design apps and phones to thwart snooping by governments, business rivals and criminals. In the more than two years since former U.S. intelligence contractor Edward Snowden revealed widespread spying via U.S. companies, a handful of companies have released secure phones with names such as BlackPhone, RedPhone or Priv that trumpet security as a prime selling point.

Phone is due in April. Many more apps, such as Signal and Wickr, encrypt calls or texts messages. Those businesses could surge if the Apple fight drags on.

"That's going to happen," said Chris Wysopal, cofounder and chief technology officer of software security company Veracode. "People will go out of the country, and there will be a market."

Meanwhile, Apple will also argue that the Obama administration's request to help it hack into an iPhone in a terrorism case is improper under an 18th century law, the 1789 All Writs Act, which has been used to compel companies to provide assistance to law enforcement in investigations. A lead attorney for Apple, Theodore J. Boutrous Jr., previewed for the AP some of the company's upcoming arguments in the case. Apple's chief executive, Tim Cook, has also hinted at the company's courtroom strategy. Apple's effort would move the contentious policy debate between digital privacy rights and national security interests to Congress, where Apple one of the world's most respected technology companies wields considerably more influence. Apple spent nearly $5 million lobbying Congress last year, mostly on tax and copyright issues. Key lawmakers have been openly divided about whether the government's demands in the case go too far.

While clarifying he doesn't support untrammeled government access to personal data, the Microsoft co-founder Bill Gates' position runs contrary to those of many tech executives who have backed Apple. The heads of Facebook, Twitter and Google have all sided with Apple on the grounds that complying with the government's request would ultimately undermine data privacy. Gates stated in a handful of interviews that it's not uncommon for phone companies and banks to hand over customer information to investigators. He questioned why tech companies should be treated differently.
RELATED TOPICS