Scandal-hit Toshiba Corp to slash 34,000 employees in Japan and overseas 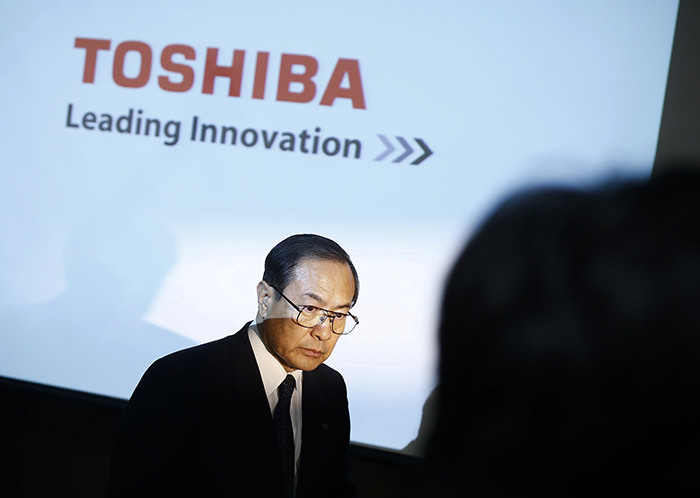 Electronics maker Toshiba said Friday it would slash a total of 34,000 employees in Japan and overseas by the end of the next financial year to restructure its business in the wake of a major accounting scandal.

The Japanese company plans to reduce its group workforce to 183,000 by March 2017, compared with 217,000 a year ago, by selling some businesses and undertaking structural reform, it said.

Toshiba said Thursday it had sold its medical unit to Japanese camera maker Canon for 665.5 billion yen (5.9 billion dollars), while it separately reached an agreement with Chinese appliance producer Midea to sell its white goods business.

Company president Masashi Muromachi conceded it would be hard to win back public trust after the scandal but said, "We will become a company that can continuously grow."

The company plans to invest a total of 860 billion yen into its memory chip business as one of its growth areas in the three years through fiscal 2018, it said.

Toshiba has suffered a setback in its nuclear business since the 2011 triple meltdown at the Fukushima Daiichi nuclear plant in north-eastern Japan. The company said Friday it aims to sell 45 nuclear reactors to countries including India and Britain by 2030.

Meanwhile, Toshiba said it was cooperating with a U.S. probe into its accounting practices.

"Certain Toshiba U.S. subsidiaries received information requests from the DOJ (Department of Justice) and the SEC (Securities and Exchange Commission) in respect of Toshiba's accounting practices, and they are cooperating with the investigation," the company said in a statement.

Tokyo-based firm is embroiled in a scandal over disclosures that company officials doctored accounting books for years after setting unrealistic earnings targets. The company's nuclear energy unit faces trouble over meltdowns in March 2011 at a plant in Fukushima, northeastern Japan, following a massive earthquake and tsunami.

The Justice Department and SEC have not disclosed details of their investigation. Japanese media reported that the questions could be over accounting at Toshiba subsidiary Westinghouse Electric Co. However, Westinghouse issued a vehement statement on its website refuting that the company was under investigation.

"According to the independent report cited in the article, no accounting irregularities have been found in Westinghouse's accounting. To our knowledge, Westinghouse financial reporting is not under investigation," it cited company president and CEO Danny Roderick as saying.

Like many Japanese electronics companies, Toshiba has been struggling to compete against its Chinese and South Korean rivals.