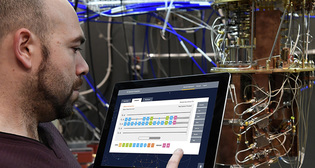 IBM has made its first quantum computer available as a cloud service on Wednesday.

The New York-based quantum computer is more aimed for the use of scientists or students but IBM welcomes anyone who is interested to experiment with the new platform.

While ordinary computers work with transistors (switches) that generate zeros and ones, quantum computers use quantum bits (qubits), which can exist in superpositions - one, zero and both zero and one at the same time.

Qubits are more versatile than typical bits as they don't need to be either on or off, and allow for faster processing speeds and calculations of more specific and complex algorithms.

Current speeds of quantum computers are not ideal for daily real world usage, as quantum computing is still at its infancy, but researchers predict that quantum computers will be able to solve problems that are impossible to solve even with today's supercomputers. Google and NASA are researching how the technology can be used more effectively in real-world situations.

IBM's room sized quantum computer runs with a five-qubit processor, a speed that would not be able to surpass today's personal computers.

The quantum computer requires extreme low temperatures to operate, in some cases even lower than the temperature of outer space (-270°C).

Those who want to experiment with the quantum computer can request an invitation on http://www.research.ibm.com/quantum.

IBM's cloud quantum computer is not the first of its kind, in 2014 Google made the Quantum Computing Playground.