Apple revamps App Store, may not win over developers 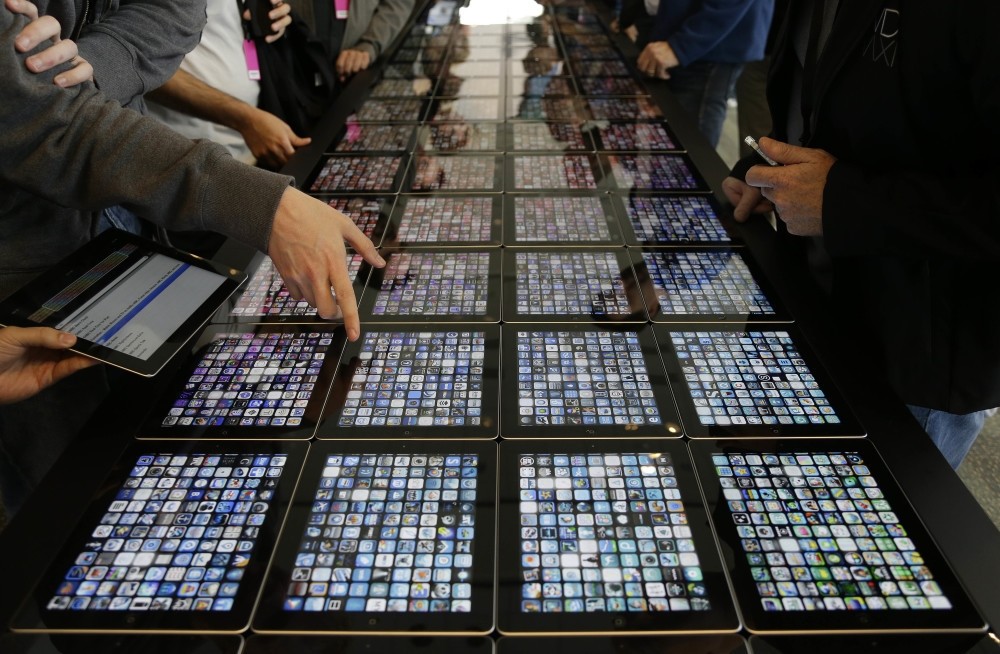 Developers look over new apps displayed on iPads at the Apple Worldwide Developers Conference in San Francisco.
by Jun 10, 2016 12:00 am

Tech giant will encourage appmakers to sell more apps on a subscription basis by promising them a bigger cut of revenue. However, the new features may not ease concerns of developers

Apple Inc announced a series of long-awaited enhancements to its App Store on Wednesday, but the new features may not ease concerns of developers and analysts who say that the App Store model - and the very idea of the single-purpose app - has seen its best days. The revamped App Store will let developers advertise their wares in search results and give developers a bigger cut of revenues on subscription apps, while Apple said it has already dramatically sped up its app-approval process. The goal is to sustain the virtuous cycle at the heart of the hugely lucrative iPhone business. Software developers make apps for the iPhone because its customers are willing to pay, and those customers, in turn, pay a premium for the device because it has the best apps. The store is now more strategically important than ever for Apple as sales of the iPhone begin to level off and the company looks to software and services to fill the gap. Apple CEO Tim Cook said on a recent conference call that App Store revenues were up 35 percent over last year. But the store is also a victim of its own success. Eight years after its launch, it is packed with more than 1.9 million apps, according to analytics firm App Annie, making it almost impossible for developers to find an audience - and increasingly difficult for customers to find what they need, as some 14,000 new apps arrive in the store each week.

"The app space has grown out of control," said Vint Cerf, one of the inventors of the internet and now a vice president at Alphabet Inc's Google, who was speaking at a San Francisco conference on the future of the web on Wednesday. "We need to move away from having an individual app for every individual thing you want to do." Some users are moving away from apps toward messaging services such as Slack and Facebook Inc's Messenger, which are branching out into areas like shopping and document storage. Meanwhile, rapid advances in artificial intelligence (AI) could lead to a world where people navigate their phones through voice-controlled digital assistants such as Apple's Siri, rather than opening individual apps. To be sure, chat and AI are in their infancy, and their appeal to the masses remains uncertain. But if they take off, they could erase the edge Apple enjoys by virtue of its strong app ecosystem and tip the scales toward Google, which is widely considered to have the lead in AI.

"The current dynamic is very favorable to Apple, and this is a suggestion that we might shift to a different dynamic where Google would have a very strong advantage," said Benedict Evans, a partner at the venture capital firm Andreessen Horowitz.

"No matter what you do to an app store, you always have that underlying problem: It's a list of a million things," he added.

Apple may yet find ways to wield AI to reinforce the App Store. The company has already woven more intelligence into its operating system, which now prompts iPhone users to open certain apps during the day based on their habits.

On a more basic level, the changes announced this week address some of the loudest complaints from developers, who say it is virtually impossible to stand out in an app landscape dominated by hit games, big media companies and internet giants such as Facebook and Google. Statistics from Sensor Tower, an app analytics firm, show a stark and widening divide between top earners and low performers in the App Store. The top 1 percent of app publishers raked in about 94 percent of the store's estimated $1.43 billion net revenue in the first quarter of 2016. The gulf has expanded rapidly since July 2012, the first month for which Sensor Tower has data, when the top 1 percent netted about 80 percent of the revenue in the store, according to data provided to Reuters. The figures cover paid apps and apps that include in-app purchases.