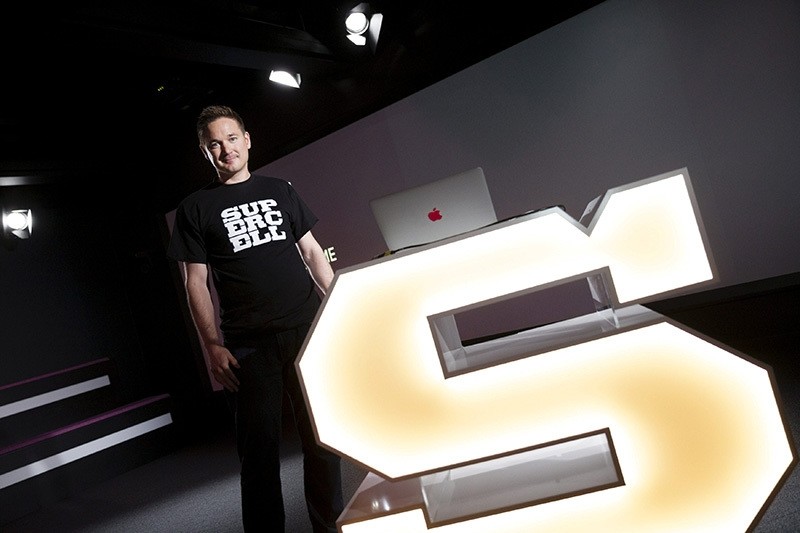 Finnish game company Supercell Co-Founder and CEO Ilkka Paananen poses while meeting with the press in the company's headquarters in Helsinki, Finland June 21, 2016. (Reuters Photo)
by Jun 22, 2016 12:00 am

"The board is pleased to announce that on 21 June 2016, the consortium... has agreed to acquire a majority equity interest in Supercell," said a Tencent statement to the Hong Kong stock exchange, where the firm is listed.

In addition to "Clash of Clans", Supercell is the creator of other hugely popular mobile games such as "Clash Royale" and "Hay Day".

Tencent said Supercell management would retain operational independence and the firm would still be based in Finland.

SoftBank, led by colourful Japanese billionaire Masayoshi Son, has picked up an assortment of firms in recent years including its $21.6 billion purchase of US-based mobile giant Sprint.

However, the buying spree has put pressure on SoftBank's finances and it is working to improve its balance sheet, including selling a stake worth at least $7.9 billion in Chinese e-commerce giant Alibaba.

In a joint statement by the three companies, Son said it was SoftBank's "privilege to be part of Supercell's incredible growth story".

"I have great respect for Tencent and its leadership in games, and believe that with its commitment to respect Supercell's independence, Tencent represents the ideal partner to take Supercell's business to the next level," Son said.

Tencent's president Martin Lau stressed the need for Supercell to preserve its independence.

"It is important to us that Supercell stays true to its roots by sustaining its unique culture," Lau said, adding that the company is "dedicated to building long-term strategic partnerships with leading game companies".

Supercell chief executive officer Ilkka Paananen said the company has created four top games in the past six years which are now being played by over 100 million people every day.

"This new partnership offers us exciting growth opportunities in China, where we will be able to reach hundreds of millions of new gamers."

"It will solidify their leading position in the mobile game area. It's a good purchase for them although the price is a bit steep," Geo Securities chief executive officer Francis Lun told AFP.

"If they want to maintain the leading position that they have now, they have to make acquisitions," Lun said, adding that mobile games have a shelf-life of only around six months.

"For Tencent, acquisition is the only way they can expand their business because they are now one of the largest Internet companies in mainland China," Wong said.

Southeast Asia is seen as a promising growth area. Its mobile games revenues are expected to grow sixfold to over $7.0 billion in the next five years thanks to smartphones and high-speed Internet access, business consultancy Frost & Sullivan said last year.

Tencent in May reported a 33 percent surge in net profit for the first quarter of 2016 to 9.18 billion yuan ($1.42 billion), beating analyst estimates.