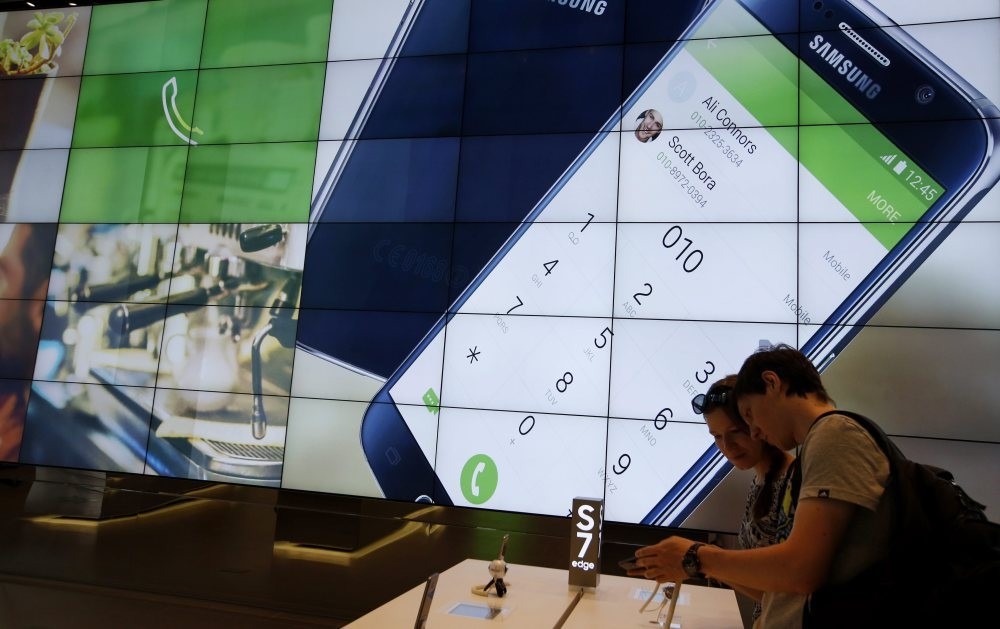 Foreign visitors look at a Samsung Galaxy S7 and a Galaxy S7 Edge smartphones in a showroom at the SamsungElectronics headquarters in Seoul. (EPA Photo)
by Jul 08, 2016 12:00 am

South Korean technology giant estimated its second quarter profit was $6.9 billion, a 17-percent increase over the same period last year. The rise was attributed to strong sales of its flagship smartphones

The South Korean electronics giant and world's top handset maker predicted an operating profit of 8.1 trillion won ($7 billion) in April-June, up 17 percent from a year ago. It is the company's biggest operating profit since the first quarter of 2014 and beat the average estimate of 7.4 trillion won from analysts surveyed by Bloomberg News. Analysts attributed the figures to the firm's aggressive cost-cutting efforts and brisk sales of the Galaxy S7, the latest version of its high-end, flagship smartphone.

"Samsung's mobile unit is believed to have performed well thanks to robust sales of Galaxy S7s as well as an overhaul of its low- and mid-end handset line-up," said Peter Lee, analyst at NH Investment & Securities. He estimated that the firm had sold about 26 million units of the S7 since it hit stores in March ahead of new launches by competitors, including Apple. Samsung has bolstered its mid- to low-end smartphone line-ups in a bid to expand in fast-growing emerging markets. The mobile business accounts for the lion's share of the firm's overall profit, which has been increasingly squeezed by competition from both Apple's iPhone and lower-end devices from Chinese rivals such as Huawei. Past editions of its flagship smartphones such as Galaxy S5 and S6 launched in 2014 and 2015, respectively, were largely met with tepid response, prompting concerns over the firm's overgrown mobile business.

Samsung shares jumped yesterday 2.04 percent to close at 1.45 million won in Seoul. The firm's aggressive cost-cutting in marketing played a key role in the strong profit forecast, Greg Roh of HMC Investment said, but he warned of more competition from Apple later this year.

"With Apple releasing new products in the latter half of the year... I think (Samsung's) earnings may drop in the second-half," he said. But the firm's semiconductor business, which produces memory chips for Samsung gadgets as well as clients including Apple, is likely to help offset a slump in the mobile business, Lee said.

Samsung was the first to mass produce chips using the technology and is producing the high-margin chips - used in mobile gadgets and hard drives for servers - at its factories at home and in China.

"Competitors are trying to increase their 3D NAND production capacity... but Samsung is expected to lead the market for a while given the technological gap," said Kwong Sung-Ryul, analyst at Dongbu Investment and Securities.

Yesterday's forecast, which comes ahead of audited results to be released this month, did not provide a net income figure or breakdown of divisional earnings for the company's mobile, TV, semiconductor and display units. It predicted second-quarter sales of 50 trillion won, up from 48.5 trillion won a year ago.
Last Update: Jul 08, 2016 1:08 am
RELATED TOPICS