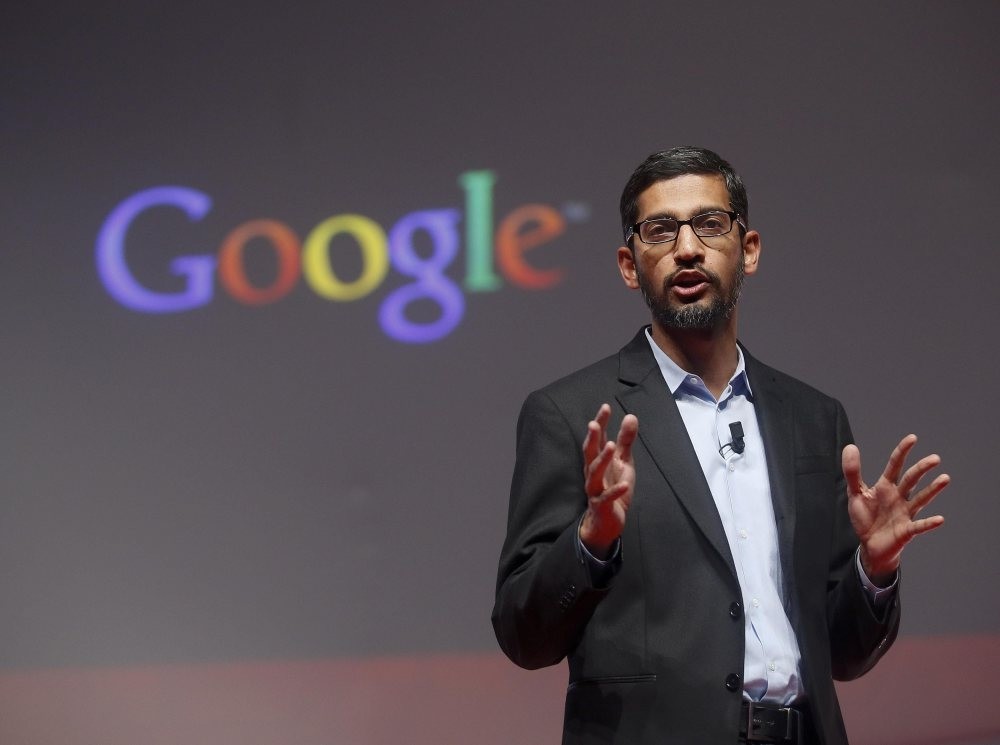 Analysts anticipate that the internet titan will expand on a vision laid out by chief Sundar Pichai at its developers conference early this year.
by Oct 03, 2016 12:00 am

A high-profile Google event Tuesday is widely expected to show a new emphasis on hardware, challenging rivals Apple and Amazon and launching a new strategy for the online giant

Google is expected to unveil a new line of Google-branded smartphones, a tablet and a home virtual assistant, tomorrow. Analysts anticipate that the internet titan will expand on a vision laid out by chief Sundar Pichai at its developers conference early this year. The strategy would seek to take Google's strength in software and merge that with its devices, as Apple, Amazon and smartphone leader Samsung all work to get a tighter grip on consumers.

Google fired off a Twitter message with hashtag #madebygoogle and a video of what appeared to be a long rectangular search term box morphing into a silhouette of a smartphone.

"They did call it out as a smartphone event," Gartner analyst Brian Blau said. "It is an opportunity for Google to show off its latest devices."

Industry trackers anticipate Google will show off its own smartphone, showcasing the prowess of its new Nougat version of its Android mobile software. Google may stamp its latest smartphones with a "Pixel" brand instead of the "Nexus" name it has used in the past for Android smartphones it has made in collaborations with partners. Google has worked with handset makers in the past to field smartphones showing off the full potential of Android mobile operating software, which it makes available free to device makers.

By stressing something "made by Google," the California company has triggered speculation it would push a premium smartphone line of its own against the likes of Apple and Samsung.

Apple recently released new iPhone 7 models, along with its new-generation iOS 10 mobile operating system. Samsung meanwhile has been struggling with a recall of 2.5 million Galaxy Note 7 handsets due to complaints of exploding batteries.

The Google gathering is expected to go beyond smartphones, however, with the company possibly showing off a new Chromecast device for streaming online content to television screens, a Wi-Fi router, and perhaps announcing when it will release Google Home virtual assistant.

Blau anticipated that Google will build on announcements it made at the developers conference, along with revealing partnerships for apps or services intended to make devices more enticing. At the gathering in May, Google unveiled a virtual home assistant that will challenge Amazon's Echo and laid out a future rich with artificial intelligence. Google Home, about the size of a stout vase, was to hit the market by the end of this year, but exact timing and pricing was not disclosed. Home devices will incorporate new Google virtual assistant software introduced by Pichai.

"Our ability to do conversational understanding is far ahead of what other virtual assistants can do," Pichai said at the developers conference.

"We are an order of magnitude ahead of everyone else."

Home devices combine machine learning, online search, voice recognition and more to allow people to get answers to questions, manage tasks, or control devices by speaking naturally, demonstrations showed. Home will synch with Chromecast devices that allow remote control of televisions or stereo systems, and with "smart" devices made by Google-owned Nest and other companies, company executives promised. Blau also expected the Google event to feature news about Daydream, a virtual reality platform that the company said is coming.

That could manifest in the form of a headset into which Daydream-enabled phones serve as screens for virtual reality experiences. "Daydream does go hand-in-hand with the smartphones," Blau said.

Some reports ay the event could include the debut of a seven-inch tablet computer made by Chinese consumer electronics giant Huawei and running on Google software.

As the event neared, speculation mounted that Google might also discuss a long-anticipate merging of its Chrome and Android operating systems, and introduce a new Pixel laptop powered by the software. Google might call the new operating system "Andromeda," according to some reports.

"The new Andromeda OS is expected to bring some of the desktop-like capabilities of Chrome into Android to form a super OS that could work across smartphones, tablets, and notebook-style form factors," Technalysis Research chief analyst Bob O'Donnell said

Such a new desktop style operating system would have the potential to challenge Microsoft Windows and Apple MacOS software for powering computers.

The splitting of Android software, or "forking," has created a situation in which one almost needs to toss out old handsets and buy new ones to upgrade operating systems, according to the analyst.
RELATED TOPICS