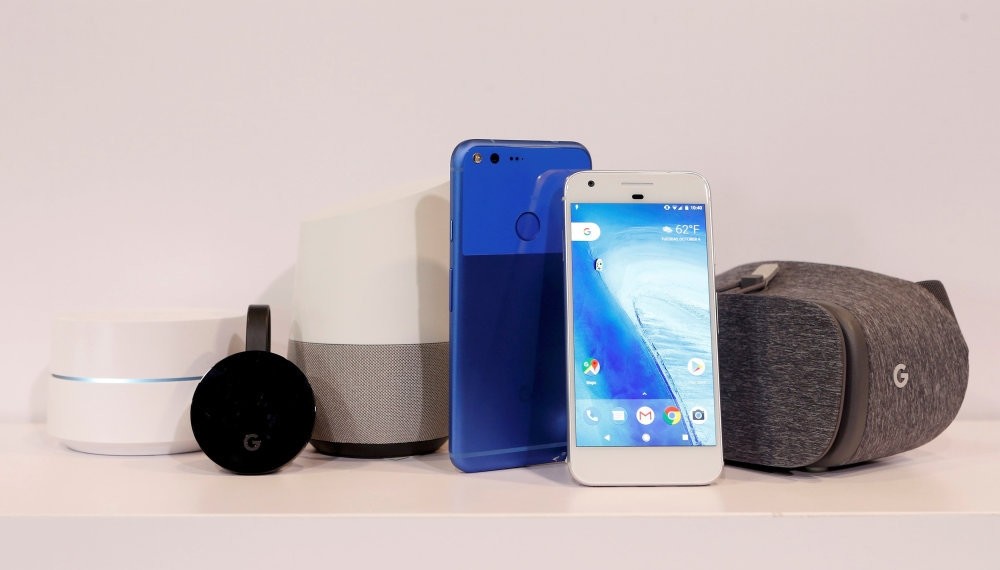 The Internet giant ratcheted up its rivalry with Apple and Amazon by unveiling new smartphones, an Internet-connected speaker that channels a digital assistant and other gadgets

Google took on rivals Apple, Samsung and Amazon in a new push into hardware Tuesday, launching premium-priced Pixel smartphones and a slew of other devices showcasing artificial intelligence prowess. The unveiling of Google's in-house designed phone came as part of an expanded hardware move by the U.S. company, which also revealed details about its new "home assistant" virtual reality headset and Wi-Fi router system.

The San Francisco event marked a shift in strategy for Google, which is undertaking a major drive to make Google Assistant artificial intelligence a futuristic force spanning all kinds of Internet-linked devices.

"We are evolving from a mobile-first world to an AI-first world," Google Chief Executive Sundar Pichai said.

"Our goal is to build a personal Google for each and every user."

Rick Osterloh, head of a new hardware division at the California-based Internet giant, added, "We believe that the next big innovation is going to take place at the intersection of hardware and software, with AI at the center."

Pixel will be available with a five- or 5.5-inch display, starting at $649 for U.S. customers, similar to the latest iPhone models. Pre-orders began Tuesday in Australia, Canada, Germany, Britain and the United States. By using its own name on handsets, Google is aiming for a bigger slice of the competitive smartphone market, dominated by Samsung and Apple.

Until now, Google's flagship devices had used the Nexus brand with hardware partners that have included China's Huawei and South Korea's LG. The California group also sought to expand in the smartphone market by purchasing Motorola in 2011, but sold the unit less than three years later.

Unlike past smartphone alliances, Google stressed that it had complete control of Pixel from start to finish, contracting with Taiwan-based HTC to manufacture handsets.

The new Pixel phone is "the first phone made by Google inside and out," said Sabrina Ellis of the Pixel product management team. By producing both the hardware and Android software, Google is making a more direct assault on Apple and its tightly controlled ecosystem. Besides being the first smartphone to ship with Google Assistant, it will come with unlimited storage for photos and videos and be compatible with the company's new Daydream virtual reality platform.

Pixel has a "smart" camera for sublime photos and a program to make it easy for users to switch operating systems, a move aimed at encouraging iPhone users to convert to Android. However, Google may find it challenging to gain market share, analyst Patrick Moorhead of Moor Insights & Strategy said. "Aside from the camera, the new Google Pixels are pretty undifferentiated compared to Samsung and iPhone 7th generation phones," he said. "They don't exactly swing anyone around the room."

Gartner analyst Brian Blau said "the most exciting part" of Tuesday's announcement was the assistant, which showcases Google's strength in artificial intelligence. "It's a different tactic from Google, taking the stance that they want to have that direct relationship with their customers," he said. "It is clearly a step into Apple's world" of controlling hardware and software and services, he added. Google also showed off a new Daydream View headset into which compatible smartphones can be slipped to serve as screens for virtual reality experiences. Google added to the coming hardware line-up with a modular Wi-Fi system that lets a set of interconnected mini-modems be spread around homes to make signals strong in all spots. The Internet giant also introduced its Google Home virtual assistant, which will be a direct challenge to popular Amazon Echo devices.

Google described Home as a voice-activated assistant that enables users to tap into the company's online capabilities to answer questions, manage tasks, control devices in homes, stream videos and more. Google Home was also synced to work with the freshly unveiled Chromecast Ultra device for streaming high-resolution online video to television screens. The $129 Google Home device will be available in retail shops on Nov. 4.
RELATED TOPICS