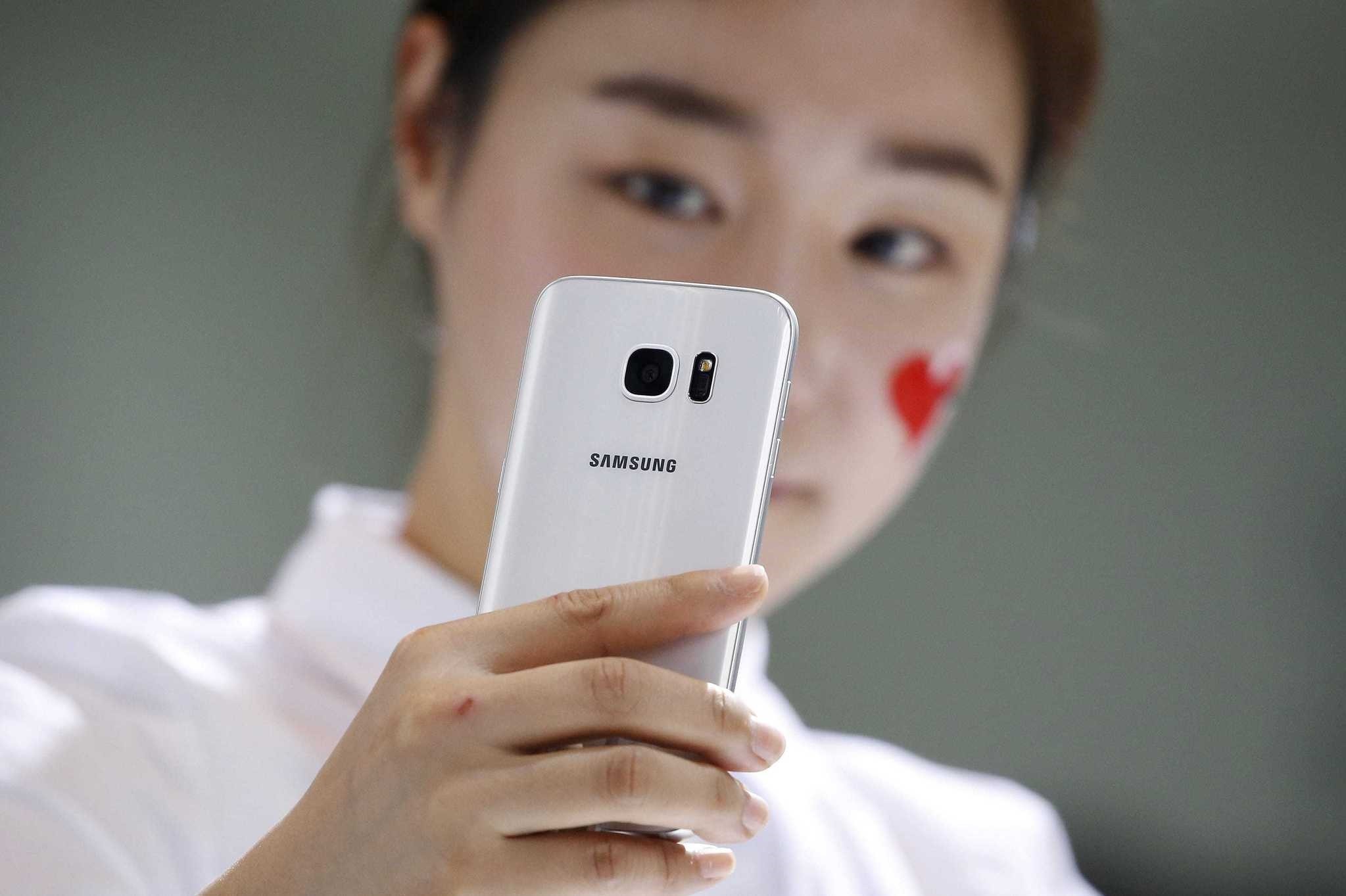 A model demonstrates Samsung Electronicsu2019 new smartphone Galaxy S7 during its launching ceremony in Seoul.
by Compiled from Wire Services Oct 25, 2016 12:00 am
Samsung Electronics Co Ltd said yesterday it is offering an upgrade program to Galaxy Note 7 customers in South Korea who trade in their recalled device for a Galaxy S7 phone, marking its latest bid to hang on to customers, according to Reuters. In a statement, Samsung said customers who trade in their Note 7 phone for either a flat-screen or curved-screen version of the Galaxy S7 can trade up for a Galaxy S8 or Note 8 smartphone launching next year through an upgrade program.

The world's top smartphone maker permanently ended Note 7 sales due to continued reports of fire from the flagship device. Samsung, in addition to offering refunds or exchanges for a Galaxy S7 smartphone, has already offered financial incentives amounting to 100,000 won ($88.39) to affected customers in South Korea. Users in the upgrade program will need to pay only half the price of a Galaxy S7 device, rather than the full amount, before exchanging to the S8 or the Note 8, Samsung said. In offering the Note 8, Samsung indirectly reinforced previous statements that the Note series will not be discontinued. Samsung has stepped up marketing and promotion for its Galaxy S smartphones to try to make up for some of the lost sales. The Note 7's collapse is already costing Samsung $5.4 billion won in operating profit between the third quarter of this year and the first quarter of 2017.

Some experts and analysts say Samsung will need to offer incentives to affected customers as part of their efforts to limit long-term damage to its brand and reputation from the Note 7's failure.

Meanwhile, hundreds of South Korean Galaxy Note 7 smartphone owners were preparing yesterday to file a lawsuit against Samsung Electronics over the fire-prone device, according to AP. Attorney Peter Young-Yeel Ko, head of the Harvest Law Firm said yesterday that 527 consumers want Samsung to compensate them for the costs to visit shops to exchange their phones, for the hours they had to wait while transferring data and for psychological harm from using a hazardous product. His clients include a consumer who claims to have lost thousands of pictures from a family vacation and another who drove eight hours round-trip to return the phone. Samsung recalled the Galaxy Note 7 phone because it tends to overheat. It recalled replacement Note 7s after

finding they also were prone to catch fire, the company stopped making or selling them. Ko, a longtime Samsung phone user, said he had to visit a mobile shop three times after buying the Note 7 in August, first to get the battery checked when reports of the devices catching fire first surfaced. He went back to get a replacement phone after Samsung's first recall and again after the company's second Note 7 recall.

Kim Chae Yong, who joined the lawsuit, said he spent nearly $100 on gas and highway fees to return a Note 7 phone after the first recall. Kim drove about 300 kilometers (185 miles) from his home in Cheonan to Busan, where he had bought the Note 7. "I feel betrayed," the 26-year-old plant engineer said. "I am angry and I don't ever want to use it again."
RELATED TOPICS