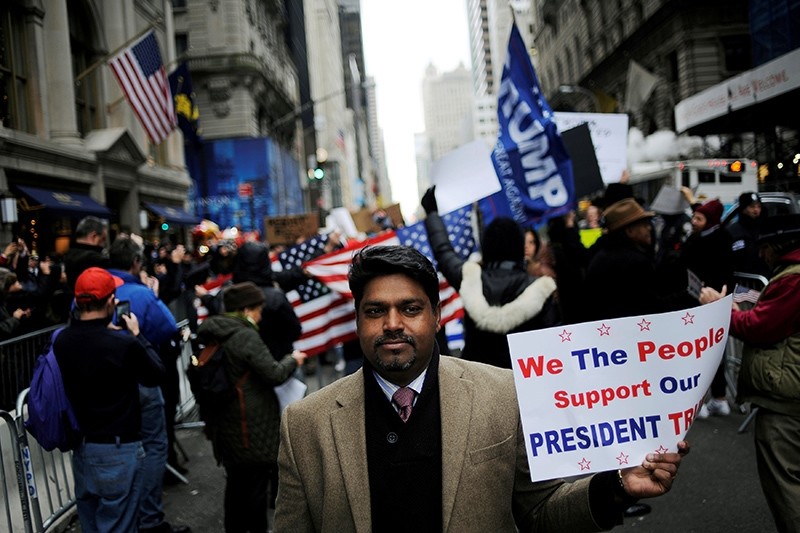 A supporter of U.S. President-elect Donald Trump walks away from a protest near Trump Tower in the Manhattan borough of New York, U.S. November 20, 2016. Picture taken November 20, 2016 (Reuters Photo)
by Dec 01, 2016 12:00 am
U.S.-based news sharing and discussion website Reddit will take action against "toxic users," in particular some of president-elect Donald Trump's supporters, the chief executive and co-founder said Wednesday.

"We have identified hundreds of the most toxic users and are taking action against them, ranging from warnings to timeouts to permanent bans," Steve Huffman, who writes under the username "spez," said in a post on the site.

Huffman's post highlighted "r/the_donald," a subreddit or section of the site that was created and used by Trump supporters.

"The community that was formed in support of president-elect Donald Trump organized and grew rapidly, but within it were users that devoted themselves to antagonizing the broader Reddit community," Huffman said in his post.

Many users have asked Reddit "to ban the r/the_donald outright," Huffman said, adding that he had resisted doing so in a "spirit of healing."

The election had shown that "there are communities that feel alienated and just want to be heard, and Reddit has always been a place where those voices can be heard," he said.

Reddit allows users to share posts that are then voted up or down by the community. In his post, Huffman said that r/the_donald users had abused a "sticky" feature meant to provide announcements as a way to "circumvent organic voting."

Huffman came under fire after admitting last week that he had edited comments on the website, replacing his own username in abusive comments with the usernames of r/the_donald moderators.
Last Update: Dec 02, 2016 4:15 am
RELATED TOPICS