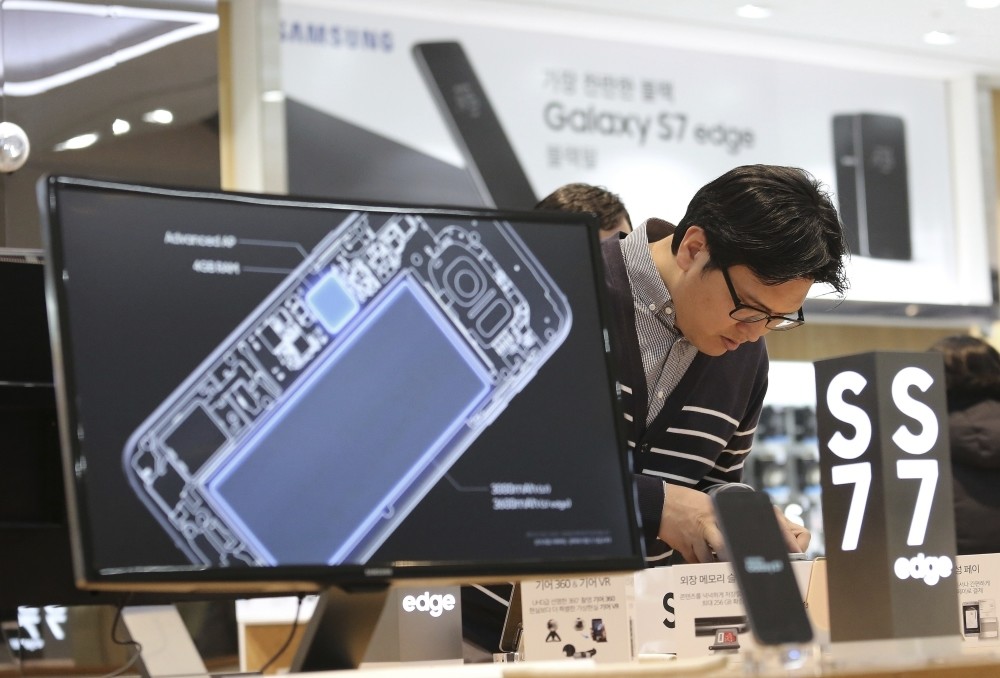 A visitor tries out a Samsung Electronics Galaxy S7 Edge smartphone at its shop in Seoul.
by French Press Agency - AFP
Jan 25, 2017 12:00 am

The South Korean tech giant expects profit growth in 2017 despite challenges arising from political uncertainty, after record chip earnings glossed over the Note 7 smartphone fiasco in the fourth quarter

Samsung Electronics' profits leaped in the fourth quarter, it said Tuesday, despite the humiliating Galaxy Note 7 recall that hammered the reputation of the world's largest smartphone maker.The South Korean tech giant took another blow when prosecutors began investigating its involvement in a corruption scandal, which has seen the country's president impeached, and sought the arrest of the firm's de facto leader Lee Jae-Yong.

In a statement, the group's flagship subsidiary Samsung Electronics said it posted operating profits of 9.22 trillion won ($7.9 billion) during the October to December period, up 50.2 percent year-on-year.Net profits for the quarter were 7.09 trillion won, up 120 percent. Earnings were "driven by the components businesses, mainly the memory business and the display panel segment," it said, with the stronger U.S. dollar also boosting profits. Analysts say memory chip prices have been driven up by stronger demand as Chinese smartphone makers release devices with high resolution cameras and bigger storage in a bid to catch up with Samsung and Apple. As the market leader in multiple segments, Samsung's own chip division "is the biggest benefactor," said Tom Kang, research director at Counterpoint Technology. Samsung said it expected "huge growth" in the sector, and looking forward to 2017, Greg Roh, an analyst at HMC Investment Securities, told AFP: "We are expecting Samsung to post record-high profits this year on the back of rising chip prices."

For the full year of 2016, the firm said in a statement, "Samsung achieved solid results despite the Note 7 discontinuation in the second half" - the only reference to the debacle that saw the company withdraw its much-publicized device, originally intended to compete with Apple's iPhone. Samsung was forced to discontinue the Galaxy Note 7 in October after a chaotic recall that saw replacement devices also catching fire. In total, 3.1 million smartphones were recalled as authorities in the U.S. and elsewhere banned them from use on planes and even from being placed in checked luggage. Earlier this week Samsung blamed faulty batteries from two different suppliers for the incidents, which the firm previously estimated would cost it $5.3 billion. Samsung has also come up with elaborate step-by-step safety verification procedures for future products to prevent similar disasters, although some analysts remained skeptical.

The findings suggested a lack of attention to product testing and a tendency to rush to market for competitive reasons at the expense of quality control, said Jan Dawson, chief analyst at Jackdaw Research.

"I have confidence that Samsung will make big process changes going forward, but less confidence that the culture that led to these problems will change in the same way," he told AFP.

Separately, Samsung said in a statement it will buy back 9.3 trillion won worth of its own shares. Full-year revenues for 2016 were almost flat at 201.9 trillion won, up 0.6 percent, but net profits rose 19 percent to 22.7 trillion won, Samsung said. The firm has separately been caught up in a wide-ranging political corruption scandal, with prosecutors last week seeking the arrest of Lee, vice chairman of Samsung Electronics, on charges of bribery, embezzlement and perjury.