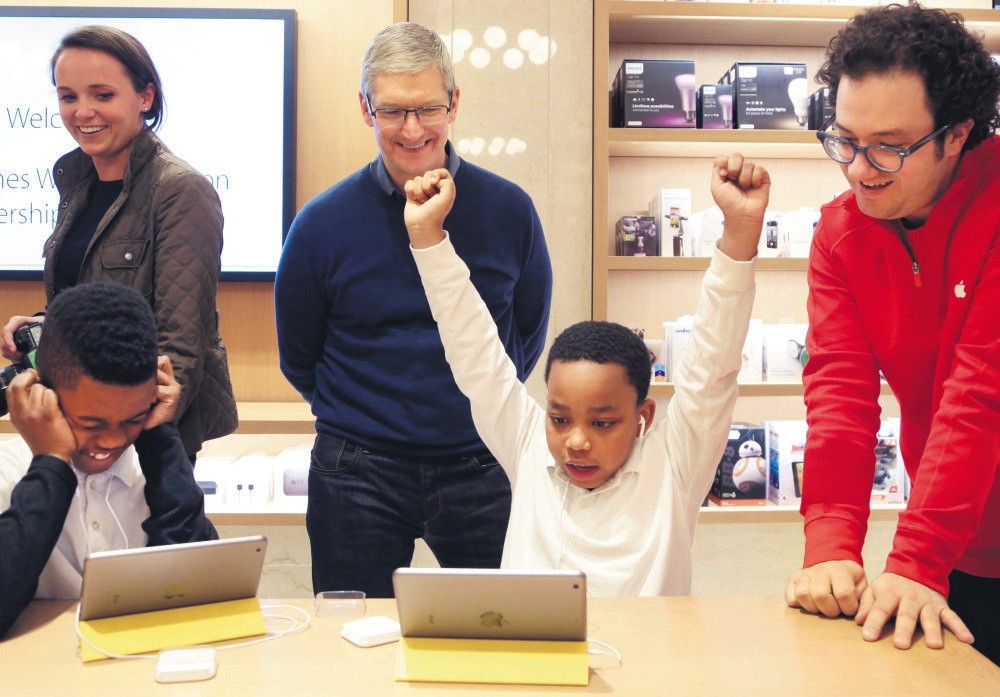 Jaysean Erby raises his hands as he solves a coding problem as Apple CEO Tim Cook watches from behind at an Apple Store, in New York
by Associated Press Jan 26, 2017 12:00 am

The tech industry brought us self-driving cars, artificial intelligence and 3-D printers. But when it comes to racial and gender diversity, its leading companies are no trailblazers. Despite loudly touted efforts to hire more blacks, Latinos and women, especially in technical and leadership positions, diversity numbers at the largest tech companies are barely budging.

In 2014, 2 percent of Googlers were black and 3 percent were Hispanic, numbers that have not changed since. The picture is similar at Facebook and Twitter . Microsoft is slightly more racially diverse (though not when it comes to gender) and Apple even more so, though still not reflective of the U.S. population. Amazon is more racially diverse still, although it counts a large, lower-wage warehouse workforce in its totals. Women, meanwhile, make up less than a third of the workforce at many companies -even less in engineering and other technical jobs.

Tech companies themselves tend to blame a "pipeline problem," meaning a shortage of women and minorities with technical qualifications. But a number of academic experts, industry employees and diversity advocates say there's a bigger problem. Silicon Valley, they argue, has failed to challenge its own unstated assumptions about what makes for great tech employees.

"The people who are doing the hiring are not changing their thinking around what they view as qualified," says Leslie Miley, engineering director at the message-service startup Slack. Hiring managers, he says, spend too much time worrying that applicants who don't fit techie stereotypes aren't "Google-y enough or Facebook-y enough or Apple-y enough or Twitter-y enough." Miley, who is African-American, previously worked as an engineer at Twitter, Apple, Google and Yahoo.

Companies are spending a lot of time and money on improving diversity. Two years ago, Intel splashily set itself the goal of achieving full representation in its workforce by 2020. Despite committing $300 million to the effort and making some early progress , Intel acknowledges there is "a great deal of work to be done."

Similar programs are in place throughout the industry, from outreach at high schools and historically black colleges to internship and mentoring programs and sponsorships for coding boot camps. So far, to little avail.

Why? Interviews with more than 30 tech workers, executives and diversity advocates suggest the blame lies with subtle biases in hiring, unwelcoming work environments and a paucity of diverse role models in top positions.

Aniyia Williams, founder and CEO of the startup Tinsel, says companies should focus on their own culture rather than blaming external factors they can't control, such as limited computer-science education in U.S. schools. It's not enough to release diversity reports and say, "Oh, not a lot has changed, but it's the world, not us that's the problem," she says.

Diversity isn't just about fairness. It's about having designers who reflect the diversity of the people they are designing for. For tech companies hoping to reach millions or billions of users, a lack of diversity could mean their products "will not appeal to a large population," says Lillian Cassel, chairwoman of computer sciences at Villanova University. Diverse perspectives can also help prevent grievous errors -such as a problem that arose at Google in 2015, when a photo-recognition feature misidentified black faces as gorillas.
RELATED TOPICS