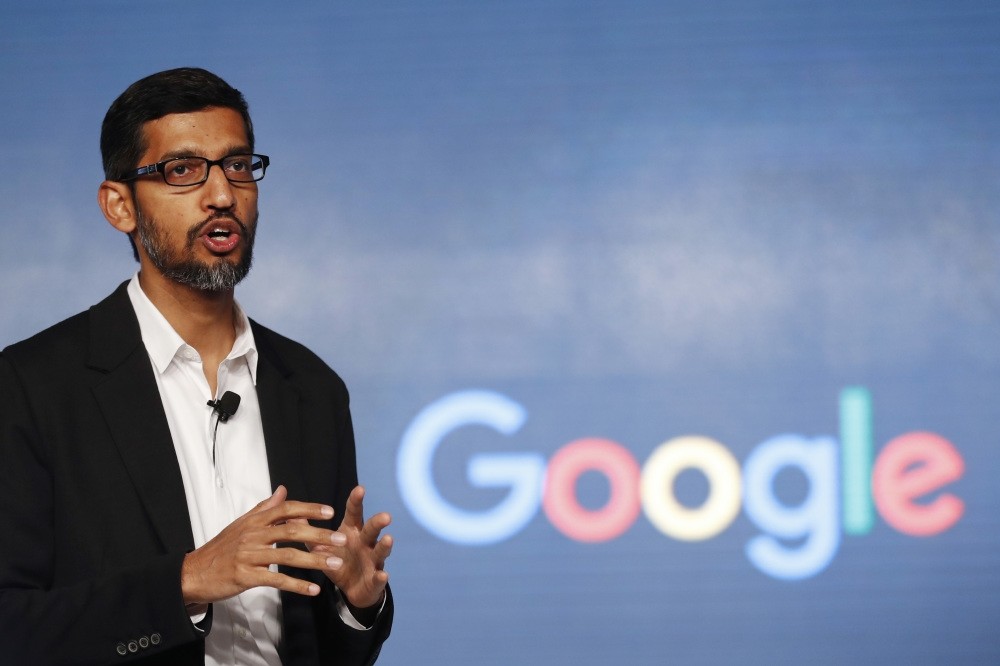 Google CEO Sundar Pichai speaks during a news conference on Googleu2019s collaboration with small scale local businesses in New Delhi.
by Anadolu Agency Feb 03, 2017 12:00 am
Google has become the world's most valuable brand, taking the reins from Apple, independent consultancy Brand Finance announced in its Global 500 report. The search engine's brand value rose 24 percent to $109.5 billion in this year's report, from $88.2 billion last year. The company "enables the world's biggest brands reach their customers and build their own brand equity [through search and advertising respectively]," the report said.

"Google remains largely unchallenged in its core search business, which is the mainstay of its advertising income," it added. Apple's brand value fell 27 percent to $107.1 billion from $145.9 billion in the 2016 report; thus losing its lead as the most valuable brand - a title it held since 2011. The tech giant's "evangelists are beginning to lose their faith. The snaking queues of early adopters have shrunk almost to the point of invisibility," the report noted.

"Put simply, Apple has over-exploited the goodwill of its customers, it has failed to generate significant revenues from newer products such as the Apple Watch and cannot demonstrate that genuinely innovative technologies desired by consumers are in the pipeline," it added. The report also stressed that the Apple brand "has lost its luster and must now compete" with Chinese smartphone manufacturers like Huawei and OnePlus, in addition to its traditional South Korean rival Samsung.

Amazon retained third place on the list with $106.4 billion, despite increasing its brand value by 53 percent from last year.

"Amazon has stated it will create 100,000 jobs in the U.S. over the next 18 months. Such confidence suggests that Amazon may well see a new brand at the top of the Brand Finance Global 500 in 2018," the report said.

Brand value is calculated by scaling a company from 0 to 100, based on its emotional connection, financial performance, sustainability, and taking current and future revenues of the company into account, on top of its core businesses, licensing agreements and portfolio management.
Last Update: Feb 03, 2017 1:20 am
RELATED TOPICS