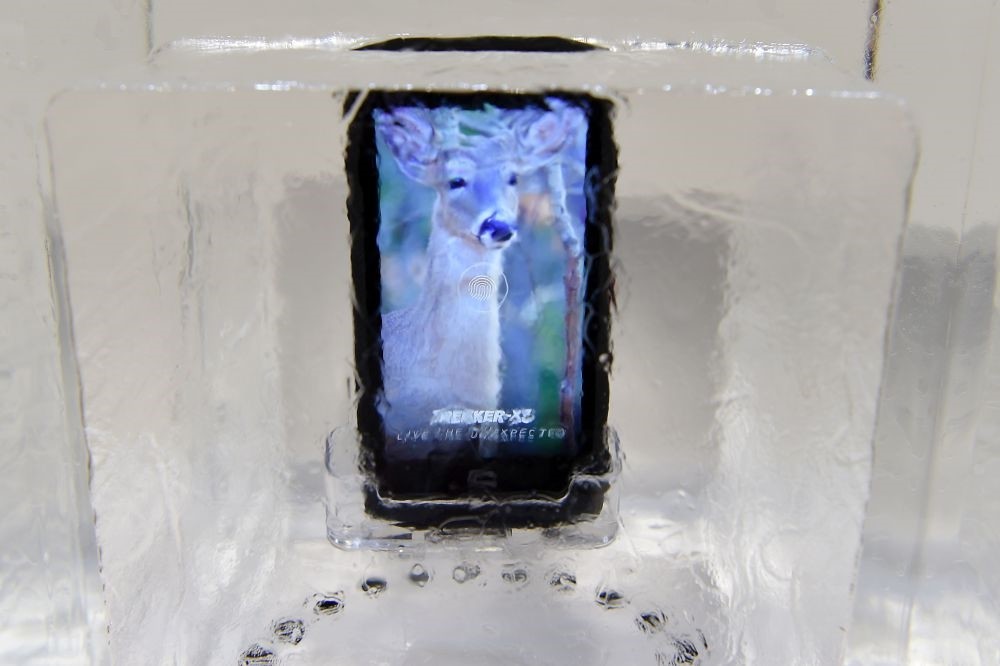 A Crosscall Trekker-X3 smartphone inside a block of ice on the first day of the Mobile World Congress in Barcelona.
by Mar 03, 2017 12:00 am
Phones rugged enough to survive falling from the sky or resistant to foaming hand soap - just some of the special features mobile phonemakers are offering to appeal to niche markets.

"The smartphone market is so enormous that even having a phone that is targeting a niche can still sell hundreds of thousands, if not millions of units over its life," said Ian Fogg, head of mobile research firm IHS.

"1.5 billion smartphones will ship in 2017. Even a company that is targeting a fraction of a percent can still have a product with very significant volumes."

Several "niche phones" were on display at the four-day Mobile World Congress in Barcelona which wraps up yesterday seeking to attract markets ranging from adventure sport enthusiasts to busy mothers. Bullitt Group, a small British firm, showcased its extremely rugged phones that carry the branding of U.S. construction giant Caterpillar which can withstand heat up to 120 degrees Celsius (248 degrees Fahrenheit) and temperatures as low as minus 20 degrees Celsius. The devices are also waterproof and come with a thermal imaging camera. Bullitt sells over a million Caterpillar phones a year. They are popular with ski instructors, builders and others with rugged jobs or those who like outdoor activities.The phones have an ardent fan base. Videos posted on YouTube by satisfied customers show the devices surviving falls into fresh cement, falling down a flight of stairs or being run over by a car.

"We have even had one of our phones fall out of someone's backpack when they were parachuting and land and work afterwards. It got banged up on the way down but it was still working," said Bullitt's chief executive Peter Stephens.

Bullitt plans to launch a Land Rover-branded phone later this year that targets adventurers. The company is reluctant to reveal details but Stephens said it will "have elements that appeal to someone who is away from energy sources for a very long time."

Bullitt released a Kodak smartphone in December that features a retro design and a high-powered camera and software with exceptional tools to edit images.

"We have got a huge list of niches that you could enter," said Stephens.

Swedish telecoms firm Doro began focusing on creating easy-to-use phones for the elderly a decade ago and is now the market leader in Europe in this segment.The devices feature large icons, easy menus and loud, clear sound as well as an alarm button that can be used to alert relatives in case its user needs help. The company also makes it possible to manage its smartphone's settings through a web service so more tech-savvy friends or family can help users add contacts or adjust the device's volume from miles away.
RELATED TOPICS