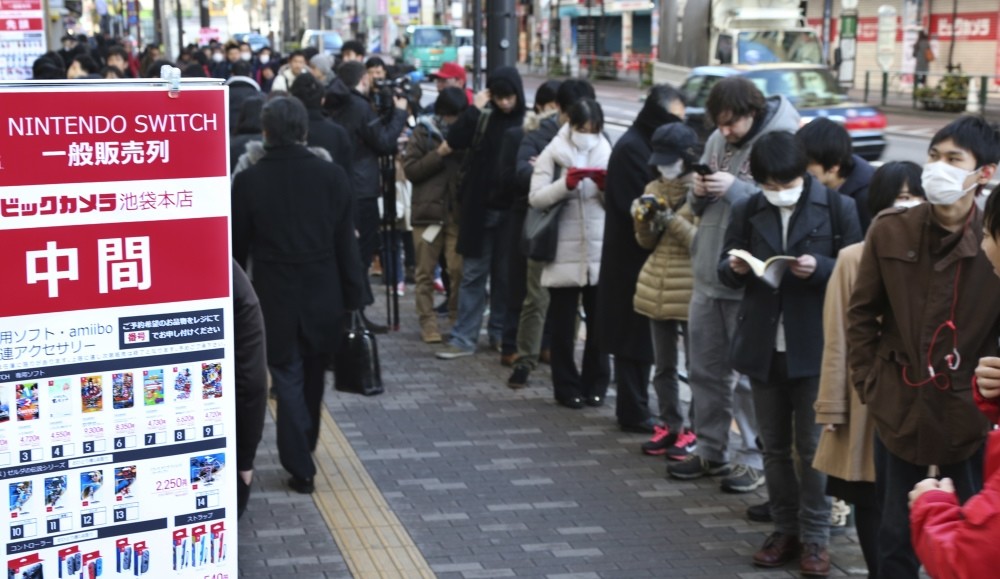 The $299 unit, which works both at home and on the go, blends the Super Mario maker's history in the console business with its fledgling mobile gaming strategy, which got a big brand win after Pokemon Go's success

Nintendo's Switch console went on sale Friday in a global launch seen as key for the Japanese videogame giant to reverse flagging sales and compete with Sony's top-selling PlayStation 4. The $299 unit, which works both at home and on the go, blends the Super Mario maker's history in the console business with its fledgling mobile gaming strategy, which got a big brand win after Pokemon Go's success last summer. Switch went on sale in Japan around 9:00 a.m. local time on Friday. Kyoto-based Nintendo is aiming to move about 2 million Switch consoles in its first month.

Strong demand for the new unit would help Nintendo move on from poor sales of its last console, Wii U, released in 2012. It marked a disappointing follow-up to smash hit Wii, which sold over 100 million units worldwide after its launch a decade ago. Switch has a removable screen that lets players dock it at home and also use it on the go like a tablet with detachable controllers - called Joy-Con - on both sides. The idea is to give gamers a more immersive experience with realistic physical sensations matched to what is happening on-screen. A remote control feature means players can take their eyes away from the screen to face off. There are only eight games available for the system initially, including a Legend of Zelda offering. But there are scores more in the pipeline, Nintendo has said.

Around 400 gamers eager to get their hands on the new console lined up at a major retailer in Tokyo's Ikebukuro district from early Friday morning.

"This is the first time I've bought a Nintendo console," said 25-year-old Yuki Matsuzaki after standing in the long queue.

"I purchased the PlayStation 4, but the appeal of this Nintendo unit is the action and storyline in the games."

An outlet of major electronics retailer Yodobashi Camera in Kawasaki near Tokyo said it has no extra stock to sell to customers who had not pre-ordered their units.

In past years, Nintendo has scored hits with traditional home consoles, such as the Nintendo 64, and portable devices like GameBoy and the DS handheld.

"Switch is probably one of the most important consoles for Nintendo in the past decades," said Serkan Toto, a Tokyo-based games industry consultant.

"It's the first time where Nintendo basically combines portable games and home console games into one device."

But trying to score a win in two different markets has risks, Toto added.

"Some people could say that Nintendo is trying to kill two birds with one stone and that it could actually land in the middle and not really catch any of the target groups," he said.

Investors were initially underwhelmed, with Nintendo's shares down about 15 percent from October, when the firm gave gamers a sneak peak of its newest console. But the Tokyo-listed stock rebounded Friday morning, jumping nearly four percent as Switch went on sale in Nintendo's home market. Nintendo has been under pressure to fix its weak finances - annual sales have been falling for years - as it goes head to head with console maker rivals Microsoft and Sony, which has racked up huge sales of its latest PlayStation. More than 53 million units of the PS4 have been sold globally since its debut in late 2013.