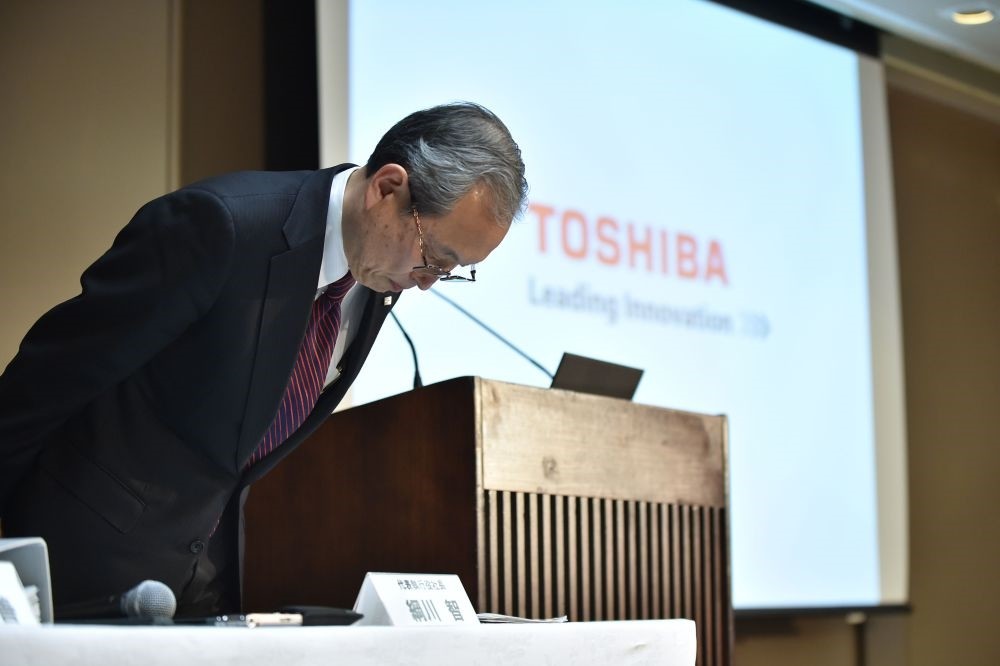 Toshiba Corp. President Satoshi Tsunakawa bows at the beginning of the press conference at the company's headquarters in Tokyo yesterday.
by Mar 15, 2017 12:00 am

The troubles at crisis-hit Toshiba are the latest in a string of business scandals that highlight how the backbone of Japan's corporate culture - unwavering employee loyalty - can sometimes lead to disaster, analysts say

Toshiba's stock has been sliced in half since late December when it first flagged multi-billion-dollar losses at U.S. nuclear unit Westinghouse Electric, and revealed allegations of accounting fraud by senior managers at the division. Yesterday, Toshiba said it was delaying the release of its October-December earnings for a second time as it probed the embarrassing allegations, with fears growing that the pillar of corporate Japan could be delisted from the Tokyo bourse. President Satoshi Tsunakawa also said the company was looking at selling its majority stake in Westinghouse and making a priority trying to get the energy giant's battered results off its books.

The scandal came less than two years after its reputation - and balance sheet - was hammered by separate revelations that top executives pressured underlings to cover up weak results for years after the 2008 global financial crisis.

"In other countries where you have corporate governance missteps and failure, many of them are motivated by personal greed, self-interest of some kind," said Nicholas Benes, head of the non-profit Board Director Training Institute of Japan.

"Here it happens very rarely. The more frequent case is when people think they are doing it for the company's self-interest - it is a misplaced loyalty."

This allegiance is closely linked to post-war Japan's meteoric rise from shattered nation to the world's number two economy. Employees did not ask questions and devoted themselves to the company's success in return for lifetime employment. Those powerful bonds have weakened over the decades as the economy soured and firms laid off workers. But the structure of corporate Japan still puts a company's reputation above all else, which sometimes leads to hiding facts, delaying announcements or trying to meet a superior's impossible demands, analysts said.

"They tend to think that if this problem comes to light it's going to drag down the company's stock price," said a former Japanese government official who worked on corporate management and governance issues.

"What they're doing actually hurts the company's credibility. But they think they are acting for the sake of the company," added the former official, who asked not be named.

Most major Japanese firms still hire university graduates right out of school and groom them to stay for their whole career.

Japanese firms are peppered with former bureaucrats given plum jobs in the industries that they once oversaw, despite many having few relevant skills or the incentive to question management. In Toshiba's case, an investigation of the 2015 accounting scandal found a pair of former diplomats on its audit committee who were not up to the task, among a litany of other problems. In the aftermath, Toshiba sold off assets - including a medical device unit and most of its home appliance business - and fired thousands. Now, it is in trouble again and has put its prized memory chip business on the block to raise cash. Japan adopted a corporate governance code nearly two years ago that backers hailed as a way to boost trust with foreign investors and avoid these kinds of scandals.
RELATED TOPICS