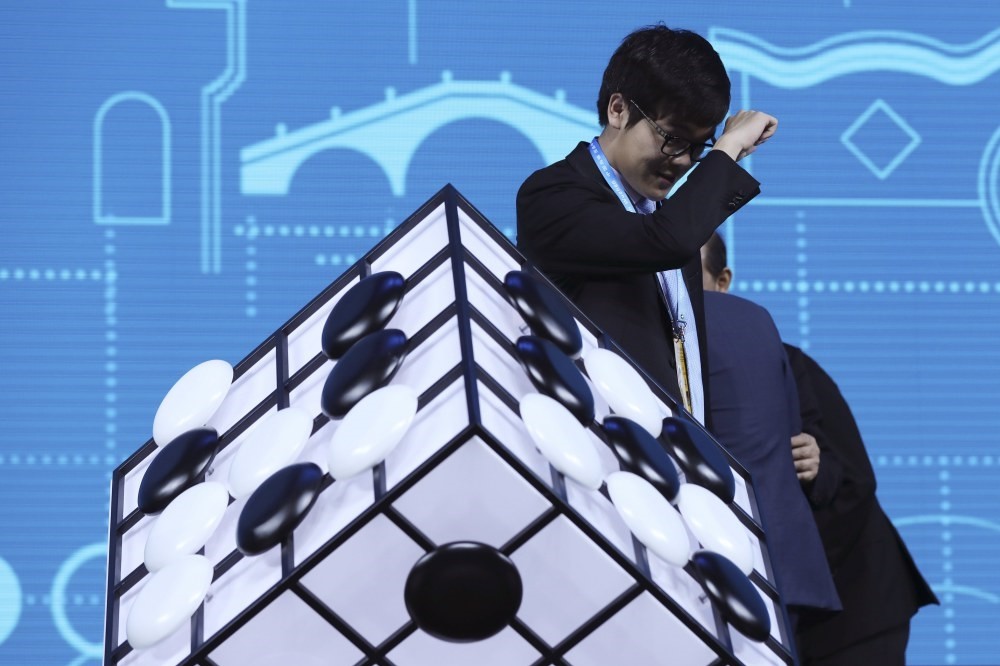 Chinese Go player Ke Jie attends the opening ceremony of the Future of Go summit ahead of a match between Ke Jie and Googleu2019s artificial intelligence program AlphaGo at Wuzhen Internet International Conference and Exhibition Center.
by May 24, 2017 12:00 am

A computer defeated China's top player of the ancient board game Go, earning praise that it might have finally surpassed human abilities in one of the last games machines have yet to dominate

Google's computer algorithm AlphaGo narrowly beat the world's top-ranked player in the ancient Chinese board game of Go yesterday, reaffirming the arrival of what its developers tout as a ground-breaking new form of artificial intelligence. AlphaGo took the first of a scheduled three games against brash 19-year-old Chinese world number one Ke Jie. AlphaGo stunned the Go community and futurists a year ago when it trounced South Korean grandmaster Lee Se-Dol four games to one. That marked the first time a computer program had beaten a top player in a full contest and was hailed as a landmark for artificial intelligence (AI). This week's match-up in the eastern Chinese city of Wuzhen, between Ke and an updated version of AlphaGo, has been highly anticipated amid speculation about whether AI could beat the world's top player.

But a visibly flummoxed Ke - who last year had declared he would never lose to an AI opponent - said AlphaGo had become too strong for humans, despite the razor-thin half-point winning margin.

"I feel like his game is more and more like the 'Go god'. Really, it is brilliant," he said.

Ke vowed never again to subject himself to the "horrible experience" of matching wits with the machine following this week's contests.

AlphaGo's feats have fuelled visions of a brave new world of AI that can not only drive cars and operate "smart homes", but potentially help mankind figure out some of the most complex scientific, technical and medical problems. Computer programs have previously beaten humans in cerebral contests, starting with the victory by IBM's Deep Blue over chess grandmaster Garry Kasparov in 1997.

But AlphaGo's success is considered the most significant yet for AI due to the complexity of Go, which has an incomputable number of move options and puts a premium on human-like "intuition", instinct and the ability to learn. Go involves two players alternately laying black and white stones on a grid, seeking to seal off the most territory.

Before AlphaGo, mechanical mastery of the game had been perceived to be years away. Its victories have been analysed and praised by students of the game as innovative and even "beautiful", opening up new ways of approaching strategy. AlphaGo uses two sets of "deep neural networks" containing millions of connections similar to neurons in the brain. It is partly self-taught, having played millions of games against itself following initial programming.

After Lee lost to AlphaGo last year, Ke boldly declared "Bring it on!"

But the writing was on the wall in January when Ke and other top Chinese players were flattened by a mysterious competitor in online contests. That opponent was revealed afterwards to be the latest version of AlphaGo, which was being given an online test run by its developer, London-based AI company DeepMind Technologies, which Google acquired in 2014.

Ke, a phenom who went pro at age 11 and has described himself as "pretentious", has vacillated between awe and disdain for AlphaGo.

He called it a "cold machine" lacking passion for the game in comments Monday night on China's Twitter-like Weibo platform. Ke and AlphaGo will face off again on Thursday and Saturday. For some, rapid advances in AI conjure sci-fi images of a "Terminator" future in which machines "wake up" and enslave humanity. But DeepMind founder Demis Hassabis dismissed such concerns."This isn't about man competing with machines, but rather using them as tools to explore and discover new knowledge together," he said before yesterday's match.

"Ultimately, it doesn't matter whether AlphaGo wins or loses... either way, humanity wins."