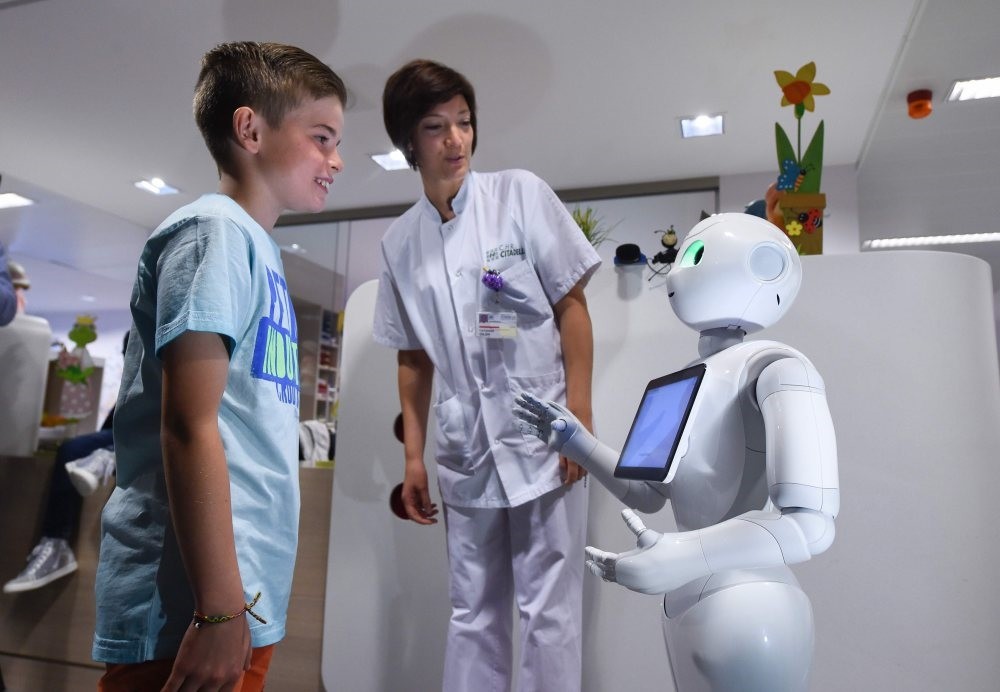 New robot popular with hospitals, conscript Pepper, is more than 140 centimeters tall, more mobile and programmed with a high level of hospitality. It was adapted to specific expectations of healthcare professionals to support the reception teams.
by Jun 20, 2017 12:00 am

Artificial intelligence is rapidly moving into health care, to diagnose and respond to a raft of conditions,led by some of the biggest in technology and emerging startups

Your next doctor could very well be a bot. And bots, or automated programs, are likely to play a key role in finding cures for some of the most difficult-to-treat diseases and conditions. Artificial intelligence is rapidly moving into health care, led by some of the biggest technology companies and emerging startups using it to diagnose and respond to a raft of conditions.

*Scientists from Harvard and the University of Vermont developed a machine learning tool, a type of AI that enables computers to learn without being explicitly programmed, to better identify depression by studying Instagram posts, suggesting "new avenues for early screening and detection of mental illness."

*Researchers from Britain's University of Nottingham made an algorithm that predicted heart attacks better than doctors using conventional guidelines.

While technology has always played a role in medical care, a wave of investment from Silicon Valley and a flood of data from connected devices appear to be spurring innovation.

"I think a tipping point was when Apple released its Research Kit," said Forrester Research analyst Kate McCarthy, referring to a program letting Apple users enable data from their daily activities to be used in medical studies. McCarthy said advances in artificial intelligence have opened up new possibilities for "personalized medicine" adapted to individual genetics.

"We now have an environment where people can weave through clinical research at a speed you could never do before," she said.

AI is better known in the tech field for uses such as autonomous driving, or defeating experts in the board game Go. But it can also be used to glean new insights from existing data such as electronic health records and lab tests, says Narges Razavian, a professor at New York University's Langone School of Medicine who led a research project on predictive analytics for more than 100 medical conditions.

"Our work is looking at trends and trying to predict (disease) six months into the future, to be able to act before things get worse," Razavian said.

NYU researchers analyzed medical and lab records to accurately predict the onset of dozens of diseases and conditions including type 2 diabetes, heart or kidney failure and stroke. The project developed software now used at NYU which may be deployed at other medical facilities.

*Google's DeepMind division is using artificial intelligence to help doctors analyze tissue samples to determine the likelihood that breast and other cancers will spread, and develop the best radiotherapy treatments.

*Microsoft, Intel and other tech giants are also working with researchers to sort through data with AI to better understand and treat lung, breast and other types of cancer.

*Google parent Alphabet's life sciences unit Verily has joined Apple in releasing a smartwatch for studies including one to identify patterns in the progression of Parkinson's disease. Amazon meanwhile offers medical advice through applications on its voice-activated artificial assistant Alexa.