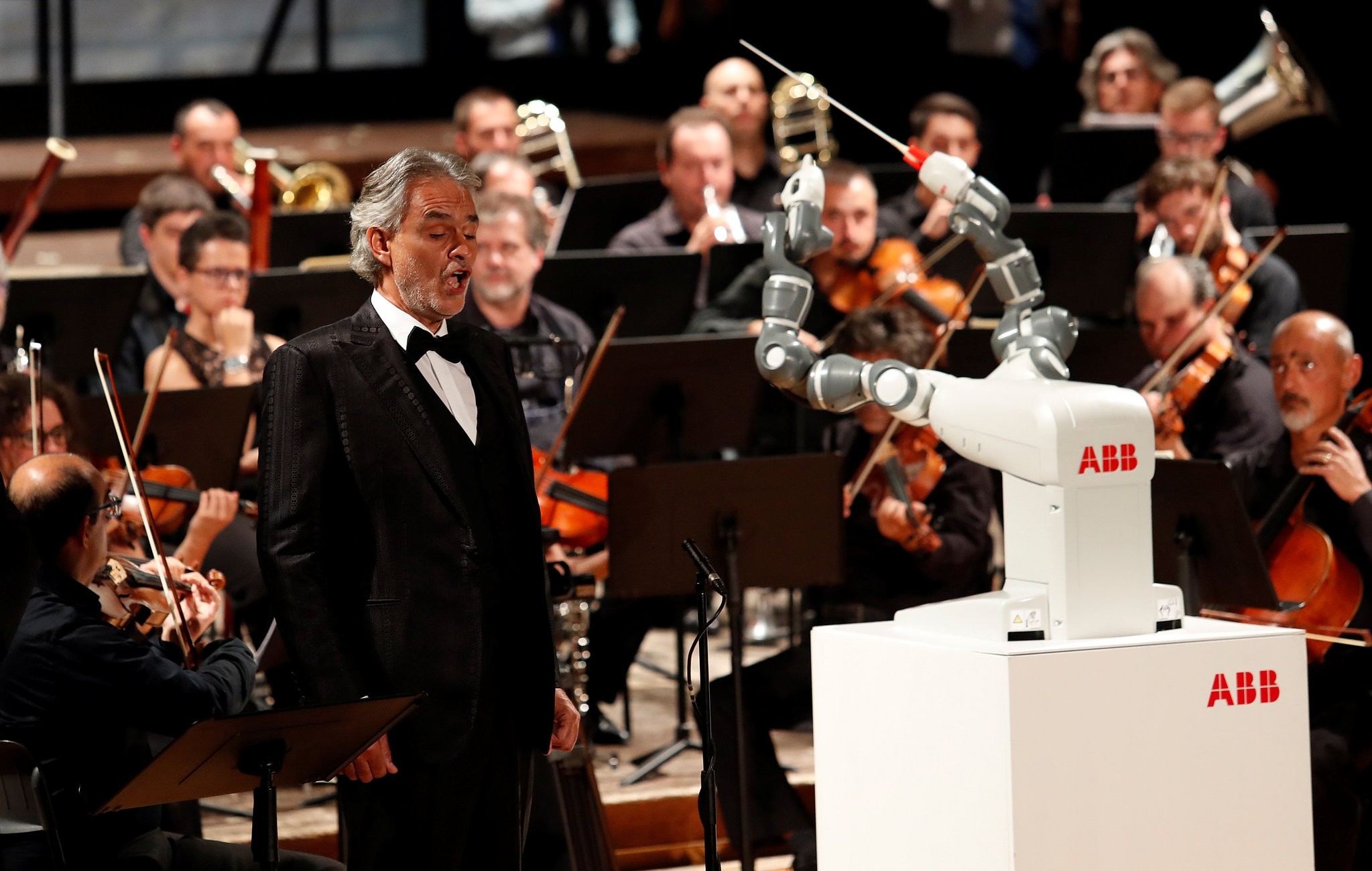 Italian tenor Andrea Bocelli's voice soars to the rafters of the Tuscan theater, but all eyes are on the orchestral conductor beside him -- a robot with an apparent penchant for Verdi.

The concert in the heart of Pisa is a world first, with two mechanical "arms" conducting live music at the grand finale of the first International Festival of Robotics.

The Swiss-designed YuMi sweeps its baton skywards with one hand, while the other curves around in a caress that spurs on the strings as the operatic "La Donna E' Mobile" ("Woman Is Fickle) reaches its climax.

But music lovers beware: YuMi can conduct set pieces, but cannot improvise, react or interact with the musicians.

"It was extremely difficult to train," says Andrea Colombini, the conductor of the Lucca Philharmonic Orchestra which performed with Bocelli and soprano Maria Luigia Borsi on Tuesday.

The maestro said the automaton was far more sophisticated than its "rival" Asimo, the white four-foot (1.2-metre) robot designed by Honda which conducted the Detroit Symphony Orchestra in 2008.

"We're not talking about Asimo's limited up-and-down, one-arm movement... YuMi is extremely flexible and its arms have the same mobility as mine," he told AFP.

YuMi does not stand, however: It sits on a pedestal that gives it the support it needs to move its long arms.

It's not a particularly friendly looking robot, and Colombini acknowledged that they did not get on at first.

"It was not love at first sight. At the start I kept getting wound up because it kept getting stuck, and when the robot gets stuck it takes 25 to 30 minutes to reset it," he said.

"It took a long time," he added: Training YuMi to perform six minutes of music "took 17 hours of work."

Borsi looked apprehensive as she stood in her shocking pink concert gown, waiting for the robot to begin directing the classic soprano aria "O Mio Babbino Caro" ("Oh My Beloved Father") by Puccini.

The effect is somewhat odd: the musicians watch for the first baton stroke and gamely follow it throughout the aria, but the traditional vitality of a human conductor -- keeping tempo with the whole body, even through the breathing -- is missing.

Bocelli, who is visually impaired, had to remember the tempo YuMi had been taught down to the second.

Any unprogrammed "accelerando" or "rallentando" would have been disastrous, as he had no way to get the conductor to follow his lead.

"There's no way it could replace the sensitivity and emotion of a conductor, because a robot has no soul. It's just an arm, not the brain, not the heart," Colombini said.

Later, when the conductor himself takes to the stage, his whole body sways and thrusts -- and the difference is startling.

"There's not much room unfortunately for improvisation, you have to go with the robot," says American violinist Brad Repp, who took part in the concert.

"It's a cool effect... but there's no way this could be the future," he said.