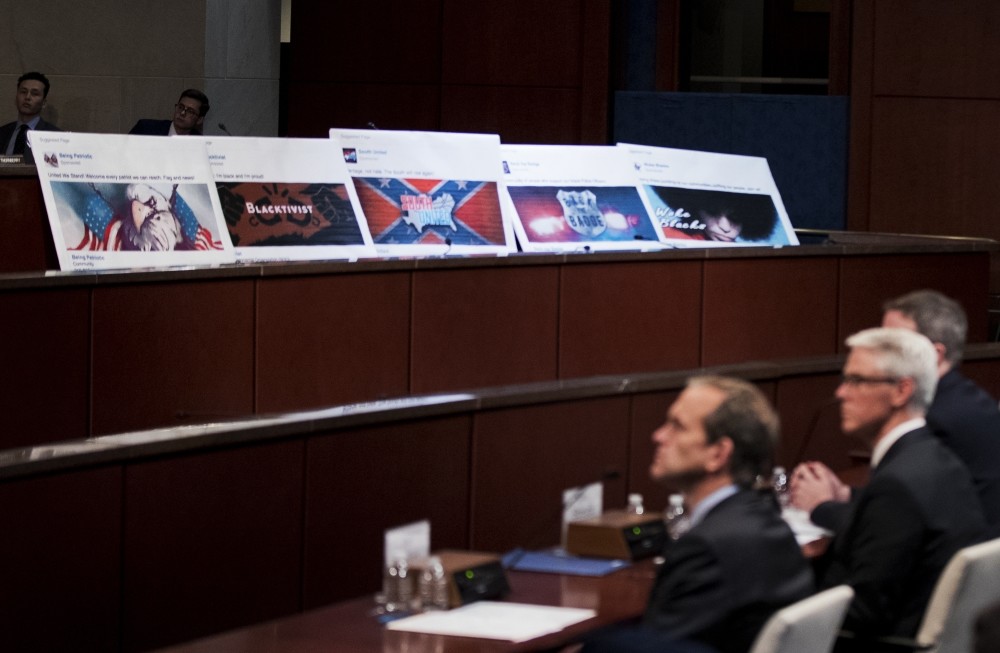 Facebook ads linked to a Russian effort to disrupt the American political process are displayed
by French Press Agency - AFP
Nov 03, 2017 12:00 am

The leading social network has posted $4.7 billion gains in profit as the company continues to face scrutiny over misleading content paid for by Russia-based operations during last year's U.S. presidential election

Facebook reported that profits leapt on booming revenue from online ads in the third quarter, topping investor forecasts and buoying shares already at record highs. The leading social network said it made a profit of $4.7 billion in the quarter that ended on Sept.30, a jump of 79 percent from the same period a year earlier. CEO Mark Zuckerberg used the update to address criticism of Facebook for allowing disinformation and manipulation during the 2016 U.S. presidential election, hours after the company's top lawyer faced a grilling at a Washington congressional hearing.

"Our community continues to grow and our business is doing well," Zuckerberg said.

"But none of that matters if our services are used in ways that don't bring people closer together. We're serious about preventing abuse on our platforms. We're investing so much in security that it will impact our profitability. Protecting our community is more important than maximizing our profits."

Investor enthusiasm may have been tempered by rising costs at the California-based internet giant and executives stressing the company is firmly in "investment mode" while predicting ad growth will slow.

"They made a ton of money, but the Russia investigation is clearly putting a cloud over everything for the moment," independent analyst Rob Enderle said.

"Sometimes it just takes a trigger event to cause a bunch of people to take their profit and go someplace else, especially if they have decided this is as good as it is going to get at Facebook for a while."

The analyst added that some investors might be worried that the probed into Russia's meddling with U.S. politics will result in regulation on social networks that might hurt profitability. Expenses rose to $5.2 billion from $3.9 billion in the same quarter last year, and headcount at the company was up 47 percent to 23,165 employees. "We will continue to invest aggressively in the many opportunities we see ahead," Facebook CFO David Wehner said during an earnings call with analysts. Zuckerberg outlined investment priorities that included video content, which he described as the biggest trend at Facebook.

The number of monthly active users at the social network continued to grow, reaching 2.07 billion, an increase of 16 percent from the same time last year. Advertising served up on smartphones or tablets accounted for about 88 percent of revenue taken in from marketing messages in the quarter, Facebook reported. The quarterly earnings report was released as Facebook and other internet titans testified this week before Congress about a Russian-led effort to spread misinformation and sow discord ahead of the 2016 U.S. election. Facebook told Congress on Wednesday that the apparent political meddling included use of its image-oriented messaging service Instagram.

Facebook general counsel Colin Stretch told a hearing that Instagram posts by suspect Russian accounts were seen by some 20 million Americans last year. "We now discovered, in the last 48 hours, 120,000 Russian-based posts on Instagram," Stretch told the Senate Intelligence Committee hearing. The latest data on Instagram is on top of the estimated 126 million Americans exposed to Facebook posts from Russian entities seeking to create divisions during the election campaign.

"So all told, that gets you to approximately - a little less than 150 million," Stretch said in response to questioning from Democratic Senator Mark Warner.