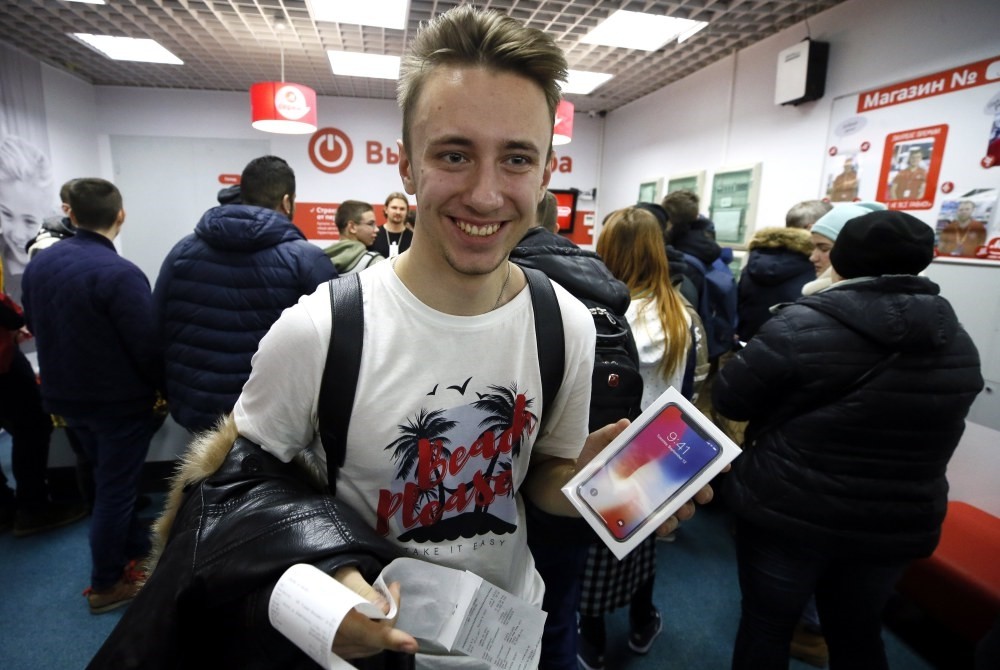 Customers buy the new iPhone X at M.video store in Moscow. Apple's new iPhone X goes on sale in more than 55 countries and territories on Friday.
by French Press Agency - AFP
Nov 04, 2017 12:00 am

Apple profits rose on the back of strong iPhone sales in the past quarter, with the U.S. tech giant shrugging off the lofty price of its new flagship iPhone X and predicting a stellar holiday season.

"The iPhone X orders are very strong; we couldn't be more excited to get underway," Apple CEO Tim Cook said during a quarterly earnings call. Cook added that Apple is working to increase iPhone X output to catch up to demand. The wait time for online orders stretched to an unprecedented six weeks shortly after Apple began taking orders last month, but it remained unclear whether demand or supply factors were the cause. Net profit rose 19 percent from a year ago to $10.7 billion in the fiscal fourth quarter to Sept. 30, Apple said. Revenues were up 12 percent to $52.6 billion. Apple sold more iPhones, iPads and Mac computers than it did in the same quarter a year earlier. Smartphones sales climbed by about a million units to 46.7 million in the three months winding up the California company's fiscal year, according to the earnings report.

"We're happy to report a very strong finish to a great fiscal 2017, with record fourth quarter revenue, year-over-year growth for all our product categories, and our best quarter ever for services," Cook said. Apple closed out its fiscal year posting a full-year profit of $48.35 billion, up 5.8 percent, on revenues of $229 billion, a rise of 6.3 percent from the previous year. In the latest quarter Apple was able to reverse its fortunes in China, boosting overall sales by 12 percent in the "Greater China" region. Sales were up in other regions except for Japan, which saw an 11 percent revenue drop. Analyst Patrick Moorhead, of Moor Insights & Strategy, said "Apple crushed" with a strong quarterly report showing improvements in all product categories and a 34 percent jump in services revenue. Moorhead said concerns that iPhone sales would weaken as customers awaited the newest device were unfounded.

"Apple managed to thread the needle on iPhone sales between the giant interest in the iPhone X and what the company had to ship, which was iPhone 7 and 8," he said. With the iPhone X launching Friday in about 50 markets around the world, Apple is setting the ambitious goal of reinventing the smartphone as it strives to fend off fierce competition from rivals, especially in China. The flagship handset marks the 10th anniversary of the first iPhone release. The iPhone is the main profit driver for Apple, accounting for more than half its revenues, and is the cornerstone for the ecosystem of other devices and services. Apple upped the ante by boosting the starting price of the iPhone X to $999 for U.S. customers, a price that will be higher in other markets and with extra options.

When asked about the high price during the earnings call, Cook pointed out that the iPhone line has models costing much less than the 10th-anniversary version. "We tried hard to have an iPhone that is as affordable as possible for people who want an iPhone but have a more limited budget," Cook said.

"This is the first time we have had three iPhones new at the top of the line at once, so see what happens. We are bullish."

Cook has described the iPhone X as the future of the smartphone, packed with technology including facial recognition, cordless charging and an edge-to-edge screen made of organic light-emitting diodes used in high-end televisions.