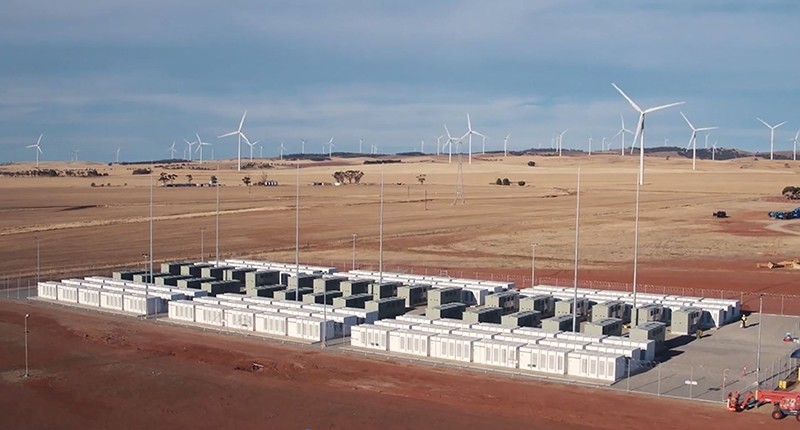 The world's largest lithium-ion battery was officially turned on in South Australia Friday, touted as "a landmark moment for renewable energy" by the state government.

Tesla boss Elon Musk had famously promised to build the 100-megawatt battery in July, saying if it was not completed within 100 days, he would provide it for free - a challenge he met easily.

The Powerpack system battery is connected to a 99-turbine wind farm at the Hornsdale Power Reserve, owned by French energy provider Neoen, some 200 kilometers north of Adelaide, the state capital.

South Australian Premier Jay Weatherill flicked the switch on, saying it was "history in the making."

"South Australia is now leading the world in dispatchable renewable energy, delivered to homes and businesses 24/7," he said.

The 129-megawatt-hour battery is large enough to power 30,000 houses for up to an hour in the event of a severe blackout and has the ability to act both as a backup generator in emergencies, as well as charge to and from the national grid.

The state government and its energy policies came under heavy scrutiny last year after a storm caused a blackout across the entire state in September 2016.

The storm destroyed transmission lines and other infrastructure, leaving 1.7 million residents without electricity for days.

Also, South Australia faced planned power cuts, known as load-shedding, in February and March this year as there was not enough electricity to meet demand.

Soon afterward, the state government announced a half-billion-dollar energy plan of which battery storage was a key part. As a part of that package, it also owns operates a 250-megawatt gas-fired plant and supports a solar-thermal power plant.

The government hopes the newly installed battery will also help in "putting downward pressure on prices." It already dispatched some power into the state's electricity grid Thursday afternoon after parts of the state hit temperatures above 30 degrees Celsius.

"The completion of the world's largest lithium-ion battery in record time shows that a sustainable, effective energy solution is possible," Tesla said in a statement.

"We are proud to be part of South Australia's renewable energy future, and hope this project provides a model for future deployments around the world."

The total cost of the project is estimated to be around $50 million (38 million Australia dollars), according to local media, though the state government has not confirmed the expenses.