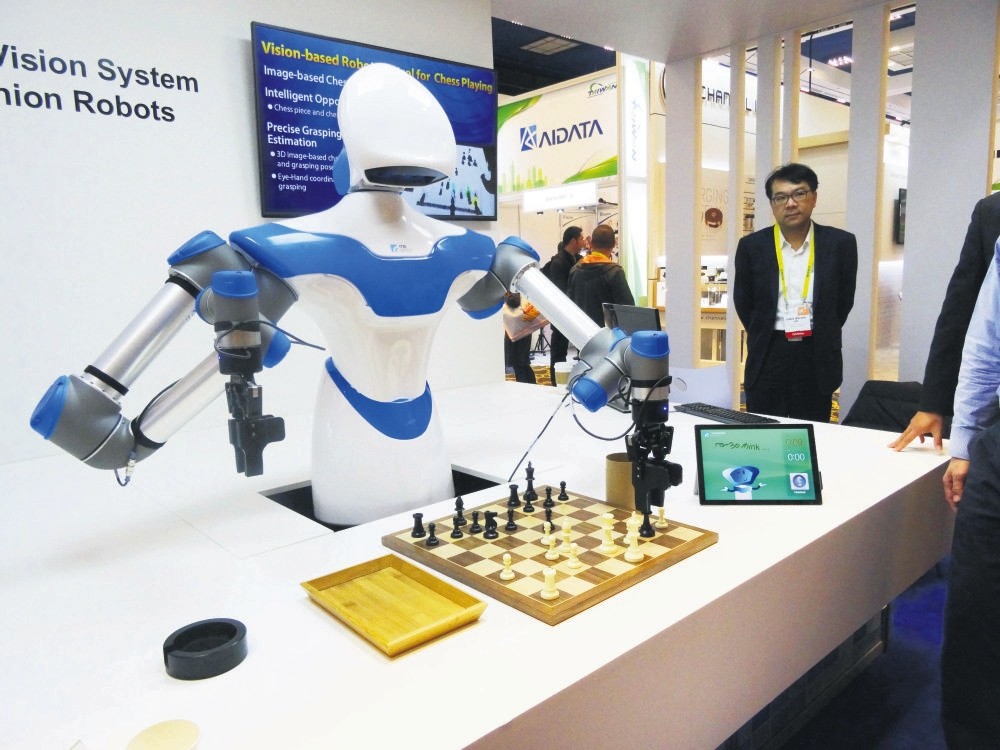 A robot developed by Taiwan engineers moves chess pieces on a board against an opponent at the 2017 Consumer Electronic Show in Las Vegas, Nevada.
by Jan 04, 2018 12:00 am

Giving gadgets brains will be a hot theme at the Consumer Electronics Show (CES) set to open in Las Vegas, with device makers big and small touting hardware with "smarts."

Whether it's a doorbell or refrigerator, a TV set or a toothbrush, chances are it will be connected to digital assistants powered by artificial intelligence aiming to anticipate needs or desires.

"I think you're going to see the year of smart," said Jack Gold, a technology analyst with J. Gold Associates.

One of the largest trade shows in the world, the CES from Jan. 9 to Jan. 12 will attract about 170,000 visitors and 3,900 exhibitors from 150 countries and will showcase innovations in computers, gaming, robotics, vehicle technology, virtual and augmented reality and more.

Gold said gadgets will be increasingly tuned to glean insights about the people using them, with an aim of anticipating what might be desired at any given moment.

"Your device will learn about you and will know your preferences, and it'll then try to get smarter about how to interact with you," he said.

"I think you are going to be overwhelmed by smart homes and voice - the voice speakers yelling at you in the convention center and up and down the [Las Vegas] Strip will be overwhelming," Baker said of CES. He said gadget makers will infuse more products and services with virtual aides such as Amazon's Alexa, Google Assistant, Apple Siri and Microsoft Cortana.

"What happened is all the appliance and device guys gave up [on making their own isolated smart home systems] and instead are building an ecosystem in which pretty much everybody's devices will talk to Google or Amazon, or eventually Siri," Baker said. Still, says Gartner analyst Brian Blau, large and small tech firms are locked in battle to be at the heart of smart homes and devices.

"To some degree there is still a war on for the connected home platform," Blau said. "Communication standards are being worked out, but the other thing is whose allegiance you will commit your home to - will it be Samsung, LG, Amazon, Google?"

Carolina Milanesi of the consultancy Creative Strategies said major electronics firms like Bosch, Panasonic, Sony, Samsung are looking to showcase how several devices can work together with a connected hub.

Major carmakers will be on hand as well as makers of tech platforms for self-driving vehicles such as Intel's Mobileye and chipmaker Nvidia, along with a dozen exhibitors in the autonomous car "marketplace."