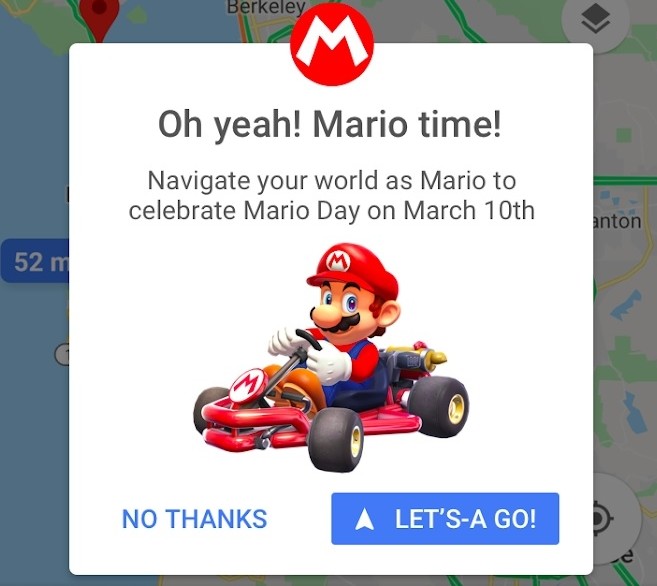 To celebrate its iconic mascot Mario "and his many awesome fans" around the world, Nintendo has announced that it has teamed up with Google to bring its beloved character to Google Maps.

The new Google Maps update "Mario Time" will officially be out for iOS and Android users worldwide starting Saturday March 10, and this feature will be available for the next seven days.

March 10, known as "MAR10" Day by gamers, is an annual fictional holiday to celebrate Mario, the world's most loved animated plumber.

To go about your day as Mario, you'll have to have the latest update of the Google Maps app on your phone. After choosing a place or address to navigate to, you'll see a gray "?" block to the left of the "Navigate" button at the bottom right corner of the screen. When you click on it, the "?" icon will turn yellow and the message "Oh yeah! Mario time!" will appear, giving you the option to say "Let's-A-Go" to Mario. 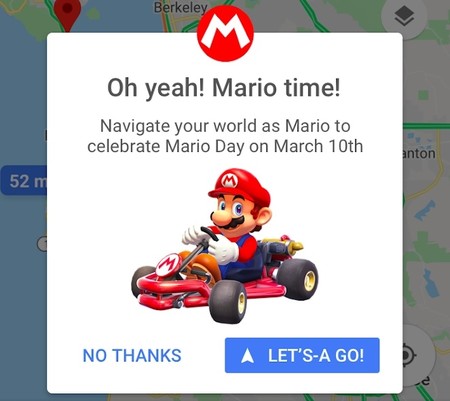 With the update, the Google Maps navigation arrow showing you your location will turn into Mario driving his signature Kart - red shells not included.

Google says Mario will be a "constant companion" wherever you drive this week, but also issues a friendly reminder about safe driving.

"Just remember to practice safe driving on the road—we don't encourage throwing bananas or red shells at other drivers in real life!" it says, in a fun reference to the Mario Kart games.

There is another Easter Egg hidden inside the update for Google Maps. If you press the "?" block repeatedly a hundred times you will hear the sound for "1-UP" as you do in Mario games.

Nintendo is also offering a 50 percent discount on Super Mario Run for the occasion of MAR10 Day. Although the app is free to download, users have to pay $9.99 to unlock the full game with all of its additional levels and characters. But with Nintendo's discount, which will run for two weeks through March 25, users will only have to pay $4.99 on the Apple App Store and Google Play.

The update is definitely an exciting surprise for Mario fans, but Nintendo lovers will have to wait until next year for the release of the Mario Kart Tour game.