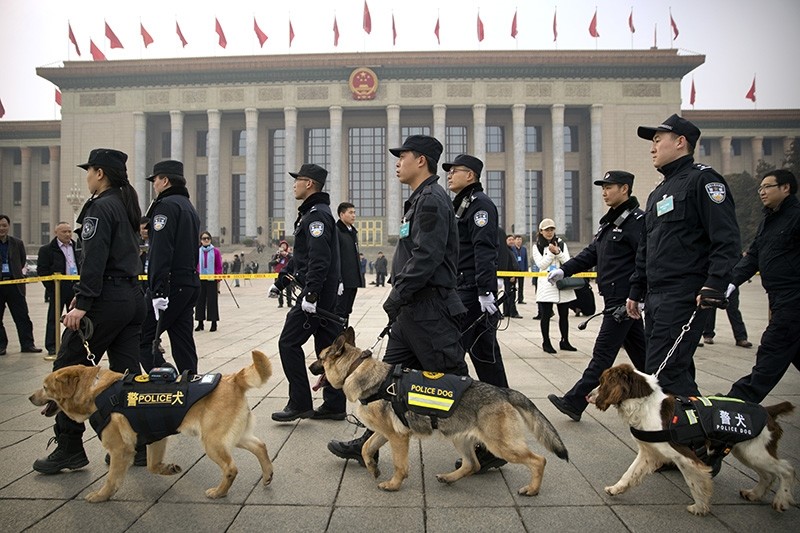 Police dogs and their handlers walk past the Great Hall of the People during the opening session of the Chinese People's Political Consultative Conference (CPPCC) in Beijing, Saturday, March 3, 2018. (AP Photo)
by Daily Sabah with Reuters Mar 13, 2018 12:00 am

The most recent advancement in China's facial recognition surveillance software is being sported by police officers at roadside checkpoints: glasses that scan and identify faces within three seconds.

The technology, which was first noted in use on March 10 outside Beijing, is supposedly able to scan and identify faces, then provide identity information, such as plate registration numbers, to police in real time.

The AI-powered glasses, made by LLVision, scan the faces of vehicle occupants and the plates, flagging with a red box and warning sign to the wearer when any match up with a centralized "blacklist."

The test – which coincides with the annual meeting of China's parliament in central Beijing – underscores a major push by China's leaders to leverage technology to boost security in the country.

That drive has led to growing concerns that China is developing a sophisticated surveillance state.

"[China's] leadership once felt a degree of trepidation over the advancement of the internet and communication technologies," said David Bandurski, co-director of the China Media Project, a media studies research project at the University of Hong Kong.

"It now sees them as absolutely indispensable tools of social and political control."

Wu Fei, chief executive of LLVision, said people should not be worried about privacy concerns because China's authorities were using the equipment for "noble causes," catching suspects and fugitives from the law.

"We trust the government," he told Reuters at the company's headquarters in Beijing.

The new technologies range from police robots for crowd control, to drones to monitor border areas, and artificially intelligent systems to track and censor behavior online. There are also scanners to forcibly read mobile phone data and even police dogs with virtual reality cameras.

At the meeting of the NPC, most delegates said the increasing use of technology to improve state security was a positive, and that the benefits far outweighed privacy concerns.

"This is a good thing, it means our technology is really leading the world," said Lu Yaping, a delegate from Jiangsu province in eastern China. "I don't have any concerns about safety."

China dished out $6.4 billion on surveillance in 2017, with that number rising at a steady annual 12 percent. The country now uses 176 million active surveillance cameras, expected to number 626 million by 2020, according to research firm IHS Market.

While the People's Republic has gotten a bad rap for its societal controls, other countries are looking into advanced surveillance systems similar to the police glasses. Germany announced in August it would test a biometric recognition system for Berlin's subway.