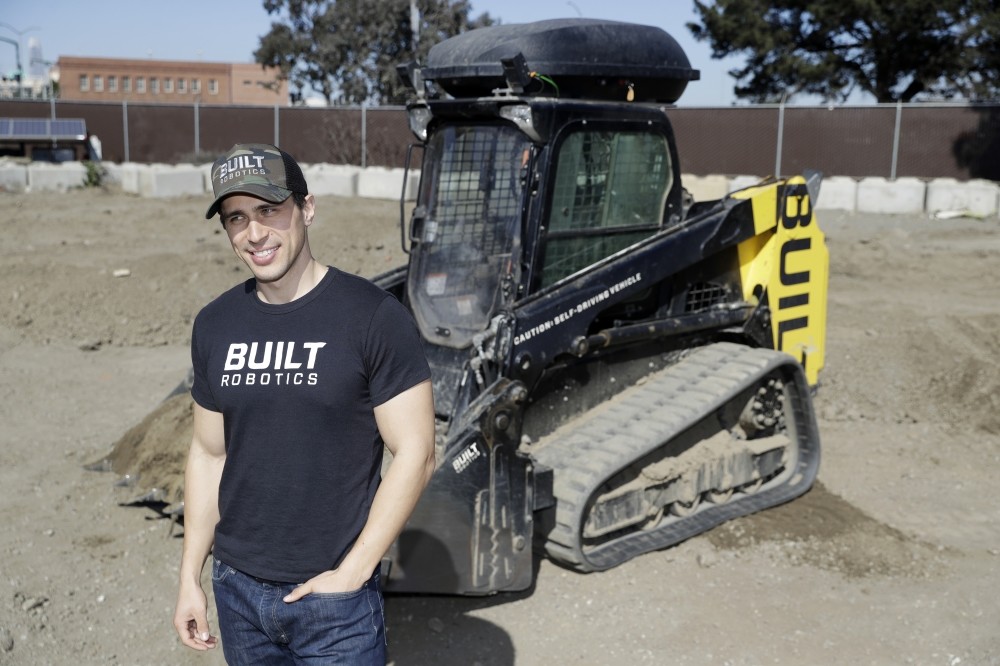 Built Robotics CEO Noah Ready-Campbell poses for a picture in front of the company's autonomous track loader in San Francisco.
by Associated Press Mar 20, 2018 12:00 am

A former Google engineer' startup is developing technology to allow bulldozers, excavators and other construction vehicles to operate themselves, changing the nature of construction work

As a teenager working for his dad's construction business, Noah Ready-Campbell dreamed that robots could take over the dirty, tedious parts of his job, such as digging and leveling soil for building projects. Now the former Google engineer is turning that dream into a reality with Built Robotics, a startup that's developing technology to allow bulldozers, excavators and other construction vehicles to operate themselves.

"The idea behind Built Robotics is to use automation technology make construction safer, faster and cheaper," said Ready-Campbell, standing in a dirt lot where a small bulldozer moved mounds of earth without a human operator. The San Francisco startup is part of a wave of automation that's transforming the construction industry, which has lagged behind other sectors in technological innovation. Backed by venture capital, tech startups are developing robots, drones, software and other technologies to help the construction industry to boost speed, safety and productivity. Autonomous machines are changing the nature of construction work in an industry that's struggling to find enough skilled workers while facing a backlog of building projects.

"We need all of the robots we can get, plus all of the workers working, in order to have economic growth," said Michael Chui, a partner at McKinsey Global Institute in San Francisco. "As machines do some of the work that people used to do, the people have to migrate and transition to other forms of work, which means lots of retraining."

Workers at Berich Masonry in Englewood, Colorado, recently spent several weeks learning how to operate a bricklaying robot known as SAM. That's short for Semi-Automated Mason, a $400,000 machine which is made by Victor, New York-based Construction Robotics. The machine can lay about 3,000 bricks in an eight-hour shift - several times more than a mason working by hand. SAM's mechanical arm picked up bricks, covered them with mortar and carefully placed them to form the outside wall of a new elementary school. Working on a scaffold, workers loaded the machine with bricks and scraped off excess mortar left behind by the robot. The goal, said company president Todd Berich, is to use technology to take on more work and keep his existing customers happy. "Right now I have to tell them 'no' because we're at capacity," he said.

Bricklayer Michael Walsh says the robot lessens the load on his body, but he doesn't think it will take his job. "It ain't going to replace people," Walsh said. The International Union of Bricklayers and Allied Craftworkers isn't too concerned that robots will displace its members anytime soon, according to policy director Brian Kennedy. "There are lots of things that SAM isn't capable of doing that you need skilled bricklayers to do," Kennedy said. "We support anything that supports the masonry industry. We don't stand in the way of technology."

The rise of construction robots comes as the building industry faces a severe labor shortage.

A recent survey by the Associated General Contractors of America found that 70 percent of construction firms are having trouble finding skilled workers. At Built Robotics, Ready-Campbell, the company's founder and CEO, envisions the future of construction work as a partnership between humans and smart machines. Built Robotics recently used its automated bulldozer -retrofitted with sensors and autonomous driving technology -to grade the earth on a construction site in San Jose. The project allows the startup to both test its technology and generate some revenue.