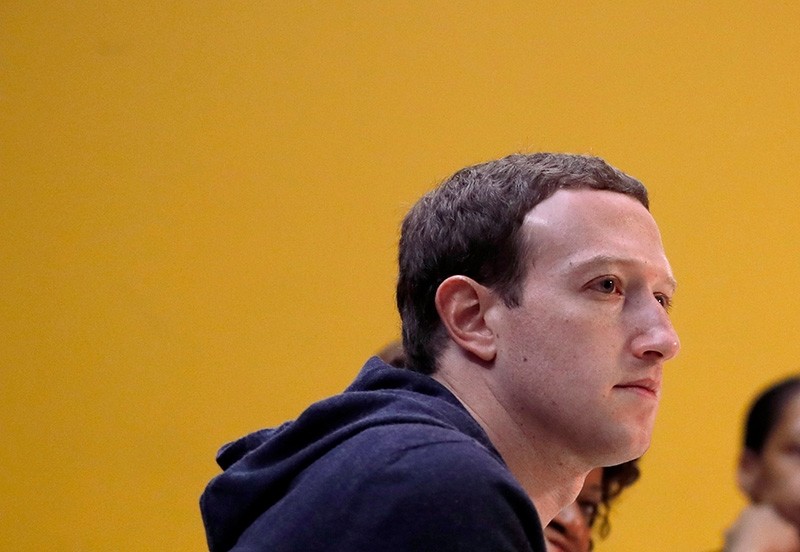 In this Nov. 9, 2017, file photo, Facebook CEO Mark Zuckerberg meets with a group of entrepreneurs and innovators during a round-table discussion at Cortex Innovation Community technology hub in St. Louis. (AP Photo)
by Daily Sabah with Reuters Apr 05, 2018 12:00 am

Facebook was hit with a new probe and a hefty fine Thursday, another blow to the social media giant in the wake of a data breach scandal.

In a case unrelated to Facebook's most recent woes, a Brazilian judge ordered that the company pay 111.7 million reais ($33.4 million) for failing to cooperate with a corruption investigation in the state of Amazonas, federal prosecutors said Thursday.

Facebook was fined for failing to give access in 2016 to WhatsApp messages exchanged by individuals under investigation for an alleged scheme to defraud the state's health system, prosecutors said in a statement.

Meanwhile, investigators on two U.S. congressional panels are looking into whether Russia acquired the data of millions of Facebook users and if companies with ties to then-2016 Republican election candidate Donald Trump's campaign played any role in providing it, three sources familiar with the inquiries said.

Last September, Facebook disclosed that it had suspended about 470 "inauthentic accounts" that it believed were "likely operated out of Russia" and had purchased 3,000 ads which "appeared to focus on amplifying divisive social and political messages."

And on Wednesday, the social media platform said the personal information of up to 87 million users, mostly in the United States, may have been improperly shared with political consultancy Cambridge Analytica, up from a previous news media estimate of more than 50 million. Chief Executive Officer Mark Zuckerberg will testify on April 10 and 11 to Congress.

In an indictment in February, Robert Mueller, the special counsel investigating possible Russian meddling in the 2016 U.S. presidential campaign, charged IRA and 13 Russians with conspiring to interfere in U.S. politics and elections. Moscow denies tampering in U.S. elections and President Trump denies any coordination between his campaign and Russian officials.

Among the issues investigators on the U.S. Senate Intelligence Committee and Democrats on the House Intelligence Committee are digging into are whether IRA and other Russian organizations used any Facebook data, the sources said, speaking on condition of anonymity. Also, whether the use of such data had any impact on the U.S. election, and how much Facebook data may have been acquired by Russian entities, the sources said.

Zuckerberg said that because of the way the Facebook platform worked at the time, this gave Kogan access to data of "tens of millions" of friends of users who took the quiz.

On Wednesday, Mike Schroepfer, Facebook's Chief Technology Officer, acknowledged in a public posting that "the Facebook information of up to 87 million people - mostly in the U.S. - may have been improperly shared" with Cambridge Analytica.

Cambridge Analytica said in a statement on Wednesday that it "did not use any" data it acquired from Kogan's company in work related to the 2016 U.S. presidential campaign. The firm added that it took legal action against GSR, and that it "immediately deleted the raw data" from its server when it learned from Facebook that the data had been "improperly obtained."

Representative Adam Schiff, the House intelligence committee's top Democrat, sent Kogan a letter requesting correspondence and message traffic on his dealings with Cambridge Analytica and former Trump adviser Steve Bannon, any material related to Russia, and that Kogan agree to an interview.

Kogan said in an email to Reuters that he knows nothing about Facebook data being obtained by Russia and had never heard of the Internet Research Agency "until a few weeks ago."