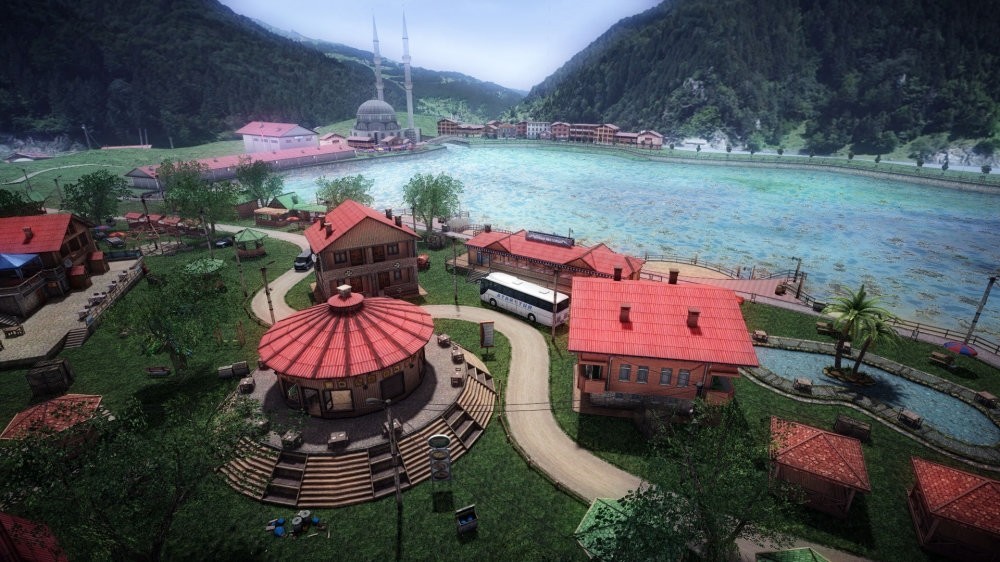 A screenshot from a 3D next generation first person shooter game developed by Turkish entrepreneurs. The game depicts picturing various places in Turkey such as northern Black Sea district Uzungu00f6l.
by Daily Sabah with AA May 09, 2018 12:00 am

Turkish game developers' exports surged by 40 percent in 2017 compared to the previous year, reaching $700 million. Having broken export records in succession, the sector aims to export $1 billion this year.

Economy Minister Nihat Zeybekci underscored that Turkish game developers who have developed games that are attracting attention all over the world maintain the success they have achieved in exports.

Zeybekci stressed that the game development sector is scoring with the gamers who continuously work on the development of new games and make a difference in foreign trade on the other.

The minister stated that according to the Game Developers Association of Turkey (TOGED), the sector increased its exports by 25 percent in 2016 compared to the previous year and reached $500 million, breaking a record in exports. He also said with the increasing interest in Turkish game developers' games and the new additions to existing games, a new export record was broken last year, adding that exports of the sector increased by 40 percent in 2017, reaching $700 million.

"The sector broke successive records in the previous year and now aims to export $1 billion this year. We, as the Ministry of Economy, will continue to support the gaming software sector," Zeybekci added.

Zeybekci noted that the sector has broken new records every year in exports. Stressing that Turkish game developers are also preserving their target of $2.5 billion to $10 billion for 2023, Zeybekci said besides their success in exports, games developed in Turkey were also awarded at many prestigious international competitions last year.

TOGED Chairman Ali Erkin said that interest shown in the games developed in Turkey continue in the international arena.Erkin stated that the new games of individual developers and gaming companies, which have reached a massive volume of followers, as well as new versions of existing games are anticipated all over the world. He expressed that the sector is happy to turn this international interest in the an operation that brings foreign exchange to the country, adding that the sector is proceeding with sure steps towards their targets.

TOGED Chairman Erkin underlined that support provided for the game development sector has made a significant contribution in this regard. He said they received support from various institutions, especially the Ministry of Economy, in this process.

"While referring to this support, we should convey our special thanks to the Minister of Economy Nihat Zeybekci and Turkish Exporters' Assembly (TİM) Secretary General Halil Arslan. They opened their doors whenever we needed them and always stood by our side to overcome the forces we faced," Erkin said.

"More than 90 percent of our sales are made abroad. We grow steadily in this sense. Besides economic activities, the sector's development is our most important agenda item. We are in contact with relevant institutions about what needs to be done for this, and there are steps we have taken," Erkin continued. "We are striving to change the public view of the sector and to bring a qualified workforce in the sector."Suggesting that along with the growth in the sector and companies, the need for human resources also grows, Erkin stressed that the doors of the sector are open for anyone who worked on various areas of game development and created concrete works during the course of their education. "From now on, we will try to grow our sector as well as train the human resources needed," Erkin concluded.