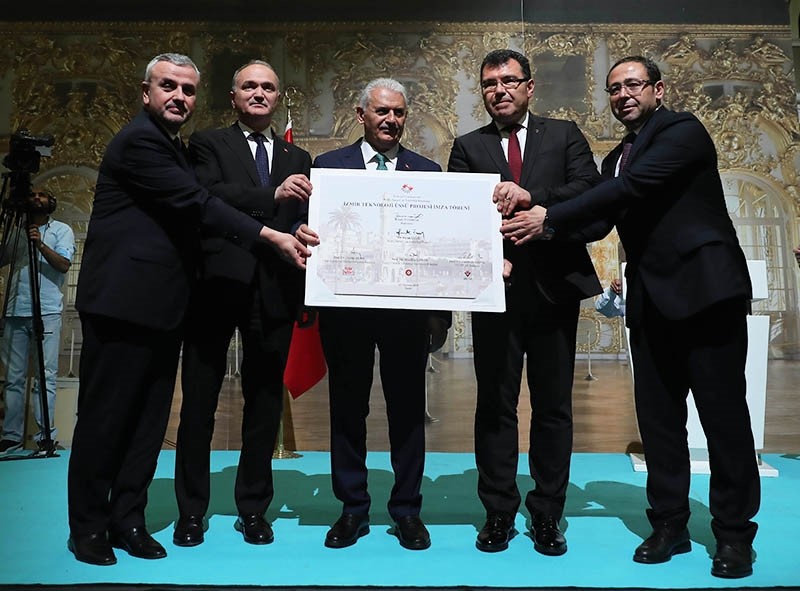 The Turkish government has unveiled the Izmir Technology Base, which will bring together hundreds of technology companies in the Aegean city.

Prime Minister Binali Yıldırım said Tuesday the Izmir Technology Base will add $15 billion to the country's national income in 10 years.

Speaking in Izmir at an introductory meeting of the base, Yıldırım said the base will directly and indirectly generate around 40,000 jobs for youth and researchers in the long term.

The center, expected to cover a 9.5-million-square-meter area, will serve as a hub for technological research and development for both "local and global companies," Yıldırım said, adding that other projects will follow this initiative.

"We aim to increase the number of companies in the Izmir Technology Base to 800 in 10 years," Yıldırım said.

Izmir is a prime location to serve as a tech hub, with its eight universities, four technoparks and rapidly increasing number of R&D and design centers.

"Since last year, we have been working on establishing an international technology development zone in the region where Izmir Institute of Technology is located. We were convinced that Izmir could be the base for this sector," he said.

Özlü said the Izmir Technology Base will be specially equipped for research in agrotechnology, biotechnology and petrochemicals.

"We will make an investment of 1.4 billion Turkish liras [$308 million] in 10 years through public-private partnership for the establishment of the tech base," he added.

Izmir, Turkey's third-largest city with a population of 4.3 million, creates 6.23 percent of the country's gross national product (GNP) with $14,257 in per capita income. It ranks fourth in export figures, according to Turkey Exporters' Assembly (TIM) data, and is second after Istanbul with 77 companies among the top-1,000 exporters. Despite these shining figures in the economy, the city has not had the same success in creating employment for an educated and well-qualified workforce.

Important investments in infrastructure, transport and logistics started with the '35 Izmir 35 Project' program initiated by Yıldırım, to mobilize the potential of the city in 2011, when he was a deputy candidate from the city.

According to the Economy Ministry, the city increased its investment amount for an incentive certificate to TL 7.6 billion ($1.6 billion) last year by increasing fourfold, compared to the previous year. It also managed to cover TL 2.6 billion ($570 million) of these investments with foreign capital.

According to the World's Most Competitive Cities report released by U.S.-based Conway Inc., Izmir was the most competitive in aerospace in 2015, third in chemicals and plastics and fifth in energy.

The city hosts Lisi Aerospace, which produces parts for commercial aircraft, PFW and Fokker Elmo in addition to the Kale-Pratt & Whitney plant, which produces motor parts for the F-35 fighter jet project; it is also in a privileged position with the Petkim and Tüpraş facilities in petrochemicals.